Since 1997, they have enjoyed as much recognition in black-metal forged Folk Metal as they have been able to generate enthusiasm on a qualitative level.

And even if there hasn't been another Finntroll album since „Blodsvept“ was released in 2013 - the sly mystics and Humppa speedsters are definitely not on the lazy side, as vocalist Mathias ‚Vreth’ Lillmåns reports on the upcoming longplayer „Vredesvävd”.

What a return! How does it feel for you?

„Really excited to finally have the album finished and unleashed upon the world in a couple of weeks! Been a long process and can’t wait to see if the fans think it was worth the long wait.“ 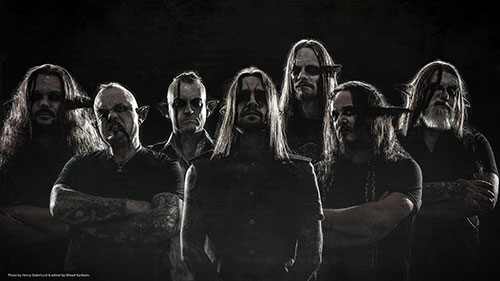 How did the long break come about and what was the motivation for the return of Finntroll?

„It’s funny how people think we were on some kind of break. During the seven years of no new music we were actually touring a lot. Last year we played a lot of festivals and also had quite many weekends with club gigs.“

„We are not the kind of band that write material on tour and for the three years that followed the release of the ‚Blodsvept‘ album we toured really heavily and then sort of went straight on to do a 10-year anniversary tour of the ‚Nattfödd‘ record. We tried to write some new material around that time, made a couple of full songs even, but it didn’t sound right. There was something missing and the material was really going in multiple directions that didn’t fit together. We decided to just continue doing gigs and see what happens. For some reason a couple of years went by like really quickly and last year we decided that we have to have an album out in 2020 or else people will start to forget about us. We got a deadline from Century Media and sort of re-wrote the all the songs and made new ones in half a year. Here we are now with a brand new album ready to be unleashed upon the world!“

How did you manage to keep your original style for the new album as well?

„I guess when Trollhorn and Tundra start writing music the sound just appears. The melancholic melodies are still there after 23 years since the band started.“

When did you actually start songwriting for „Vredesvävd“ and what does the title mean?

„As stated earlier, we already started writing in 2015, but like 80 % of the album is written between last autumn and early this year! The title means ‚wrath-woven‘ if you directly translate it into English.“

More than 1,5 decades ago it was a truly boom - how do you see the Heathen (Folk) Metal scene now?

„It definitely was! I think it has gone back to being a bit more underground again, which I actually don’t mind. It felt like there was too many bands out there at some point that just did this kind of style just because it was popular. The whole scene got so watered down and over exposed that we really lost interest and started to tour with bands outside our scene.“ 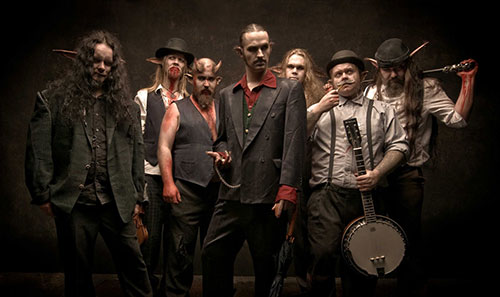 „Trollhorn is once again the main man, but with Tundra chipping in with some riffs and ideas across the record. I was also a bit more involved this time and produced and arranged quite a lot of it.“

Do you remember any ups and downs - what have been the hardest or most difficult passages of the whole songwriting-process?

„Definitely the hardest part was to decide what kind of music we want on this album. It’s always finding that red thread that takes the longest. When it has been found the material starts to flow at a totally different kind of pace.“

Allowed to ask about any special musical influences which led to the new material?

„We actually never have any references to other bands when we write stuff. I guess if we start looking for influences I’d say that we really looked back into our older discography for sources of inspiration this time. You can really hear that some songs could belong on the ‚Jaktens Tid‘ or ‚Nattfödd‘ albums!“

In which position between similar acts do you see your own band as one of the pioneers nowadays?

„Finntroll was one of the first bands in the genre and will definitely be one of the bands that has brought a lot to the scene. Be it a good or a bad thing!“

On Metal Archives: „Although they are from Finland, their lyrics are in Swedish as Katla is Fenno-Swedish (a minority in Finland whose primary language is Swedish).“ … be so kind and tell more about!

„Yes, me and Katla are Fenno-Swedes. We are born in Finland, but into Swedish speaking homes. We both have been raised around Swedish, but still consider ourselves to Finnish citizens. There’s not many of us left, maybe 250.000 here in Finland. Finland is a bilingual country which means we have two official spoken languages, Finnish and Swedish. Everyone here must study both languages during elementary school, for example! Also road signs, grocery store items, doctors and teachers need to use both languages.“

How much are you still interested in the current music world, especially the global Pagan/Viking Metal scene?

„Can’t really say that I have been too keen on checking out new or old bands within the scene since the overdose we had around 2010-2012. Right now I am quite lazy with checking out new bands, since I have made four full-length albums within a year and feel like any chance I can get to rest my ears is good idea!“

„I really want everyone to stay safe and check out our tour-dates, lots of gigs are being scheduled as we speak and we will definitely be out on the road as soon as borders start to open up. See you out there next year!“