The sextet founded in 2009 presents its third album „Enigma“. The Athenians around the beauty-and-the-beast singing duo Fiona Creaby and Vlasis Katsaounis present their Symphonic Gothic Metal with some surprising (Rock) facets.

I talk to keyboarder and main composer Gus Dibelas.

Is there anything deeper behind the band’s name Fallen Arise?

„Actually the name is a combination of two completely different words. As you understand these words are in the front line of everything, in our existence and in other things existence too.You can find them everywhere, we all feel happy, we all feel sad sometimes. Music in general is a great example of this combination. For me that's the meaning behind the name.“ 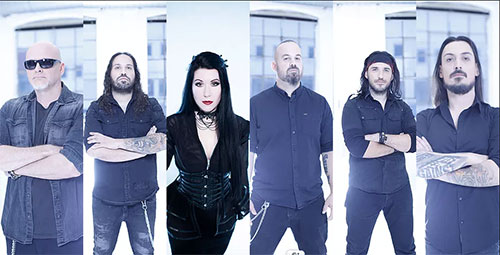 Please describe the main musical character of „Enigma“ with your very own words!

„'Enigma' is far different from the previous two albums. It follows another path which was a bands' decision. Off course the main elements of our music are still there but changed. The way we used them varies a lot. Even the way that we composed the new material was different. I could describe 'Enigma' as the starting point of a new era for Fallen Arise.“

„Enigma" - what is behind these title?

„We wanted from the beginning to have a deeper meaning in the title. But not something specific for all listeners. So every song could be an enigma. The riddles caused by our album to the listener, how he analyzes them and what conclusions he obviously draws and is of great interest to us, I would say we are looking forward to his verdict!“

What is the most important for you on „Enigma"?

„I could say that the music into it is what makes 'Enigma' unique. We pushed ourselves a lot to take our songs to another level and creating a whole new dimension. You can hear that this album is not a replica of what we did before. It has new elements, that you will not hear on 'Ethereal' and 'Adeline'. Also, the production of the album is something really important for us on this album. Our target was to create something fresh and into his age and i think that all of us who worked on this album, by giving our best, we made it!“

„As you hear the album you will feel a lot of emotions, sometimes even a combination of them in a song. Emotions come mostly from things we have experienced or heard and that have spoken to us and led us to create. What dominates 'Enigma' came from looking at the reality of today. It is obvious that in recent years it has become more difficult for the human species, due to the human species. You see people show aspects that were unknown, you see their behavior, their choices. So all of this has raised a general concern that we are commenting on in our own artistic way and, at the same time, sending our own message. And there's a track on the album that talks about the three stages of human life.“ 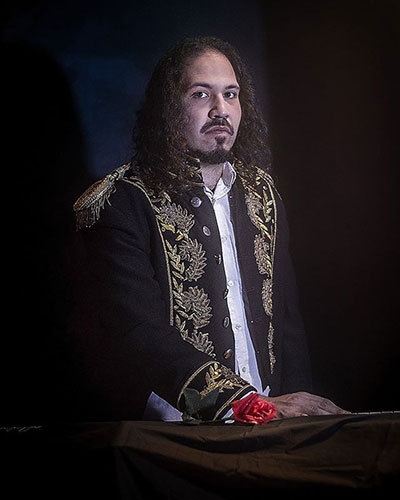 „I wrote the most of the music except the song 'The Storm Inside' which is composed by Giacommo Paradiso. Fiona and Vlassis wrote all the lyrics except the song 'Horizon' in which I wrote them. The arranging process was the biggest part of the creation. We worked all together on the new material for about one year and during this we made a lot of changes for the songs deserving or our expectations.“

„Well, the hardest part was to create this new dimension for our music and take it a step forward. As I told you, we didn't want to create a replica. There was no interest to create something similar to 'Ethereal' or 'Adeline'. Off course if you listen those albums you can find elements that are the same, roots are roots, but the overall idea was to create an album which will take things a step forward, like I said. This means that during the process we went to the songs, listened them again and again, make changes. Doing this for six months it's not an easy thing, but it is worth it!“

„The influences on this album are almost the same they were on the previous. What is actually changed is the structure of the new songs. For example, on 'Adeline', as you hear it, you feel the complexity into it. Of course 'Adeline' is a concept album, it has his own structure. 'Enigma' is very different, combines the same perfect quality and simplicity. The last is something that comes from musical genres that I listened a lot, but now I'm more into them like pop music. Actually pop music was something that we really relied on it to make this album.“

„Very very much and I really love many bands and songs. The last ten years there are a lot of great bands that appeared on the map and doing amazing things. I admire Amaranthe and Delain. I really like their productions and they way that they move with their music.“

Be so kind and tell a bit about the line-up situation and the ‚chemistry' in the band!

„We are a six member band and we're doing really well I can say! We have also two new guys that joined the band few months ago, Spyros Vasilakis on guitars and Jason Ioakeim on bass guitars. Very talented players and amazing bandmates. We know them both before so it was a pleasure for the rest of us to have them in the family. About the chemistry in a band, I think it's hard to have it, if everyone is at the same page. In our case, we are six people, we love music, we like been creative, recording albums, touring. This is how we want to be our lives for the next 30, 40 years and that's what we are fighting for. I think that this makes the connection really and strong and creates chemistry!“