On his 2003 studio album „Ok Nefna Tysvar Ty“ Vratyas Vakyas, the main driving force behind Falkenbach, demonstrated a quieter side, while also keeping faith with the highest demands of Viking Metal fans.

The time has now come for a brand-new album „Heralding - The Fireblade“, a choice collection of marvelous, heathen anthems, also including some older, previously unpublished compositions. This was the context for another audience with Vakyas.

„As far as I can tell, 'Ok Nefna Tysvar Ty' was extremely well received, although I must admit that my judgment in such matters is not very good. I read hardly any magazines and, because their reviews don't interest me much, I don't follow these things any further.“ 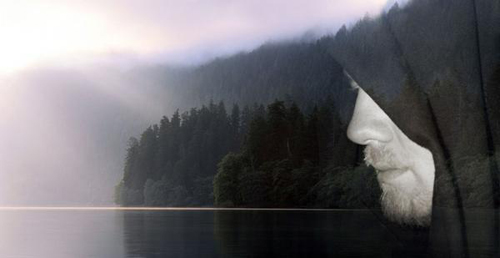 To this extent nothing has changed.

I also talked about how Vratyas feels about the fact that „Heralding - The Fireblade“ was actually intended as Falkenbach's debut album.

„Now that the recording and mixing is finished I can say with hindsight that the decision to breathe new life into this album was absolutely right. At the time, our work in studio went badly wrong and I had no choice but to call a halt at a certain point and to break off the recording because it became clear that it would not be possible to achieve acceptable results. People kept asking me whether I wanted to publish these incomplete recordings and there was obviously still a lot of interest in the old material. That's why it wasn't a difficult decision to completely re-record the album.“ According to himself, Vratyas tried to retain as much of the original as possible and to change as little as possible.

„Of course, on the one hand it will be clear that this is old material, because it differs in many aspects from the last album, containing rawer elements. On the other hand, this new album also has a new sound that differs from the original and that speaks for itself.“

I asked my interviewee to let me in on his innermost thoughts that drive him to create his epic music. He reports:

„I am often asked that question, and I don't have an answer. Doing this is just something that has to be done and I don't recognize myself as the source of what results.“