If an outspoken performer like Kataklysm singer Maurizio Iacono devotes himself to a new band project, then we can certainly expect a whole thing.

The vocalist of the established Canadian Death Metal heavyworkers has always been fond of the warlike and powerful history of ancient Rome, which he began to make musically some time ago.

With Ex Deo, Iacono and musicians offer a very special Monumental Battle Death Metal version of brachial death-lead sounds. It offers a style which is probably the easiest to describe or categorize with Symphonic Death Metal.

Not least through guest appearances by illustrious genre artists such as Karl Sanders of Nile or Nergal of Behemoth, the current debut album „Romulus“ should be guaranteed broad attention. 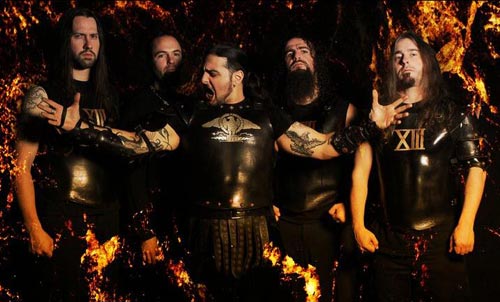 Maurizio, in general, which things on earth influenced you mostly for your new debut album "Romulus"?

„Well, of course I would have to say all things that relate to Ancient Rome, its good to see the influence of Rome still present today! Musically it was just to create a Metal version suitable to the grandeur of Rome in an Epic fashion!“

What's your own objective view about Ex Deo so far? Which differences to the brutal sounds of Kataklysm are waiting for the listeners, beside the might epic structures and melodies?

„Its definitely a journey to listen to this album its something that is special and interesting and not fantasy like because everything happened for real! Musically the melodies a very dark, there’s a symphonic overtone to the music not heard in Kataklysm … they are two different babies.“

Your father, as you said an expert of history in this context, told you surely much about these topic. What exactly ignited your interest in the stories of the old mighty Romans?

„How it relates to may things around us today from governmental structures, over warfare to our modern day calendar, to how some city names still bare Rome’s glory even in America, but most important the quote of Julius Caesar that said ‚The sky is the limit‘ meaning nothing is impossible … fascinating to me the will to live and vision they had.“ 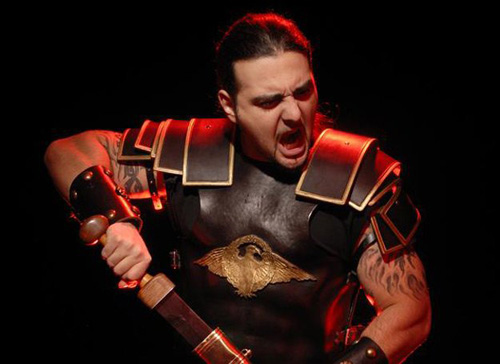 You love epic movies, like „Gladiator“ - would you list a few more movies here, which are part of your inspiration?

And, what's your opinion about movies like „Braveheart“, „The 13th Warrior“ … what do you think about the newer movies, as for example „300“, in which is nearly 50 percent made with computers?

„I love all those movies … I really like old movies like ‚Spartacus‘ or even ‚Julius Caesar’ with Marlon Brando, a movie from the 70s … just like that feel of it my favorite must be the series of ‚Rome’ on HBO was great, but I also like the more modern ‚300‘ approach. I hope it continues and more will be made.“

What do you want to tell the listeners with the lyrical contents of Ex Deo?

„Of course it was impossible to cover all of Rome’s history of 1.000 years on one album, so I took some interesting parts and started with some of the more popular parts to introduce the fans to this... I introduce Julius Caesar, Octavian, Mark Antoni, I touch the subject of Slaves, and also Gladiators and of course the foundation of Rome with Romulus & Remus. If I do more albums I will cover much more ground and go deeper in it.“

What do you think about nowadays genre-bands which do mostly anything (even changing the style of music) just to become and stay popular? 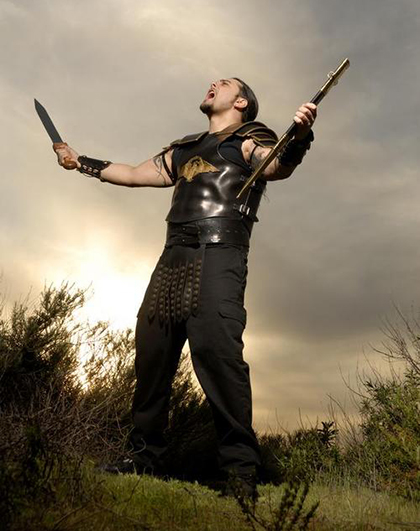 „Well, I think evolution is a good thing and also Important but its not smart to betray who you are … and what you mean to the world, just to stay relevant. I say: good music will always survive!“

What do you think - why so less bands are able to play really good Epic Extreme Metal? Is it a question of broad range of inner views and feelings in the end?

„Its not easy to do, takes a lot of feelings to creating good melodies it comes from the heart and from the soul, so bands that create music just to be trendy to don’t have anything real in it. One thing is for sure: you cannot be fake with Epic Metal because it requires to much to be authentic.“

Which is still the most inner driving force within your creative heart to create such mighty Metal music?

„Number one is passion, feeling and the will to express yourself. I have a lot of determination as person, when I decide the time has come … the time has come and I must do it, thats what happened with Ex Deo … when my heart speaks to my soul the armies get ready for war.“ [laughs]

Will you carry on with Kataklysm as much as before?

„Absolutely, one of the reasons behind why we went forward with Ex Deo is also because we wanted to give Kataklysm some rest. The band has been going strong for the past 10 years with no break. So we shall return with Kataklysm in 2011 with something devastating, we promise. If the world still exist of course.“

Live gigs in 2009 for Ex Deo scheduled? Any plans for a real tour?

„Yes we will tour Europe first with Paganfest in Sept/Oct. and we look very forward to it, should be challenging but great as well, we will see what the future holds for Rome on the road, hehe!“