These Belgian beasts are a well-established institution in the Black Metal area since surprisingly many years. More precise since 1993.

More than two demonic decades of infernal hatred, toxic disgust and burning fervor brought this for the down-at-heel outside world.

While countless Black Metal troups came and went since then, Enthroned still elongate their own Satanic scepter continued up with determined hard hand.

An anniversary: the exceptionally durable Brussels band shows you now with the tenth album strike „Sovereigns“ their huge devotion for their own ideals.

New to hear are rhythm guitarist ZarZax and drummer Menthor, which replaced its predecessor Garghuf. 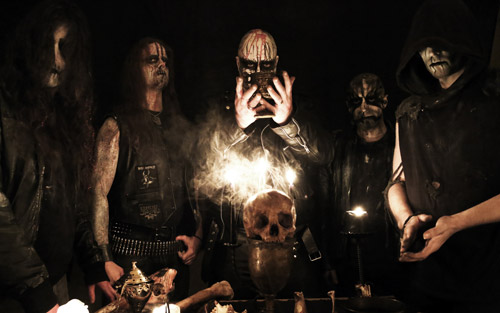 „“Sovereigns” is a more hypnotic, dark and brutal album than “Obsidium” without being too different. You will find some similarities but not too obvious; let’s say “Obsidium” is see from our point of view and “Sovereigns” from “their” point of view. So we wanted to make this aspect of the lyrical theme very present in the music, bringing more ambiance within the guitars and me using a wider range of tones in my vocals to emphase this aspect of giving “the chance to speak their mind” of the beings we always/ mostly talked about.“

Any differences to the previous album release to mention?

„Compared to our last release “Obsidium”, this album shows more variations within its entirety; each songs have their own identity and vibe. You have a brutal song based on sole aggression, a mid tempo song, a more ambiant one, a more experimental track, a traditional Enthroned song in the vein of what can be found on “Towards The Skullthrone Of Satan” our 2nd album etc... Plus as I said the whole album is darker, more intense and the vocals are playing a bigger role throughout the album. Let’s not forget the three guitar lines as well, which is a first time ever in the history of Enthroned.“

What still counts most for you in making demonic arts with Enthroned?

„To speak out what really matters to us, to just be ourselves by approaching the subject. We are conscious that our lyrics are not easy maybe impossible to understand for most people who have no attachment to the Occult and especially to the ones who have no interest in this matter, but it is done consciously as this kind of knowledge or informations are not for everyone but it is what we are as persons and therefore it is the most honest form of expression; to talk about what we are and not how we would like to be perceived by others and just simply for some random people’s entertainment.“ 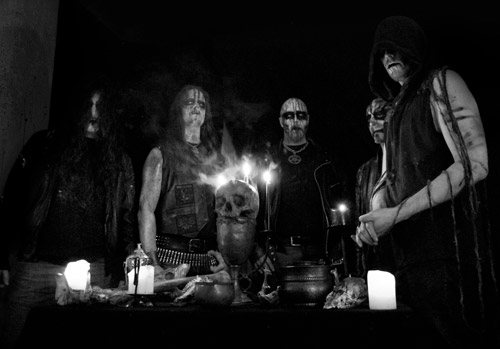 And what is your greatest dream regarding the band?

„I’m living it right now; having members in Enthroned on which I can count, who share the same ideals, visions and goals and who are on the human level brothers, close persons who do not play or got involved for other reasons than the ones this band was created for, touring the world and spreading our message and music to the ones who understands it and get/send energy from it.“

You guys do still have a outspoken passion for a specific chaotic and apocalyptic aura in your songs, isn't?

„Well, not solely, this would be rather boring and let’s be honest it would mean that we are some kind of unstable persons. Chaos and brutality in their core have to be consumed and used when needed else they just become a giant trap which consumes you and your music. It has to be delivered in its full blast when required and kept tamed at the right moment.“

Do you have a personal favorite unto the new creations?

„I do love them all but “Lamp Of Invisible Lights” has something to it. I wanted to do a duet with Aleister Crowley for a while and now it was the right time and possible. [laughs] It was a great experience to do this kind of dialogue with the “Great Beast 666” , like he came back from the grave. But this is just my personal experience with it.“ 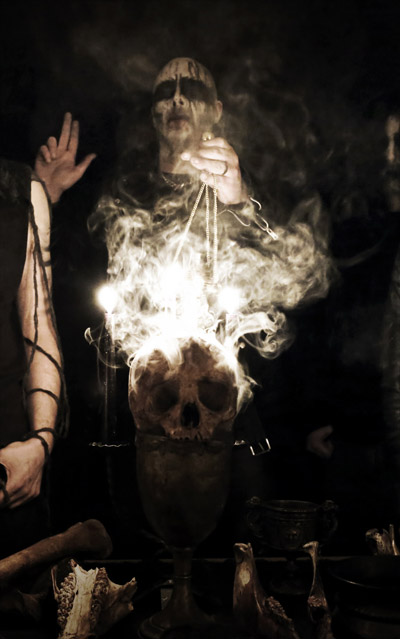 Which intensive or extreme feelings and thoughts have ,controlled‘ your minds within songwriting?

„Excitement and a bit of struggle with myself at some point regarding the lyrics, I never attempted to write lyrics this way and it was pretty “hard”. But in general I’m surprised of how fast this album was composed in an even more spontaneous way than “Obsidium” was.“

„Every single member was involved within the composition process. Everything went really fast and naturally, we took a year and a half touring, playing shows and time for ourselves and then we just met and wrote the album. We knew where we wanted to go with “Sovereigns” and I’m happy to say that we delivered what we had in mind and beyond our expectations.“

Please report about the main content in general of the new lyrics!

„“Sovereigns” is a unique album regarding the lyrical content; if you compare it to our previous releases, we were talking about the Occult in its true form, how things really are, our in real life experiences with Satanism, the occult etc... and what we’ve learn from these, but with “Sovereigns” the pen has been given to these entities, demons, spirits however you personally want to name them, and they give their point of view upon us, their opinion about a specific situation, event, action etc... Some might take it as a more fictional theme but they couldn’t be more wrong; all the informations gathered are from reliable sources and personal experiences once more but of course who am I to try to convince the profane? And this is absolutely not my goal, on the other hand by approaching the lyrics this way it is my sort of tribute to these forces but this is once again a personal thing.“

Which are your special musical, personal and spiritual influences nowadays?

„We are influenced by everything we listen and enjoy may we like it or not, but I try to keep all black/death metal influences away as far as composition is concerned. What we go through as persons carves the patterns of our emotions so therefore has a huge impact on our music, each event that has affected us in our personal life may it be occult or not will automatically have an effect and will be the source for this or that riff, solo, blast etc... Lately I’m listening amongst other things a lot of non metal bands or artists like God Is An Astronaut, Allan Petersson, Lapis Niger, Huun Huur Tu, Wovenhand, Rome etc... and they might have had some influences on me regarding the composition, but then it was not intentionally.“

Personal question: what's your greatest wish at all on these socially so damn rotten globe?

„That humanity would get finally some brain but I think this is just a hopeless dream!“