Belgian elite Black Metal successors Enthroned were formed around 1993 by borderless possessed Metal maniacs Sabathan and Cernunnos after the split of their previous bands Morbid Death and Blaspherion.

In 1996 along with Ancient Rites and Bewitched, they invaded The Netherlands, Belgium, Italy, France, Spain and Portugal. In April 1997 just as time was approaching to start recording the follow-up album, „Towards The Skullthrone Of Satan”, Cernunnos committed unfortunately suicide.

In April 2001, their fourth album-killer, „Armoured Bestial Hell” was released and the Belgian devils were shortly afterwards forced to endure another line-up change. This time, Namroth Blackthorn was the one to be banished from the darkest musical sanctuary and was worthily replaced by Alsvid from the mighty French Black Metal band, Seth. 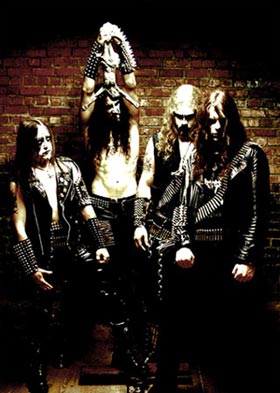 After the release of „Armoured Bestial Hell”, the immense dedicated Belgian horde played many amazing live gigs in Europe and, despite the horrible terrorist attacks, flew across the big pond and spent a month in the USA.

In the younger past Enthroned leaves British Blackend Records and signed to Austrian Napalm Records, where now the new album-feast „Carnage In Worlds Beyond” will be released.

It marks their very best work so far, these hellish piece of a disc truly owns a special evil power. Inevitably attracted by it, I‘ve met their guitarist Nornagest at the wide opened gates of Satan´s realms.

„Our new album is recorded and it kills...” - seems to be the truth! Where has been „Carnage In Worlds Beyond” produced and how was the recording time for the band?

„The album was produced at the Spiderhouse Studio by Harris Johns, we spent the best time of our career there, the mood is so relaxing, and Harris is really the producer we were looking for. It is the first time that we are plenty satisfied with one of our productions at 100 %!”

„The best material since `Towards The Skullthrone Of Satan`” One can agree to this! What was going on within the band, to write such magnificent songs for the new album after a long time again? New strong hope after the leave of Blackend Records?

„Yes, totally! You know when your music is owned by people who do not understand what your message and soul are about it is not easy... Also, we had a lot of line-up problems, like members who did not invest themselves at 200 % in the horde, attitude problems etc... This is not the best way to compose your best material. Everything went fine since we got Nerath Daemon and Alsvid in the band. These two bastards are just like me and Sabathan, pure Satanic Metal alcoholics. Now we have that special osmose in the band that we lost after `Regie Sathanas` or even `Towards The Skullthrone Of Satan`. `Carnage In Worlds Beyond` is the new departure for Enthroned, I can say that the real Enthroned is back!”

How did Enthroned find to the deal with Napalm Records and what do you think about the other bands on their rooster?

„Personally, I don't like much of the bands they got but, you know we did not sign with Napalm Rec. for the bands they have... I like Abigor/ Diabolicum/ Nastrond and Summoning, but not the Goth stuff at all. But until now, Napalm has been excellent to us, everything we asked was given and they are one of the most professional labels around, so I don't think we have to worry.” 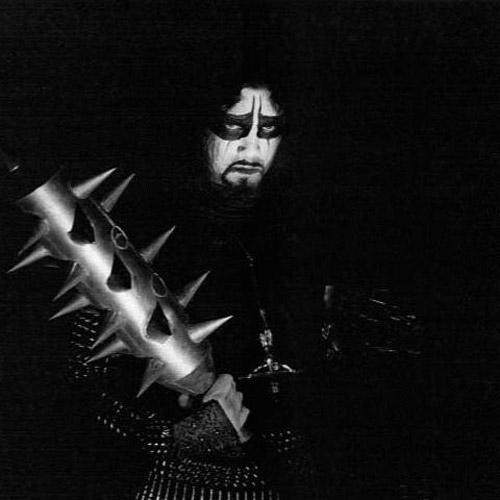 „Enthroned have finally found his ultimate place to be!” What do you expect from this fresh collaboration with the label?

From which city in Belgium do you guys hail? Exists a good Metal scene there?

„We are coming from Namur, there's no real Metal scene in this town. But some good bands are rising up in Belgium like From Beyond, a Thrash Metal band from Luttich (Liege), Emptiness (Nerath Daemon's other band) who plays old school Death Metal in the vein of Incantation, The Beast (my project a la Beherit/ Blasphemy/ Sarcofago), Magellent Dream, who play great Heavy Metal in the vein of Iron Maiden/ Agent Steel, Iconoclasm, Infernal Legion, Hybrid Veisceri, Aborted... these are the best Belgian bands to me.”

Most of all the Belgian Black Metal bands are really good. Which are your faves in the moment?

„If you still consider Ancient Rites as Black Metal, which I don't? Yes, their new album is a lot better than the previous one but I remain a fan from the two first albums. I also love Emptiness, not because Nerath Daemon plays in it but simply because it kills!” 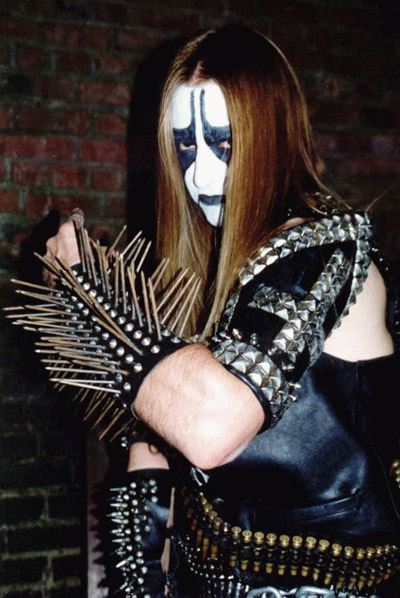 Which is the current line-up of Enthroned?

„The actual line-up and the best to me is: Sabathan (bass/ lead vocals), Nornagest (me – guitars/vocals), Nerath Daemon (guitars) and Alsvid (drums).”

Which member left Enthroned and why?

„Last member we kicked out was Namroth Blackthorn, because he had an attitude problem and we do not really accept rock stars in Enthroned. We are perhaps sons of bitches when it comes to the business side of things but we are before all Metalheads at Satan's service.”

Luckily the true core of Enthroned shows once more upright and honest attitude with „Carnage In Worlds Beyond”. Are you still in contact with Namroth Blackthorn?

„No. He wimped out and is listening to Pop Top 50 music now.”

Do you see a longer permanence in the nowadays line-up of Enthroned?

„I hope so, Enthroned has never been so solid until now. We are a unity, you can feel it in the new album. We all want to go in the same direction and we have the same ideas. I think we have here what we can call a band. And it was not like that in Enthroned since 1996, when we were a trio with me, Sabathan and Cernunnos.”

„The meaning of `Enthroned` is for us the enthronisation of Satanas upon this world. His throne were he reigns. We are his mouth and fist. Our instruments are his chants and our lyrics his messages, spoken through our own throats.”

Who crafted the great Enthroned logo once – guess, Szpajdel?

Why did you stop the collaboration with the talented Kris Verwimp after the second album? To my mind his both artworks for Enthroned‘s first two albums were tremendous! 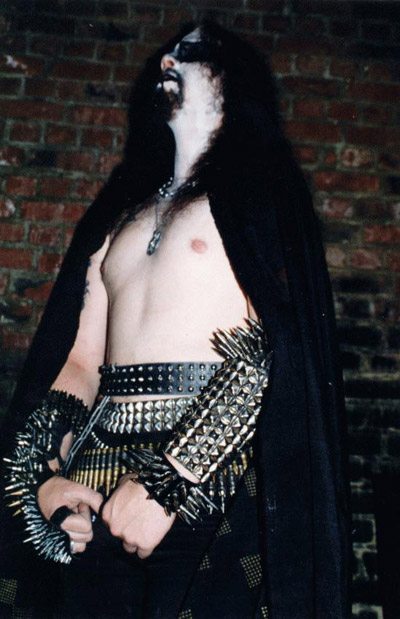 „We stopped to work with Kris, because he's a friend of us and we did not want him to get money problems: he was paid three years too late for the artwork of `Towards The Skullthrone Of Satan`. Then after we ask Rok from Sad-X to do a cover for us but it was a bit too much `Voivod` for Enthroned. And finally we decided, as me and Nerath made some artistic school, to do our artworks ourselves. so, `Carnage In Worlds Beyond` will be the 1st Enthroned album with our own artwork – and we think that we going to work like that all the time, now. But still, I think Kris Verwimp is a great painter, one of the best in his style!”

Who made the frontcover art for „Carnage In Worlds Beyond“?

„Me and Nerath Daemon, we worked on it together. As well as the complete lay-out of the new album.”

Which meaning does have the new frontcover?

„The skulls represent death that is waiting to take you within the infernal carnage and the goatskull gate, is the passage to another world. When you cross this gate, and push `play`, the carnage starts!! It is our view of one of the different worlds.”

Please explain the main (lyrical) meaning of the new songs a bit!

„As always, pure Satanism, our lyrics always got a link with Satan, near or far. In this album, you can find Satan through the ages like in 1666 in Versailles (France), in the mind of the man walking behind you, in your pervertions and also phantasms etc... But I cannot tell you the whole thing here; people have to discover these lyrics by themselves and let their imagination flow... and they also have to... think...”

Who has composed the new songs mainly?

„Mostly me and Nerath Daemon but also Sabathan. It was a real band-work here. I had to compose all the three last albums by myself, because the other members did not like the way Sabathan was composing and because they were too lazy perhaps. On `Armoured Bestial Hell` Namroth Blackthorn took part in the writing process but his drum parts fucked up the whole album, so... I'm very glad that we found some members who compose like me.”

Who wrote the new lyrics in general? 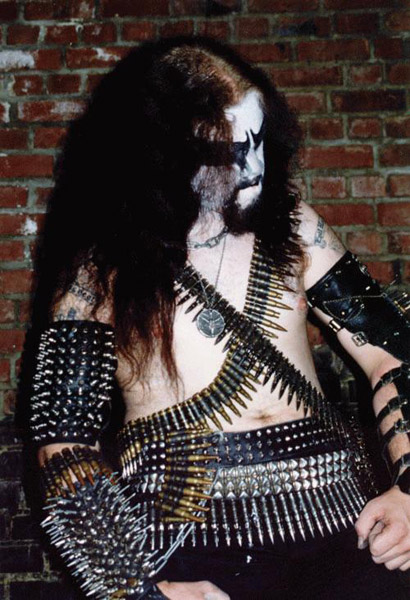 Many appreciate the optic style of Enthroned! While others begun with getting more `seriously`, Enthroned continued wearing tons of spikes and leather, and also corpse-paint! Why you are guys strong enough, to walk the stylish path with such immense pride?

„Because that's what we are. We are satanic Metallers to the core and nothing will make us change. We started with spikes, leather and hell. We will die with our spikes, studs, denims and fucking paint. May people like it or not, we are Enthroned and we will always stay like we are!”

What do you think, will going on with the worldwide power of Christianity in the future?

Countless sceptics questioning themselves, what will be with these global economic organized sect in ten, 20, 50 and in 100 or even 1.000 years?

„You are true! Christianity is just a matter of time. We have to bury the lambs of Christ once and for all!”

Any upcoming live gigs planned in the moment?

„Yes, we have the Skeleton Bash Festival in Austria next week, then we are doing our release party for `Carnage In Worlds Beyond` in London on the 21st September 2002, and on the 5th October in Belgium between Gent and Antwerp. For more info, check our web page (www.enthroned.de). Cheers mate! Rise up the blackened Metal flag!”

Worth the mention plans for the future?

„We hope to release a special album for our ten years of pestilence, next year with rare and unreleased material and we hope to go on the roads again soon!”