Since 1997, this idiosyncratic Italians play their vanguard musical mischief. And the upper morbid mixture of Gothic, Progressive, Electro and Industrial Metal of the bizarrely clad quintet could not be more country-specific.

Theatrical, philosophical and esoteric proceed Ensoph. Various echoes of similar dark artists like Theatres Des Vampires are not to be dismissed out of hand.

Hey Xenos, where exactly do you come from?

„We come from Venice and Padua interland, in Italy. It’s a really foggy plan, cold in winter and choking wet in summer. You can call it country, but it’s a land full of contraddictions. Between great expanses of fields, just a step before the sea, you can find Marghera’s area, one of the most intense concentration of industrialization and pollution of the whole Europe.” 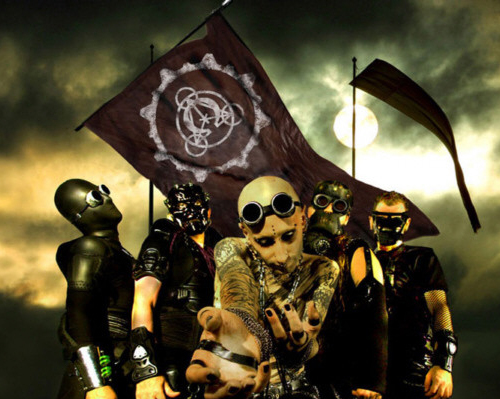 Please describe yourself and your character!

„I’m 28 years old. I make a really reserved life. I spent the main part of my free time between the books I love (I’m very interested in esotericism, traditional culture, theology and contemporary philosophy), writing, and playing with my bands (I play also percussions in a medieval pipes project, in a Black Metal band and I’m active in the industrial field). I’ve got a close number of friends who are my family, and a girlfriend who share with me every experience, even if living with my is not simple... If I look to my life, I think I’m a very lucky person.”

In which life-philosophies do you believing?

„Xenos, my pseudonym in Ensoph, express in the best way my relation with the world in wich I live. I’m simply a stranger in this occidental mess. My attitude could be draw near to the ones described in “Der Waldgänger” of Ernst Jünger or “Cavalcare la tigre” of Julius Evola. Another ethical guide that I think is related to my point of view is “Sun And Steel” of Yukio Mishima, a book that plays a really important role in my formation. About relationship with other persons, I deeply believe in loyalty and into the respect of individual differences.”

Which are your musical goals with Ensoph?

„Finding the key to introduce someone in my own world and thoughts. Making people thinking to something that is important, from my point of view, to think. Giving an artistic expression to my visions, obsessions and regrets.” 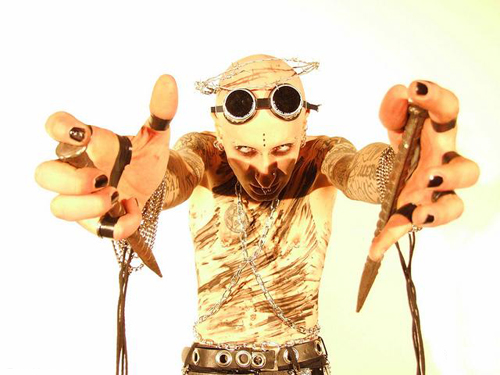 Which emotions do you want to express with the band?

„We can’t make plans about it: what we want from our music is simply derisory. Ensoph music is a kaleidoscope of emotions. You can find in it passion, hate, depression, energy, desperation... All of them are good, because we are alive, and human being’s feelings are impossible to be enclosed in a pre-determinated range. Our music is an expression of freedom, and it’s impossible to be controlled.”

Please bring the thematic conception and the artistic ambitions of Ensoph a bit closer!

„Ensoph sound is the melting point of five different persons, that have really different musical and cultural backgrounds. We try to make music in the most genuine sense of this expression: leaving behind all the concepts of borders and labels. We think that if there is a reason to play extreme and Gothic Metal nowadays, it is as to express an attitude of nonconformism, something that is often forget in the present musical scene, not only on the MTV generation. Music is an act of freedom, and must return it. This run also for lyrics: the topics of our concept, the way in wich we manipulate symbols excerpt from the tradition of religions is the attempt to reaching new forms of comunication and languages, new way of expression, out from every kind of orthodoxy e pre-determinated path.”

From where do you get the ideas for these ludicrously costumes? 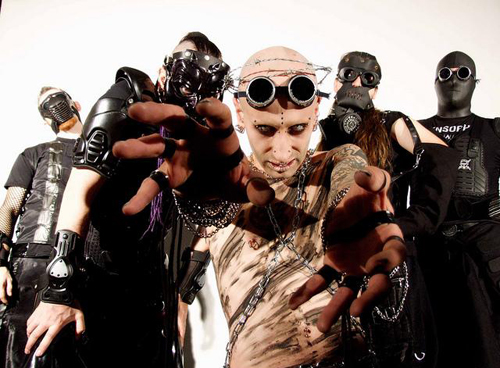 „They are just an aesthetical traslation of our music. We are fanatics of “self-made-dress-customization”, and we are always searching for new solutions, so our image can be considered as a constant work in progress. We love the idea of taking distance from our daily identity when playing, and masks are the best way.”

In which clothes do you run through daily live?

„I’m a transformist. You can find me as a juggler or a jester performing in the square of your city, or dressed as a cyber-freak in Ensoph, or maybe in the university library, where, if it’s not for my “one metre” hairs, I could be confused with a common student... All my identities are one side of my existance: Ensoph are part of my daily live, so when you see a photo of my band, you see exactly what I am.”

In which mood do you have the best creativeness?

„No particular mood is needed: every moment can be the right one. We write music every time we feel to make it.”

Please tell some influences – musical and lyrical – for your songs!

„Our main influences are Sopor Aeternus, The Kovenant, Das Ich, Tiamat, Moonspell and Devil Doll. Everyone has really different listenings, but this bands are the common points of our musical background. About lyrics, our main sources of inspiration are the works of Jünger, Cioran, Mishima, Spengler, Zolla, Guenon, Evola and all the esoterical traditionalism, like Shurè for example. Also Scholem, Eliade, Girard, Altizer and the 70’ radical theology are important influences.” 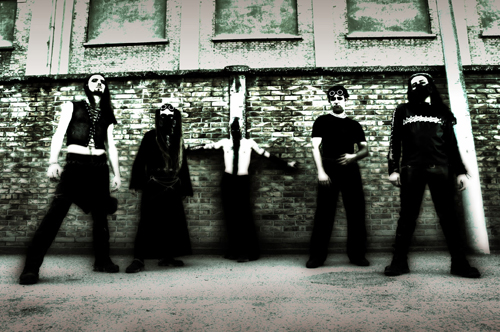 Please describe the lyrical conception of the new album!

„Eschaton, in greek, the language of classical philosopy, but also of the gnoctic-apocalyptic movements of first five centuries, means “end”. Knowing this, I think that “Project X-Katon” becomes a really explicit title. In PXK all lyrics deal with the concept of “End” (end of history, time, faith, creation, etc.) under different points of view. For example “Leaving no trace behind...” - third part of the Russian Trilogy and one of the best tracks of the album – talk about the tales of The Great Inquisitor, alter ego of Ivan Karamazov, main protagonist of the greatest work of Fëdor Dostoevskij: “The Karamazov Brothers”, in wich the writers describe the failure of God’s plan of redemption. Here the end is express by one of the most extreme example of nihilism, and stands for the definitive end of all kind of faith.”

Please name a few of your current favourite bands!

Have you played many concerts with Ensoph lately? 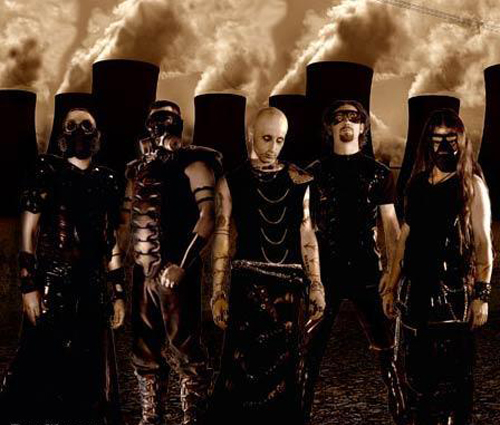 „In the last five years we have done more than 100 live gigs, in Italy and Europe. We have play with bands like Arcturus, Katatonia, Novembre, Death SS, Wednesday 13, Killing Miranda, Cinema Strange, Red Harvest, 1349, Theatres des Vampires. Actually we have planned some really important gigs to promote “Project X-katon”, one as opening act of Thetre Of Tragedy in Italy, and also as supporter of the new italian tour of Death SS. In late spring we will be in Germany for the Wave Gothic Treffen.”

„For the next summer is planned (always on Cruz Del Sur Music) a new experimental album working exclusively in the electronic/experimental field, called "The Hourglass Ordalia", with a lot of important collaborations from some cult experimental bands as Monumentum, Canaan, Ain Soph, Foresta Di Ferro, Void Of Silence, Bad Sector, Argine, Thee Maldoror Kollective. It will be an experimentation in the most avangarde side of our sound, something different from our prevoious work, but, of course, something that will sound terribly Ensoph...”