For four years the fans had to wait for their new opus, after the Gothic Doom Metal top-class actors in 2011 with „A Rose For The Apocalypse“ caused for all sorts of gloomy-reveling raptures. In fact, the new album „Sovran“ makes the tormenting waiting almost forgotten.

Old Paradise Lost while their most penetrating and melodic times sincerely salute from the crypt. Connoisseurs know, what this means. A lot has happened since „A Rose For The Apocalypse“ in the Swedish formation, which was founded in 1994 in Säffle. 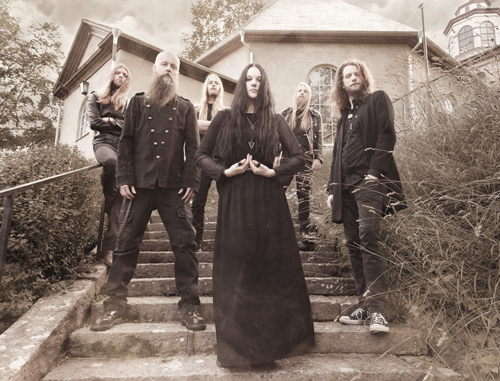 The most striking fact is surely the departure of the former, long-time singer Lisa Johansson, who left Draconian after „A Rose For The Apocalypse“.

Since Johansson, as a voice and a female figurehead, was a fixed point in the universe of the ensemble from the beginning, it was far from easy for the remaining to make a worthy substitute.

I speak with guitarist and maincomposer Johan Ericsson.

4 years album pause, the longest at Draconian to date - why?

„Yes, it all had to do with Lisa leaving the band in 2011 and we had to search for a vocalist for some time. We had some auditions and finally we find Heike. Then followed two years of fighting for her visa to stay in Sweden.“

How do you feel now, after having finished these new collection of special Gothic Doom Metal songs finally?

„It feels very much like a big stone is lifted from the chest. We feel very proud and it was worth the wait in a way. It all came along naturally and the songs had time to grow and mature cause of the long pause. It's great to have the machinery rolling again.“

For what musical ideal does stand the new record?

„It's in some ways a step back to the roots and sound of our earlier days but still looking forward. I've written the songs pretty much as I did back in the day but maintaining the structure that I have in my songwriting today. The tone of the album is also a bit darker I think.“

Why Lisa Johansson did left the band after having sung on whole 5 albums? 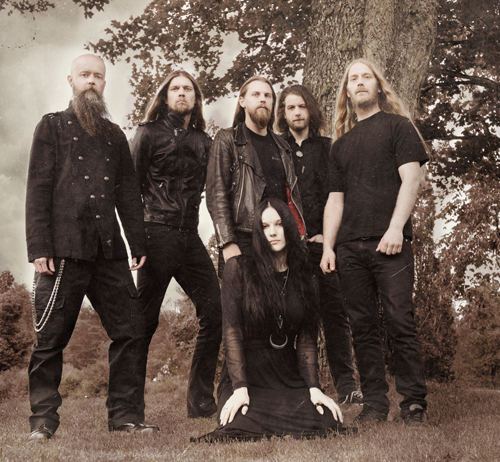 „She just had a baby at that time meanwhile she ran her own company. She told us she had to focus on her private life and that her heart wasn't in it anymore.“

On which way Heike made it into Draconian and why did you guys chose her?

„When Lisa left we held an audition through the internet to find her replacement. A lot of good singers tried to fill the space but Heike was the one we all felt was the right choice. She was really committed as well and sold her car to get from South Africa to Sweden and audition further with us. Vocal wise she have a lot more nerve and emotion to her singing and that was key for us.“

The vocals of Heike with all her devotion and sensitive power fitting simply perfect into the material in each facet.

How did you guys bring her to this highly emotional and touching level?

„The emotion she puts in to the songs are just natural for her. It's the way she sings to put it simply. The collaboration has worked really good since day one. She comes up with a lot of good ideas and is interested in every aspect of the songs. Although I had to think a bit different when writing parts for Heike compared to Lisa. It felt really fresh and exiting to have a new voice to play around with.“

The new album sounds complete authentic, even in the most tragic and longing sequences; seems, you guys got together anew a perfect line-up. Please tell the most important things about!

„Yes the line-up we have today is the strongest in the history of Draconian. Authenticity is important for me and I feel it shows in the album. I actually enjoy listening to the album myself, I usually don't so I guess that's a step in the right direction, haha.“

After all these years, what counts most for you in making music with Draconian - to get deep into visions of some kind of dark romanticism? 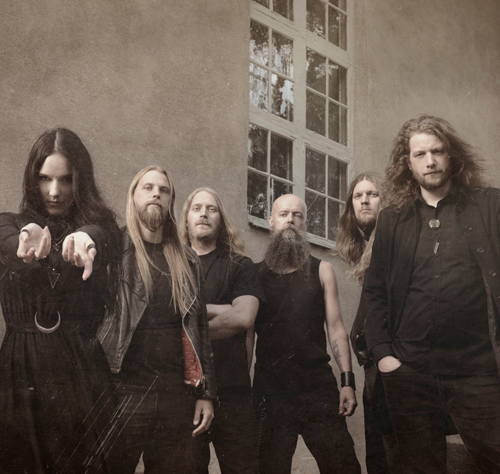 „It's all about channeling what you feel into the songs. And that's the most important thing. It's really like going to the shrink or something. Getting it out so to speak. As I only write music I can only speak for myself and not for Anders who's in charge of the lyrics. Anders I think usually have some kind of vision about what the theme of the lyrics will have.“

Please describe the main musical character of „Sovran“ with your very own words!

„I wrote the music and Anders and Heike the lyrics.“

How long did last the songwriting for the new release in total?

„The main part of the album actually came about quite fast. I had some songs I struggled with for a while but in all it went smooth. I'm guessing a couple of months.“

What’s your very own personal view about the ‚artistic spirit‘ of „Sovran“?

„I feel we all did our best and I'm happy with everyones contribution. And mixer Jens Bogren at Fascination Street did a splendid job as usual transferring our stuff into a great sounding record. I'm very proud of this record and will carry it with me for a long time.“

Are there noteworthy small differences to the previous album(s), which are waiting now to the curious listeners?

„There aren't that many differences I think besides Heike‘s voice. It really feels like a solid Draconian album and why change when we found our sound and people like it. We try not to be repetetive and Anders worked really hard on lyrics this time trying to bring something new to the table. It's all new but the hardcore Draconian fan will recognize the sound.“

Are special musical influences to mention which led more or lesser to the new songs? 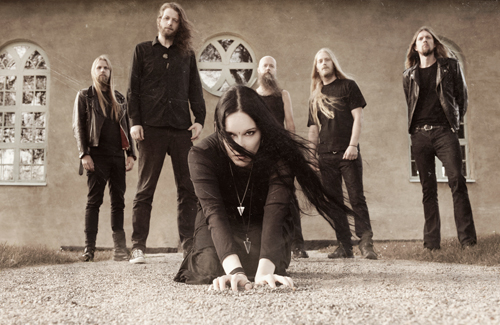 „As I mentioned, it just comes from within so the main influence is what I'm feeling at the time I'm writing. Of course one will have musical influences as well but I think they are mainly the same as 20 years ago.“

What is behind the album title „Sovran“ and who had the idea for it?

„Anders came about the idea. It's a old spelling of Sovereign. We are our own ruler and king simply.“

Be so kind and tell a bit about the lyrical core of „Sovran“!

„There's not a main content really. It's a universal album in every aspect.“

Which one(s) of the new lyrics goes most deep into your heart and soul?

„Probably "Stellar Tombs". I really like the feeling the lyrics complements the music.“

Live on stage with Heike - works as same good as on the album I guess?!

„Yes, of course. Heike is a natural on stage and we feel like a family up there.“