Who got the 2003 appeared debut album of these Sweden into the fingers, was pulled as a fan of gloomy Gothic Doom Metal quickly into the ban of Draconian.

Because with the grandiose „Where Lovers Mourn“ the septet touched its listeners persistently. The effective formulation of their heavily plodding monumental sounds reads like a dark conglomeration of negative emotions.

Incurable melancholy, immense desolation and boundless despair are brought together from the in every respect profound acting septet again to a bombastic wealth of doomsday sounds.

Even with the new drama Manifesto „Arcane Rain Fell“, a further quality work, Draconian may confidently among the most emotionally authentic and best representatives of their stylistic orbit. From the latter occurs singer Anders Jacobsson out for me. 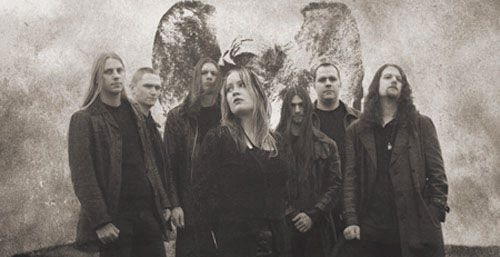 „I am fine, thank you. The band is also fine, and we are currently rehearsing some old and new material.“

Why is the old logo not on the frontcover?

„It did not fit on the cover, sad to say. It looked cheap and messy. But I think it looks really nice as it is now. The old logo is still our real logo, and we intend to use it in the future.“

How would you describe your new music for fully new listeners?

„Well, in comparison to „Where Lovers Mourn” this new album of ours is darker and more atmospheric. It’s more like ‘back to the roots’ and true to the doom-sound. Heavy, epic and obscure is one way to describe the songs on the new album. „The Apostasy Canticle” on the new album is perhaps the darkest song we’ve ever made so far.”

„Arcane Rain Fell” is much more sad music than on the album before – which are the reasons?

„Yes, this album is sadder and bitterer. I don’t know. It’s just how the material turned out in the end. We concentrated on to make the sound more doomy and heavy… more cold and epic, therefore it got sadder. That is good, cause the sadder the music gets, the better. I think there is a great serene power in sorrowful atmospheres. I talks to my soul and make me realize the truth in most things.“

Which are your expectations for the release of the new album?

„I really hope this album will push us forward in order to be a more professional band in general. I hope it will get us a deal with a good booking agency and that people buy this album, and help us do even better in the future. Since this album is a little different from „Where Lovers Mourn” I hope they will love also this album. Draconian is very anxious to get on the road this year 2005.“

„The title of the album is more poetic than philosophical in a spiritual aspect, but it can of course be used as that as well. The word “arcane” means something esoteric and abstract… an enigma. And the rain that falls is like tears… like the dying of nature in autumn. It’s poetic and symbolical for the anguish and grief of the dark angels.“

Who in the band has composed all these new dramatic doom melodies?

„Out guitarist Johan Ericson did. He has made all the music on this album. He is a very talented and productive guy, who really knows this music.“

I like the choirs in your songs very much – how did they develop?

„The choirs are creations of Andreas, our keyboard player. He has a lot of sampled voices and stuff to use in the songs. It really sounds great and very powerful. It brings forth the essence behind the concept very tastefully.“

„On this album it’s the rebellion and fall of Lucifer which is the topic. It’s more or less a concept album about the emotional world of the dark angels, and the bitterness they feel towards God, light and humanity. To me it’s a very important subject. I can relate to it with all my soul. Otherwise I usually write lyrics about sorrow, solitude, love, hate, abandonment and sometimes occult stuff. I also have written some misanthropic lyrics like „It Grieves My Heart” which deal and question the shallowness and corruption of mankind.” 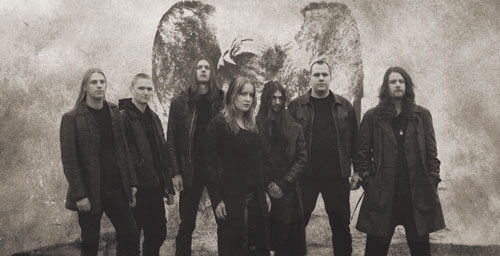 Which other (Doom) Metal acts you like and which are your favorites ?

„I like a lot of doom bands, but My Dying Bride, Anathema, Mourning Beloveth, Saturnus, Shape Of Despair, While Heaven Wept, Void Of Silence, Esoteric, Solitude Aeturnus, Morgion, Evoken and Novembers Doom are bands I really love listening to.”

„As much as we can, as long the conditions are somehow professional. Playing live is a great experience and I love doing it. So hopefully there will be a lot of gigs this year.“

Main plans for the nearer future?

„Our only plans are to perform live as much as we can to promote the album. We also have some concentration on new material… and some covers. We try to stay as productive as we can.“

„No, not at the moment. Nothing is scheduled.“