Nevada´s Metal scene was stagnant when four friends joined forces as December in late 1994, but it is thriving today thanks mainly to this band´s unrelenting toil. Years of headlining clubs and basements, as well as opening for heavyweights like Neurosis, Dillinger Escape Plan, Drowningman, V.O.D., and Today Is The Day, have honed December´s inhuman sound to razor sharpness.

Zane released a remastered version of „Praying, Hoping, Nothing” with additional tracks and artwork by the prolific artist Travis Smith (Opeth, Death, Nevermore) in 2000. Also in 2000, Ian Glasper´s Blackfish Records released a split CD with Metalcore band Unite for the European market. 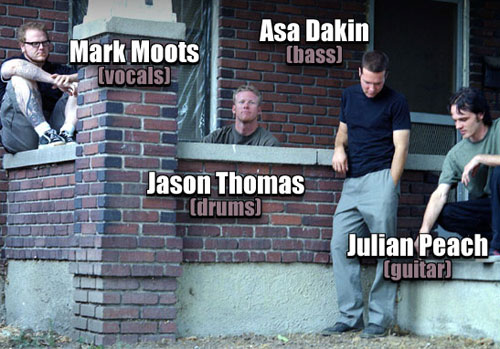 In January 2001, after touring the West Coast with such luminaries as Crowbar, S.O.D., Skinlab, and Hateplow, December recorded a demo of four new songs.

„The Lament Configuration”, their crushing debut album for Earache Records, is out now.

Here's what guitarist Julian Peach has to say about it.

„December was founded in 1995. The band has changed a few members over the last 7 years. Mark Moots (singer), Jason Thomas(drums) are original members. I joined the band 6 years ago and Asa Dakin (bass) is working on his 2nd year. We are from Reno, Nevada. Although we have put out a few records, this will be the first record with good distribution on a large label.”

How would you describe the members of the band?

„We are all very different, but we have been together for so long that we also share a lot of the same mannerisms. Just like any group of good friends. It would be to hard to summarize each person in a few words.”

„The Lament Configuration” received lots of good critics to date:

„We have been getting nothing but good press. The record, so far, has been received very well. We are very excited that there are people out there that are into what we are doing. The few fans that have heard the record have told us that they think its the best stuff we´ve done.”

Is a tour planned to the release of the album?

„Absolutely, although there are no 100 % solid plans at the moment.”

Where could you guys be on tour?

„We should be going out in March here in the States. Then hopefully make it over the Atlantic in the very near future.”

In which country would you prefer to tour?

„Although, we are excited to tour here in the States, it would be great to tour in other countries just because we would love to get out and see the world.”

„Honestly, we don´t have any stage effects or pyrotechnics or anything like that. When you go to a December show, you will see four guys giving it all that they can. That seems more honest to me. We arent trying to be anyone else, its always just been about making music and having fun.” 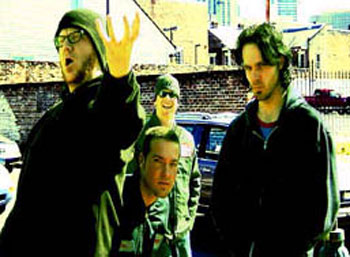 What does mean the title of the new album for you?

„The title comes from the movie `Hellraiser`. `The Lament Configuration` is the proper name for the puzzle box that opens the gates to hell. When you listen to the record at times it might sound like Hell has been unleashed, so it seemed appropriate.”

Is there a basic concept or theme on „The Lament Configuration”?

„There isn´t one. Its just a collection of 10 songs that we came up with in our studio.”

Where was the album produced?

„The album was recorded in Vancouver, Canada. We had the pleasure of working with Devin Townsend as our producer. The record took around 8 days to record. It was recorded and mixed in 4 separate studios. The songs were all written in the last 18 months. It usually takes us a month or two (sometimes longer) to finalize a song. Although, we work on several at a time.”

Who has written most of the tracks of the new album?

„Mark and I write most of the parts with Asa also contributing several parts for this album. Jason, always has something to do with every song, when he adds his drum parts the music always takes on a new form. The arrangement is always done together.”

Who did the lyrics?

„Mark writes all of the lyrics.”

What is your own designation for the music of the band?

„I suppose that we are best described as an extreme Metal band. We have never been a band that is about pushing our views on anyone else. We have our own style and our own sound, but there is no hidden agenda within our music. Each song has lyrics but not necessarily a meaning. Most of the lyrics are used phonetically, they just had the right sound and they fit within the structure of the part. I suppose our singer might have written some of them with a particular issue in mind. However, it was for him and he would be the first to tell you that he hopes that you get something out of it without him telling you what it should be. That way it might mean one thing to you but something else to someone else.”

Hopes in the new album?

„I hope that people can get into it. Hopefully it will do well enough that we can continue to make records and tour the world. That´s all any of us could ask for.”

We are at the end of the questions, something special to say to the fans?

„The hardest part of any interview is always the last question. What would you say to your fans? I am always surprised when people come up to me and tell me that they are fans of the band. I appreciate it so much. Its hard for me to believe that the music that we make, for ourselves, in our little rehearsal studio in Reno, Nevada reaches fans all over the world. The only thing that truly comes to mind is, thank you, for listening and all of the support, stay Metal…! Thanks Markus and Metalmessage, we look forward to playing for you and your readers!”