When infernal blazing passions for melodic aspects and absolute surrender to Extreme Metal collide with pronounced play-technical skills, then only powerful can arise.

And then, just dangerous destructive whirlwind sound fills the distorted face of the world like that of these American killer boys. But Dark Sermon have much more. The multiple originality of this frenzied and furious, fierce violence-bunch is, in fact, record-breaking.

The five-headed executive group from Tampa, Florida, was actually lifted from the poisonous baptismal pool just last year! The latter is difficult to grasp when you are exposed to the fresh debut album „In Tongues“. I talk to vocalist Johnny Crowder.

„We are very busy! Which is a good thing.“ 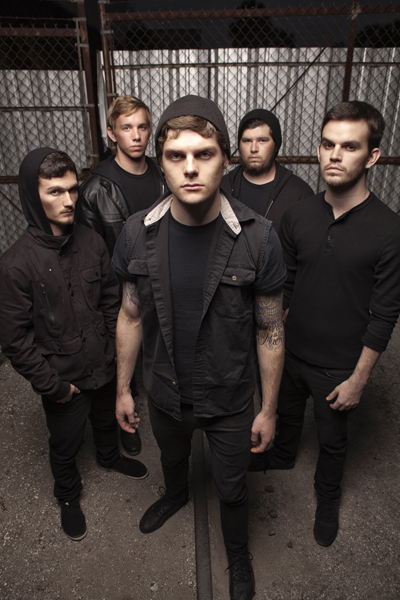 „We wanted to maintain a sense of heaviness while still experimenting with variations in style, sound, and speed. I think we ended up cranking out a very diverse and listenable record.“

„You've reached it to create your very own style and sound in a wide manner, too. How did it come about?

„It took us a while to get where we are now. We didn’t start off playing in this style, but it was a pretty steady progression over the last four years that led us here. I think that’s how any band is, though. We needed to come into our own.“

Which noteworthy differences to the thousands of global Death Metal acts out there are waiting now for the listener?

„I think one of the selling points of the record is that it doesn’t only sound different from other albums that are out on shelves right now; each song differs from the rest of the songs on the record. We tried to combine our various musical backgrounds to create somewhat of a melting pot of diversity. There is definitely a song for every type of listener.“

Is it allowed to ask you about special musical influences for the highly varied song-monsters of Dark Sermon?

„We actually draw a lot of influence from overseas bands like Behemoth and Gojira. A few of the American bands that have impacted us are Job For A Cowboy and The Black Dahlia Murder.“

Sounds on the new album, that you guys are extremely angry about these world. Isn't it so?

„There is definitely a great deal of aggression. But it’s not just aimed at the world, it’s at everything in existence; myself included. You don’t need a magnifying glass to uncover countless flaws in the human race; you need a mirror.“

What is behind the title „In Tongues“? Please tell about the main lyrical content of the new release!

„Our lyrics mainly focus around the concept of duality: the battle between good and evil. The album title is derived from the last song by the same name, which traces a man’s internal struggle between his own voice and those in his head. I cover a lot of other topics on the new record, but among them are suicide, demonic possession, hopelessness, mental illness, misanthropy, cynicism, and vengeance.“

How long was the complete songwriting for „In Tongues“?

„We spent the better part of two years writing this album, and I think the time and effort we put into it shows. We put our noses to the grindstone and didn’t look up until it was complete.“

What is behind the frontcover artwork of the new longplayer?

„The idea was taken from track 5, ‘Cursed’. If I may quote, the refrain reads, “the more I struggle, the deeper I sink into this sea of writhing blackness. Their putrid limbs slither around me, I am entangled in their wretched grip.” A few men (my different selves) are ensnared in the grip of a sea of snakes. They reach out in vain for a cold, stone pillar, which offers no salvation.“

Some own words to the metal followers out there?

„Thank you for reading, friends. Keep an eye out for us, we’re coming to see you soon!“