„Name it Black Metal or evil Rock – it doesn´t matter to me”, announces drum-tormentor Fenriz in all composure with respect to the newest publication, a trickily CD-Single with four tracks, the very first that there was ever of Darkthrone.

The unwavering purists among the followers of the Norwegian genre forerunners shuddering at such words, and they have up-to-date also all reason in addition.

That strings-scrubber and singer Ted Skjellum, better known as Nocturno Culto as well as drummer Glyve Nagel alias Fenriz itself already for some time shear a damp dirt around the concerns of the Black Metal scene, should be known extensively.

Recently they showed up with conflicting song-material in extremely extent, that all seems beeing too late – and therein seeming the strange Punk- and Motörhead-cross-references to be yet the most tolerably. Less beneficial are behaving some crustcore-loans, which aren‘t possible to ignore. Fenriz however shows himself regardless about this.

Hey Fenriz, how do you doing at the moment?

„I have very short time to do this interview because I am a working man since, I was a kid and I am also a cross-country skiier, so I have very limited time. Other than that I am happy as a pig in shit.” 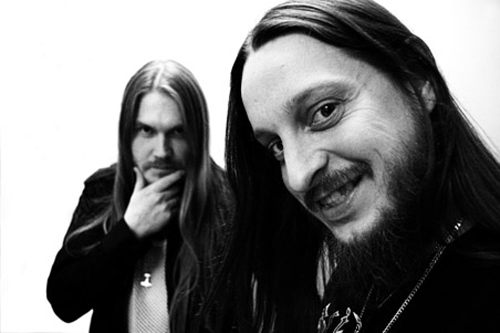 How is the chemistry in Darkthrone currently? I guess, nothing´s changed...

„Nothing, yeah. Perhaps even more respect than ever between Ted and me – if that is at all possible.”

How do you feel, when you think about the new label-situation? Does it feel somehow like coming home?

„Yeah, it does, though it's probably all because of Ted's formidable diplomatic powers – and Peaceville´s.”

Why did you choose to get back to Peaceville?

„I see it as pizza and burgers; one gets tired of just eating one of the food types after a while, and now we changed back to pizza again!”

What is to tell in general about the new Single-CD? Why this time has been a single released? Do you fear in any way the surely upcoming „sell-out”-choirs of the everlasting nostalgic die-hard-fans?

„It is more like an EP really. I don't know why we should do this now and I don't wanna know. But when Ted told me, I thought we should kick some ass. As usual. We are the die-hard´s here. I don't think that is very hard to spot.” 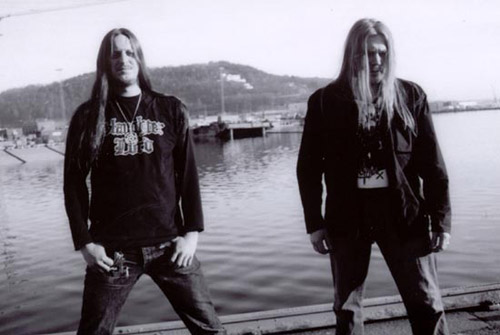 „Absolutely!!! "Scene". I have to laugh. Take a trip with us back to the real scene.”

„High On Cold War” with Grutle from Enslaved, who did some guest-vocals – who had the idea for this? How ran the collaboration with the good Grutle?

„I think it was Ted again, but I was digging the idea at once. I have liked Enslaved a lot since the very beginning, and we also have the same humour and nature interests. I am very proud of that song; High On Cold War!.”

„Love In A Void”, the coversong of Siouxie And The Banshees – why this one has been chosen to cover it?

„I chose it – because it bores me to death with obvious cover songs. Also it was an easy song to do a kick ass necro cover of.”

Which other old Punk acts beside Siouxie And The Banshees do you like?

„I am into The Sonics from around 1964, then New York Dolls early 70s, The Dictators ´75 album and then Ramones. It's not my job to like Sex Pistols. I like hundreds of others but these are a guide to where it all started.” 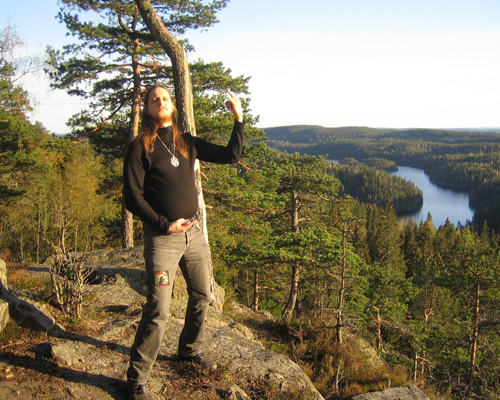 By the way: to which bands do you listening to quiet often nowadays?

„I listen to music at least ten hours a day, so it's too many too mention of course. Lately it's been a lot of Nasty Savage and Cirith Ungol. And Angel from the 70s, and Gun from late 60s.”

„Graveyard Slut” – why this track has been chosen for the single? Your opinion about the song itself? Which reasons led to your vocalizing?

„It is chosen because we needed a song with something special for the single, and that is that Ted does the EP vocals and I do them on the album. I sing several songs, and sometimes Ted decides to do the vocals. It's how we will work on the new album, too.”

The new frontcover art of the single, who did it? What is to tell about? Your own opinion about it?

„I usually don't care about the visual side of things, but this time I wanted that art for the album. Ted had something else in mind, though. It's Eric Masicotte´s work and very genious and primitive with a twist.”

Please tell the readers a bit more detailed about the new creations of Darkthrone for the upcoming album!

„Huh? I always try not to distort the music before it hits the ears of the listeners. That's why all this shit chat is only damaging to me. I hope this is possible to understand.” 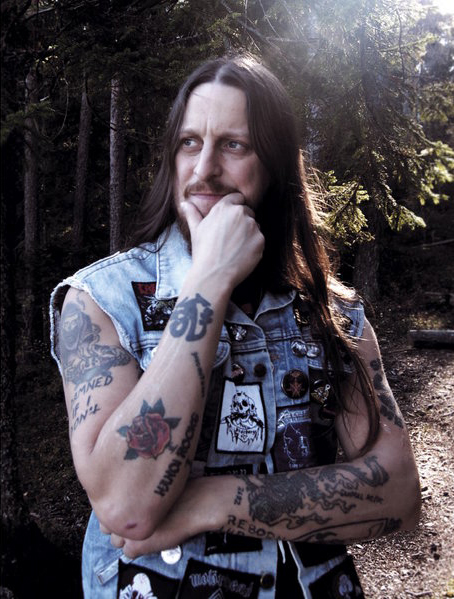 This time we have a mix of different styles like raw Punk, Crustcore & Motörhead-ish sounds. Please tell about the development of the new compositions! How ran the songwriting? Who of you guys have written which song?

„The songwriting was 50/50, very fast, for my part at least, haha, and no fuckin bullshit, our main inspiration area is now something like 1970 – 1985. I would describe the material as free.”

Please comment each one of the upcoming tracks with a clear describing statement and words about the lyrics!

„Whenever I see bands answer this question, I want to go and hide. Sorry. I can say that "Forebyggende Krig" has some Dream Death influences, which makes us about the second band ever to have that, the other one being Cathedral.”

The album title „The Cult Is Alive” – Darkthrone absolutely alive, also with the modified style?

„As usual, my titles can be understood in many ways, and it's up to the beholder to guide him/her itself.”

So, how much is the good old cult spirit of Darkthrone worth for you? Do you see Darkthrone actually as a cult act?

„Everybody else does... The good old spirit means everything to me, I haven't liked any style since Ved Buens Ende‘s great stuff in ´94, and Darkthrone stopped following contemporary bands for inspiration in around ´89-´90 basically.”

And how´s daily life in Norway? Which things you do mainly besides making music day by day?

„I work full time to keep my feet on the ground, I take care of my woman and I am deeply into the outdoor forest life around here. We have so much forest you wouldn't even begin to believe it.” 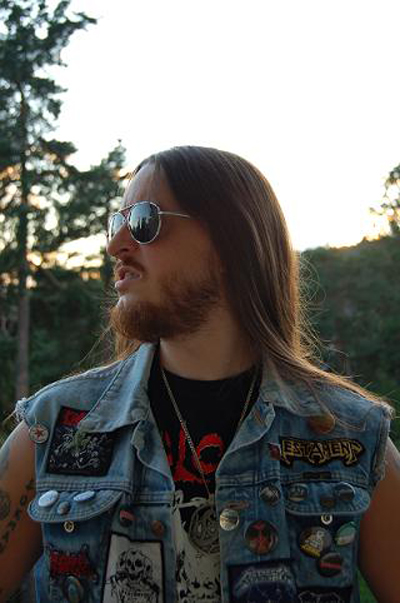 What is still your biggest dream as a musician? If you have one...

„I haven't called myself a musician since 1990. But as an artist I wish that people could understand what I do with Darkthrone. Only a few does. Hi Oscar!“

Many fans would love it, but – surely it isn’t easy for you guys, to carry on year by year with the same style and music. What can you tell about? What do you think about the more and more going hypocrite European Black Metal-scene itself?

„Beat me, but I haven't followed any scene since ´94/´95 really. I am setting up my own scene with a circle of friends who understand Metal like I do.”

Were new gigs for 2006 already planned? Do any plans for a special Darkthrone show exist?

The new Darkthrone-video – what is to tell in general about it? Why this time a video? Absolutey unusual for a true nordic cult act like Darkthrone. Do you fear in any way the surely upcoming „sell-out”-choirs of the everlasting nostalgic die-hard-fans?

„Well, I haven't seen these video yet, but Ted told me it is ultra primitive of course and in the spirit of our sound. So there. I don't know anything around it apart from that. Ask Ted!”

I saw the video, and I like to mention, that it´s absolutely nothing special in my eyes. Just two cool guys in the woods, hangover and walk around. Are Darkthrone completely fed up with „mystic forest” themes?

„Hm, I wouldn't want anything special. Why always this special? I hate music videos with flashy shit that makes the eye listen more than the ear. I haven't seen the video and I don't care what people think anyway. I know it's cool. We aren't children, the forest obviously means something else to us than a lot of other people.”