Simply fabulous all around, what these four power witches instigate with their giga-dark Death Metal on „Echoes Of The Soul“.

Experience and skill is one thing, immense greed for extremity and class is another. Crypta, however, have both! The line-up unites singer and bassist Fernanda Lira and drummer Luana Dametto, two former musicians of the thrashers Nervosa.

Joining the magical bunch are Dutch lead guitarist Sonia Anubis, ex-Burning Witches, and axe-fury Tainá Bergamaschi, also from Brazil. As an occult alliance, they hoist a brilliant debut album out of the unholy genre baptismal font. I talk to Fernanda.

Congrats for the new collection of songs on „Echoes Of The Soul“ - what an mega-intense & completely crushing performance, with so much incredible technical abilities! When was the initial spark for the band and how did the four of you find each other? 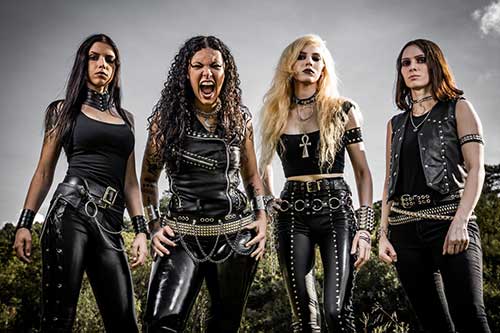 „Me and Luana first thought of Crypta around May/June 2019 as a side project. We thought being in a parallel band and having a different creative outlet and another band environment would help us get a bit more motivated at our current main band at the time, but after we quit Nervosa, it naturally became our main project and focus. Back then when we created the band, we knew we wanted two guitarists and the first one we both instantly thought of was Sonia Anubis - we had been fan girls of her for a while, me personally I've been following her since she was a bassplayer only in one of her previous extreme Metal bands and I always adored her way of playing, stage presence, vibe and style. We asked her if she would be available to be in project with her and she instantly said yes. As for Tainá, that's a completely different story - she was a total stranger for us, none of us had ever heard of her before, but then, out of a sudden one day around April last year, she got in touch with me saying she noticed me and Luana had a side project going on and that in case we were looking for a guitarist, which we were, she would love to send some material and maybe join the band. She sent me a video of her playing ‚Crystal Mountain‘ by Death and right there I knew she was the right one!“

The hard thrashing sound and all the different arrangements of the album are pretty original - who produced it?

„That's exactly how we wanted to sound - raw but still aggressive! Our friend Vakka (Fossilization, Jupiterian) produced the album and gave us some tips here and there to help us achieve the sound we wanted. But then, for the mix, we instantly thought of Arthur Rizk, pretty much known exactly for having an organic but heavy signature on his mixes. Then, for having a powerful master, nothing better than getting an experienced engineer to make your album sound good in every format possible, and for that we got in touch with Jens Bogren, who reached what we wanted exactly on his first try!“

For what kind of musical ideals stands „Echoes Of The Soul“?

„We wanted firstly that the band sounded like old school Death Metal, but once we started writing, we noticed our music was naturally evolving to something else and we just let this fluidity happen and in the end what we got was a Death Metal hybrid, there's a little of old school and modern, rawer songs and more epic melodic songs, a little bit of everything. We try not to label ourselves, we just wanna write Death Metal with all the nuances that come show up during the writing process.“ 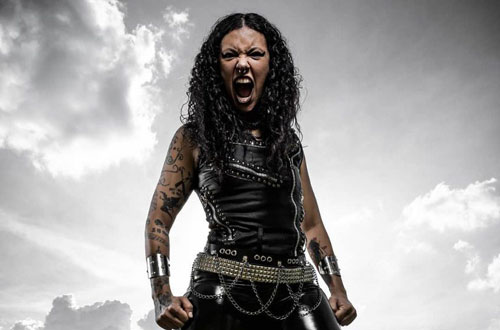 The guitar work is great! I can hear some - melodic - hints of good old Chuck and Death ... how much do you have to practice to be so polished and still punchy at the start?

„Death is definitely one of our influences, mainly from our guitarist Tainá Bergamaschi, she writes many cool riffs inspired by them. We all practiced a lot before getting in the studio, cause we knew the studio time was tight and wouldn't afford many mistakes, and also because we would not have time to have a rehearsal together before the recordings, so we made sure we were pretty sharp when playing the songs at home, in order to nail them at the studio.“

Your demonic, fully possessed vocals are surely not from this world ... ... to sing, growl & summon like that, you truly have to be on the dark side of spiritual self-discovery, don't you?

„I'll take that as an amazing compliment, haha! All those growls involve a lot of technique and I made sure I did my best to adapt my vocal signature to the Death Metal genre. But, of course, whenever I sing, i put a lot of feeling and energy on my voice, that's why maybe you got this feeling when listening to the songs! Every song in the album has a deep, intimate meaning to me, they are strictly connected to some of my core beliefs and processes I need to go through, so whenever any word of them comes out of my mouth, I make sure they're meaningful and sound full of intensity and emotion.“

Is it allowed to ask you about any special musical influences which may led to the new material?

„I think the album is a combination of all our individual influences and we have a pretty wide range of varied tastes when it comes to Death Metal. Saying for myself, I'm very influences by 90's Death Metal from the US, so Morbid Angel, Death, Deicide, Obituary for example are huge influences every time I start writing a song. I also love some Polish Death Metal, like Vader, my favourite, which really inspires me and was a huge inspiration for our second single, ‚Starvation‘, for example.“

It feels excellent for me to listen to the new songs - what kind of emotions dominates the new material?

„We're all very intense people and musicians and the songs are also a mix of many different feelings. There's definitely a lot of passion and excitement, but also I think each of us carry more intimate emotions that can only be expressed through music. To me, personally, this album is like a personal rebirth for me, so in each song I made sure I've put a lot of intention and gratitude for having the chance to be starting over and also a lot of passion to make this restart the best possible musically.“ 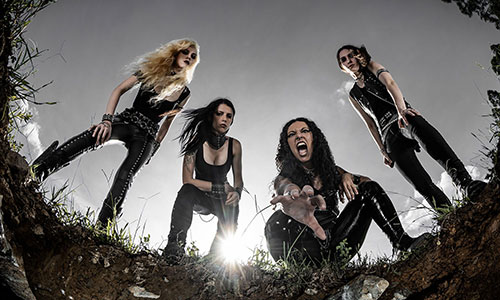 What topics do your new song texts deal with mainly?

„Most of them are about psychological aspects and things you learn and processes you go through when on a journey of self discovery and improvement. Some of them are also protest songs, but written in a more philosophical, poetic way, like ‚Blood Stained Heritage‘, ‚Starvation‘ and the bonus track ‚I Resign‘. All of the lyrics are somehow connected to death, to match the usual theme of the genre, but not actually death only, but death in many different, metaphorical and figurative ways, like end of cycles, death of the ego, and stuff like that.“

Who wrote the lion’s share of the material - and how long was the work in total for „Echoes Of The Soul“?

„The writing process is very democratic so there's a little bit of everyone's opinions and taste in every song. Most of the riffs are nearly equally by me and Sonia, but everyone suggested changes not only on them, but also in drumlines and the structure. The one who had less contribution on the album was Tainá, because when she joined the band, the album was nearly wholly written, but she wrote her solos for all the songs, suggested changes and additions riff wise in many songs and also wrote the bonus track nearly on her own!“

„To me, personally, it was adapting my way of singing and the metric I was used to in a song, because I was singing Thrash Metal before and it had to change a lot to fit nicely in Death Metal - it was really a study i needed to do. Also, the only song that was pretty hard to create bass lines to was the bonus track - it is definitely the most technical song in the album and some parts it was really tricky to implement bass notes that would match the guitars, but I was able to get it in the end, so all cool.“

„Thanks for the chance of talking a little bit about my works and for everyone who's reading this, thanks a lot for the support, it truly means a lot. Keep supporting metal, we are all the sole responsible for keeping the metal flame alive and burning! Ah, and see you all on the road soon, hopefully!“