When Jakke Viitala prepared its first own demonstration recording medium in autumn 2007, the Finnish guitarist wanted to make the three contained songs out of its feather actually accessibly only to his trusted ones. But it should turn out quite differently.

For Viitala got familiar with the wishful thinking already quite quickly, to give a broad ranged auditorium listening joy with its works. Damned good idea – the enormously powerful Symphonic Epic Folk Metal compositions on the current debut album „As The Path Unfolds…” are same of to such an extent fascinating drama nature, that they could be used also as aesthetic soundtrack in an very costly produced Hollywood bombast movie. 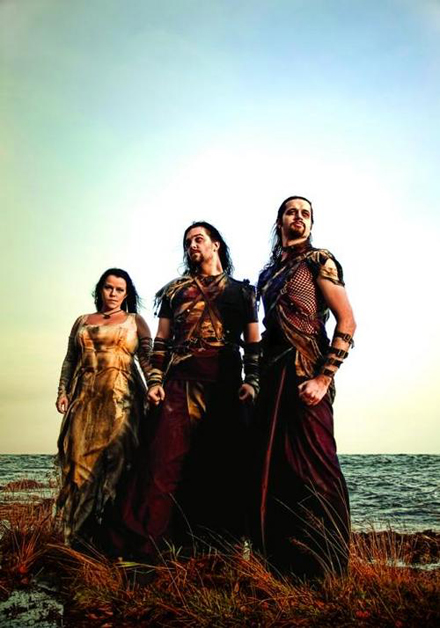 Although the way to the American movie center or to a big success there seems currently still very far for Crimfall, I pull Jakke in front of the interview microphone precautionary.

Jakke, could you please give a short review about the past years of your history as a musician and the reason for founding Crimfall for all those, who don't know you yet?

„Even my "musical career" started in elementary school with classical guitar, before Crimfall there is not that much musical history to tell you about. The earlier bands I was playing in, were more like friendly based garage bands without any serious goals to pursuit. I personally was aiming higher, but with those groups it simply was not possible. After I made the first version of our song "Where Waning Winds" in 2007, my friends told me to make something serious out of it. This was like the kick off for me to found Crimfall. I asked Mikko and Helena to perform on our only demo "Burning Winds" and with that we got the deal with Napalm Records early 2008. The deal was surely the best moment of my career. The summer and fall 2008 were spent for recording our debut album "As The Path Unfolds..." and the album is finally out in February 2009. There is my short history in a nutshell.“

Dou you feel a spiritual connection of your creative soul with the traditions and the ancient wisdom of your fatherland Finland?

„That is maybe a bit too strong statement. But one thing a can say. I'm proud about our own culture and by composing Crimfall music with all it's traditional elements, I feel somehow the connection to my roots and fatherland.“

Which is the most inner driving force within for you to create such epic, operatic, various and bombastic Metal music?

„I wish I could explain it. But for some reason I just need to do music to express myself. Even I don't write our lyrics, the songs present the stuff I feel inside of me in some level. By using the orchestra as one of the elements in our music it gives me even more variation to express different feelings. There is no better feeling than the moment when you have a new song with all it's small details and large themes in your hands.“

„My main influences come from movies. The general idea how the soundtracks support the movies and you can even "see the film" by only listening the music, is something to aim for. Composers such as Michael Kamen, John Debney, Danny Elfman, Howard Shore (and the list goes on) are the main influences for me. From metal side, I don't have any specific influences. I have been listening metal music since I was a kid so the influences are coming from various sources. But for example I like how Turisas and Dimmu Borgir have combined the orchestra with their aggressive music.“

Let's talk straight about your current new album; what's behind all this?

„Behind this all is one 3 song Demo, which apparently got out of hands and transformed to a real album. The songs are pretty personal to me. When I started to compose the songs for this album, I was only concentrating on the music. It is better not to have any expectations when making the debut album. Without a luck, even the best albums might not get the attention they deserve. So with debut it is even harder to tell what happens.“ 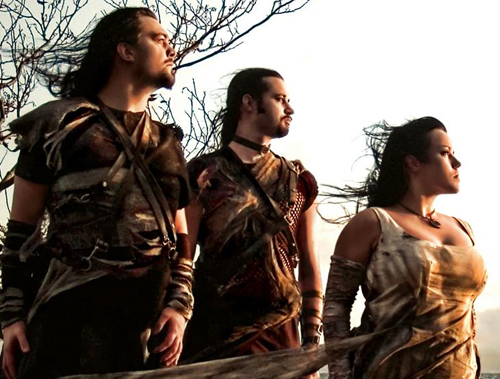 Where you`ve got all these great catchy melodies for „As The Path Unfolds…”?

„I really don't know. I get the ideas when least expected. Mostly when I'm not trying to compose. For example the melody and rhythm for our intro ,Neothera Awakening‘ was discovered when I was driving with my scooter. C-part for ,Shadow Hearth‘ was composed on Munich‘s railway station when waiting the train many years ago. ,Novembre‘ was composed in 15 minutes from the scratch. So there is no certain thing that gives me these ideas.“

Who or what influenced the writing of the lyrics for the album – and what are they exactly all about? Is it a concept album? What Crimfall wants to tell the listeners with the lyrics?

„To avoid misunderstanding, we have to give credit to our male singer Mikko about the lyrics. He is the man behind those. So I forwarded this question to him and here is his answer:

,The most important and primeval influence for the lyrics is always the music. It is the background and the beginning where the story is then led to its inevitable conclusion. And as the music is diverse and evolving into weird directions so are these stories more of individual pieces themselves without one coherent concept. The background is often in the dark violent past of the mankind, war, eternal lust for power, loss of heroism and divinity but also personal deification. You could say the themes are often tied to the more nihilistic view of the world, with perhaps some taste of the Luciferian theology. Unlike any direct preaching these themes a more interwoven into deeper textures and symbolism and are left for those who are interested to find.‘”

About the fine front cover art of „As The Path Unfolds…” – was it yours or Verwimp's idea?

„The original idea was mine. Then Kris started to make drafts based on the instructions. After he painted few different images, we all were happy with the concept. Then he finalized the picture by adding details and such. The image is about remainings of an epic battle, where waves are washing away all the corpses. In the front, there is a depressed warrior looking back the mess he was involved. The painting has lots of symbolism in it, which I think is better to leave for the viewers to figure out. But I personally love the picture and it is like our music captured in one picture.“ 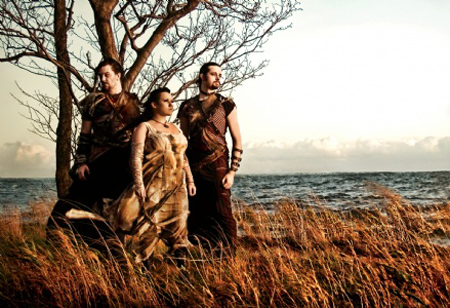 Any live gigs or a tour of Crimfall planned in 2009? Surely your monumental art is difficult to represent it on stages.

„It is not a secret that we will use backing tracks for all the orchestration and choirs. Everything else on the stage is as real as it can get. We are now practicing heavily to get our set working perfectly. I think we are ready about the same time when the album is released. Hopefully we get a change to do some gigs and even longer tours.“

„I think some bands will slowly grow out from their original style, which is natural and might happen to any of us. But as you said, some of the bands are changing once in a while their style to stay popular. Maybe it is good thing from the money point of view. But for me it sounds strange to make music from that perspective. I have different things on my mind to keep me motivated.“

„Well well... it is more like a shot than a drink. It's called Fisu. It has Vodka mixed with Fisherman's Friend candy.“

Which CDs rotate in your player currently the most?

„At the moment I have a period when I'm listening 75 % of my time some soundtrack. Not any specific, but to name a few. Band Of Brothers, Passion Of Christ, Hero and so on… 20 % of my time I listen to various metal albums such like ‘Varangian Way’ from Turisas, Dream Theater albums (seriously!), Dimmu Borgir, Soilwork, Opeth... Remaining 5 % I listen to something completely different; like for example The Flower Kings.“