Finnish Black Metal horde Count De Nocte was originally founded in Heinola in 1992 with a different name. The purpose was to play dark and melodic Metal.

The original idea has been developed over the years as the musical skills have been improved and the line-up got stable, including a very talented keyboard player. In Spring 2000 they planned to record nine new songs for a forthcoming full length release, which was one year later available again through a record label under the title „Carpe Noctum”. This marvelous and melodic Black Metal album shows one more time the immense capabilitys of Count De Nocte.

„Carpe Noctum” unleashes hellish raging, devilish devastating and arch-dark powers from the deepest abysses within and it‘s very atmospheric in the same way – a true and timeless classic. Reason enough for me, to contact the guys immediately for doing an interview.

How you´ve found to the record deal?

J. Hohtari (drums): „Classical way, we send them a demo tape and they liked it and wanted to published it. And also if our 1st tape sells enough then they'll release also a MCD for Count De Nocte.“

W. Saurén (git): „After the MCD we negotiated with Mad Lion about the release of `Carpe Noctum`.“ 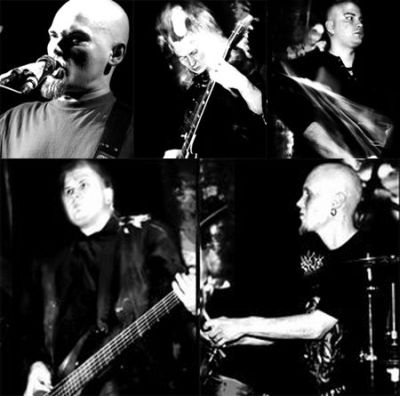 Are you satisfied with the work of these label?

J. Hohtari (dr): „Quite satisfied so far, they've been doing a good work for us, also the promotion work has been good in eastern Europe.“

W. Saurén (git): „There are a couple of things that could be better. I don't know if it's because of Mad Lion or the Finnish distributors why our records are not for sale here in Finland. Because of that we get our own part of the CDs by mail and that is causing problems with customs etc. But that is probably because of Poland is not part of the EU. And the other thing is the difficulty of communication. We have to communicate by email and because the Mad Lion guys are so busy, which is understandable, there are delays on communication. But all in all we are satisfied with them.“

What does the title of the current album release mean?

W. Saurén (git): „It is a word game, as you say `Carpe diem` (`Seize the day`) then `Carpe Noctum` means `Seize the night`… Everyone can draw their own conclusions about what it means.“

The songs out of your newest album „Carpe Noctum” - what is the main meaning behind them?

„Well, that is a difficult one, like our vocalist Nieminen says: ,Everyone dies, everyone falls. And the Time will wait for us all…‘ So, this album is especially about the final falling, about the short fly, with petrified wings, of life.“

Which were and still are the inspirations for the music of Count De Nocte?

W. Saurén (git): „The inspiration comes mainly from the music we listen and from everyday life, by everyday life I mean the feelings that we experience. I can't say how much books and films have inspired us but here are some nice ones:

T. Nieminen (voc): „All those above and I must include Clive Barker's `Hellbound Heart` and books of killers…“

What is your definite artistic and idealistic goal with Count De Nocte?

J. Orpana (git): „To be better as a musicians and share the feelings which we feel via music.“ 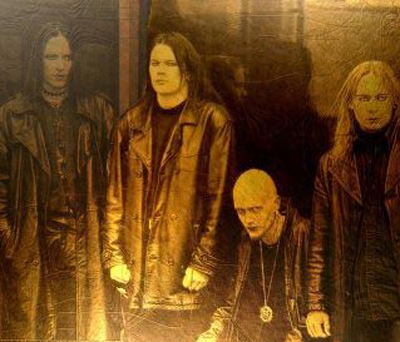 Live gigs - anything planned there currently?

J. Orpana (git): „We have a couple of gigs in May but it's quite difficult to get gigs here because we don't have distribution for our records in Finland. Since our records are not for sale here people don't know us that well here.“

What you feel deep inside, when you play on stage?

W. Saurén (git): „It varies depending on the level of intoxication... No, really it depends mostly on the atmosphere at the gig place. At best it's almost better than sex.“

J. Hohtari (dr): „I just concentrate my drumming and I really don't think anything, but drumming.“

J. Orpana (git): „I'm concentrating for difficult guitar riffs (there are a lot!!), playing is very technical. In deep I feel great satisfaction to put out more and more crushing and beautiful sounding guitar work.“

J. Hohtari (dr): „There's been some conversations with the record label `bout touring in eastern Europe we'll wait for it and hope it will happen. Also new songs are made and we'll enter studio in next autumn, if all goes well!“

How long you will play this kind of music?

Which deep inner (dark) feelings the members of the band tried and still try to reflect with the music?

J. Hohtari (dr): „For me nothing special maybe to give people some good and maybe dark feelings hard to say.“

J. Orpana (git): „I used to be so pissed of about everything, I reflect my misanthropy and cynicism in musical way.“

Are you guys interested in Occultism and also Satanism?

J. Hohtari (dr): „Of course… but not so much that you could call us Satanists or Satan worshippers.“

J. Orpana (git): „I have read some books concerning about terms above, they are very fascinating and give new aspects to see things. I don't call me Satanist of even Occultists, because I don't do any spells or witchery stuff, I'm just keen about them. I used to be free with my mind, I don't belong to any religion at all.“

T. Nieminen (voc): „More fascinated about the condition of mankind…“

Which were your early idols out of the Black Metal scene?

W. Saurén (git): „I don't know about idols but for me the most influential Black Metal bands were and still are Emperor and Cradle of filth. But even more than those two I was influenced by Death Metal bands like Entombed, Dismember and Edge Of Sanity.“

T. Nieminen (voc): „All the noises and voices in my head, here. So many different Metal bands (and none-Metal) has made indelible wound in to my heart, so hard to name one over the other.“ 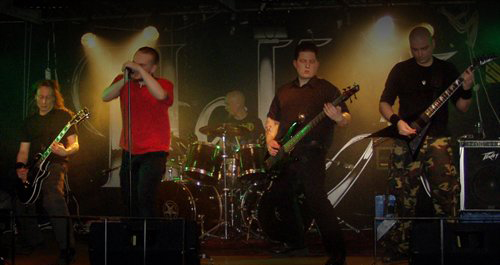 Please give a detailed list of releases, which are out so far, incl. demos and MCDs!

In which city in Finland are you located?

W. Saurén (git): „We started the band in a small town called Heinola but during the last 4 years we have moved to Tampere. Nowadays only our vocalist lives in another town, (Kuopio).“

Exists there a fruitful Metal scene? Name a few bands from there, please!

J. Hohtari (dr): „In Tampere quite lame, but one band is worth to mention and it is Diablo, but the scene here in Finland is getting better all the time. There are more and more gig places, but the scene is still quite a small one if you compare the situation like in Poland, because most of the people here listen to some really crappy shit like Eminem, and other really shitty shit, but yeah this is marginal music.“

How the musicians of Count De Nocte came together?

W. Saurén (git): „We were in the same high school back in Heinola.“

Please give a band history, which contains the cause(s) for founding.

J. Hohtari (dr): „Me and W. Saurén formed the band back in 1992 under a different name, shortly after that T. Nieminen joined the band. After a couple of years J. Orpana came in and at that point we changed our name to Count de Nocte. We also had one bass player for couple of years (S. Pajunen) then J. Salonen came in (the guy who plays on the new album). After the Total Devastation tour in 1999 J. Aronen (keyboard) joined in. A. Ahonen came in after recording `Carpe Noctum` and this happened last autumn 2001. Causes for founding, well there wasn't any particular cause we just wanted to create some heavy shit.“

Which is the current line-up?

How long is it existing?

W. Saurén (git): „Our previous bass player left the band a year ago and we had some problems replacing him but after a while we found A. Ahonen who joined the band last autumn. So we have played with this line-up about seven months.“

How often during the weeks the band is meeting for rehearsals?

W. Saurén (git): „A couple years ago we had problems with rehearsing because all of us were living in separate towns all over Finland. Now we can rehearse almost as much as we want to, except with our vocalist because he lives in Kuopio. Normally we rehearse two to four times a week.“

How do you guys writing on new songs? Within rehearsals, too?

W. Saurén (git): „Normally I and J. Hohtari make the riffs and then we arrange the songs together with J. Orpana at the rehearsal place.“

J. Hohtari (dr): „Sometimes new riffs just come when I just jam with guitar, sometimes I have an idea in my head which I try to express musically.“

T. Nieminen (voc, lyrics): „Quite a cliché, but during the night time and when the mood is right for it. Day gives no pleasure for it.“

T. Nieminen (voc): „Count De Nocte is partly Latin and English and means something like `Count of the night`. It could be a name also?!?“

„Thanx for the interest. Hopefully we'll see you all next autumn 2002 when we should be touring there! Visit http://www.blackmetal.com/~mega/CdN! Heviä Kurwa-Perkele!“