For their third longplayer, the Heavy Rockers from Stockholm designed a very special story, which revolves around the world-famous Cthulhu myth.

Originally devised by the American writer H. P. Lovecraft, the theme has become the eternal classic of gloomy literature. Accordingly, the band around singer and lyricist Anders Ljung is also mystical, evocative and epic on „Miskatonic Graffiti“.

Musically quoted is thus primarily a 20-year period, which took its course in the early 1970s. But this timeless and not only melodically independent album also offers a considerable range of variations, arrangements and atmospheres. I talk to Anders.

Would you name the music on the new release typically for Casablanca?

„EBHR- Epic Big Heavy Rock! It is what we use to name our style of music and I think it’s extra EBHR this time - so typically yes, but more, a lot more I would say.“ 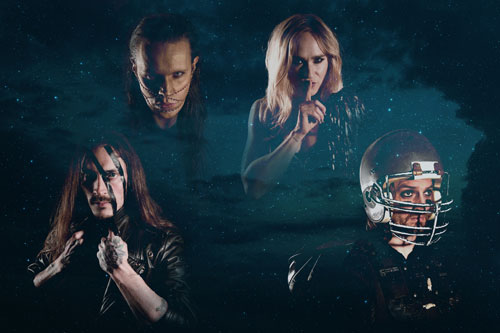 „Variety! Every song is different from each other and therefore helps telling the story of the album, and also saves the listener from boredom! It works perfect if you wanna spend an hour and listen to the whole, but every song is its own universe in a way and works great on its own as well.“

For which musical ideals does stand the new release?

„Well we always said we’d never do the same album twice and this time we had aeons of Casatime to really stretch the material so we did. I hope we will be around to continue the progress of making music together and grow as individual musicians for a long time to come. I cant say what we will sound like ten years from now but it will surely be something else.“

What’s your very own personal view inside the ‚artistic spirit‘ of the new album?

„We found the famous creative flow quite quickly and set our spirits free to reach that high. It was like being on drugs every day and night for 5-6 months! The hardest part was to arrange the whole load of material and realize we had to take 20-30 great songs out.“

Noteworthy differences to the previous album(s) of Casablanca to mention?

„Aproximately half of the album is a classic Casarocker but there rest will hopefully get ya and bind ya forever! This is for me the sixth album release and I’ve never listen to a finished album ever before like I’ve listen to this one.“

Be so kind and tell a bit deeper about the newest material!

„It is a mixture of all that we have listen to in our lives and what we were capable to do at this time. Writing and recording is and has always been the easy part in this band, but arrange and make them interesting is harder. But a large record collection and broad musical tastes helps a lot.“

Please tell a bit about the lyrical main content!

„The story surrounds a gang of four main characters all different from each other who keeps it together and fights for the free spirit of man right before the fall of civilization. Rock’n’Roll dreams clashes with warmongers from the other side. We have fast cars, loud love and bad intensions coming out of the speakers like fireworks!“