The entraining original snatched up attacks of their solemnly celebrated Celtic Pagan Folk Metal hymn own truly the trample-strength of rabid field nags.

And also the Parisians Bran Barr appear otherwise on the briefly appearing second album blow „Sidh“ musically of its powerful side.

The recordings for these release have been done already years ago, between 2005 and 2007 – but these great songs of course know no expiration date!

And such rhythmic overmightinesses are here vis-à-vis to highly refined playing-technologies, which are brought often delectable filigreely to each other into the throughout homogeneous creations of the band. Arch-heathen into the deepest core of its flaring idealist souls, the unwavering Frenchmen know around the immensely high relevance of authenticity in such special art.

Of the proud embossing of this troop and of „Sidh“ therefore persistently impressed, I have grabbed guitarist Nesh Keltorn for a comfortably dialogue. 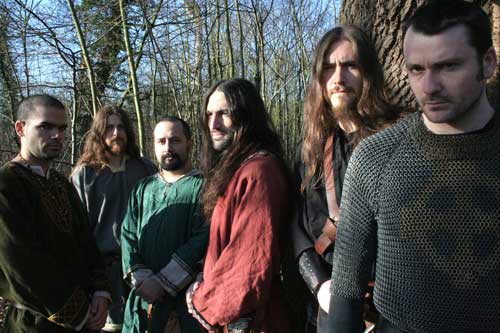 Nesh, why you do this kind of arts – better said, which is still the most inner driving force within your creative heart to create such metal music?

„We do this because we love it! We are metal fans since our teenage years and still today. It’s our metal way of life!“

„Join the clan of Ultraigh” – which means this?

„It’s part of the story told by Bran Barr, based on a novel written by Aed Morban.

„To make it simple, Ultraigh is a land were Keltains are living. They are fighting the Formors who betrayed them. Our first album relates the story of different characters through this war… But the best is to read the story.“

Do you see your Bran Barr horde as a clan?

„In the beginning it was in some way a clan, but with time, line-up changes and city life, we turned more to a group of friends who spend time together at birthday parties, weddings and some nights in pubs … besides rehearsal and concerts.“

Do you have in your home country a dedicated fan-base?

„Yes, the band is existing for more than 10 years. The first show was in Paris in April 2000 and since then we gathered fans in place we played and through the internet.“

What’s your personal view about the metal scene in your country?

„There is good and bad stuff, as everywhere. One of the problems in France is that we are a less metal country than Germany, so most of the bands remain in the underground. It’s not easy for bands to dig their way out… maybe the fact that French are not keen on taking risks so labels, organizers and even bands do not dare enough and finally give up. The best proof is that we had contacts mainly with German labels.“

Do you guys practise your love to ancient ideals & your dedication for our Mother Nature at the weekends in the forests of your area?

„In some way yes. Some of us are members of a re-enactment group of the Viking age, and it happens that we spend some weekend to live as our ancestors in tents, or even build a middle age house. We also love to take a break from city and spend some time relaxing in the country.“

What has been happened with Det Germanske Folket Records & how you got the record-deal with Trollzorn?

„We’ve spent a lot of time to finish the mastering and layout of the album. When it got ready, Det Germanske Folket decided to cut our deal claiming financial reasons. Even if it was in some way disappointing, it finally just delayed the release of the album and gave us the opportunity to sign with Trollzorn which we consider as a better label than Det Germanske Folket. Actually, we are happy with this change since Kai and Stefan from Trollzorn are currently doing a great job to support Bran Barr.“ 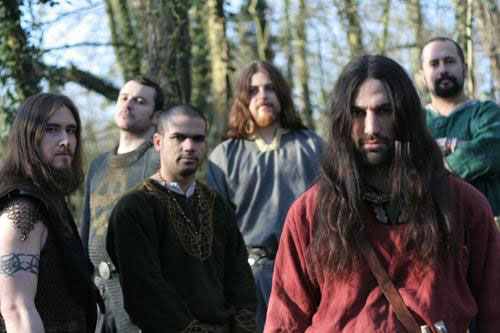 When we’ll have the new album of your band in our hands here?

With which expectation(s) do you looking forward to your upcoming release?

„We hope it will pierce the heart of listeners like a spear, and that they won't go to battle without it.“

Which differences to the previous release are waiting there then for the listeners?

„The first album was home made, recorded and mixed by our own hands, so the listeners of this second album will notice a great difference in the sound quality. It will strike them like an arrow on the battlefield! Besides that, “Sidh” is the natural continuity of “Les Chroniques De Naerg” and you might be able to hear most part of our influences, from traditional metal to extreme metal.“

Where you’ve got all the ideas for your specific pagan metal art? When they come regularly at best in your mind?

„We listen to a broad range of music, different kind of metal, but also folk and medieval music. We dig also ideas in books, movies and role playing games sometimes. As far as I am concerned, I like to take my guitar and let the idea comes… playing until something comes, and then try to build around it.“

„Not an easy question mate… to my mind, they can do what they want…We are playing what we like to play, if people like it, that’s good. Music is mostly personal, but I don’t really agree with those who play music for the bad reasons.“

What do you think, why so rare bands play really good epic heathen Metal nowadays? Is it a question of the broad range of inner views & feelings?

„Some bands decided to play folk metal because it was cool…and trendy. Bran Barr is born in 1995, and we had time to learn to work with other instrument like whistle, bombarde, pipes and so on.“

Which are your favourite metal acts?

„I will say, the first that comes to my mind is “Hävitetty” from Moonsorrow, it transports me. I will add “Storm” from Fejd, even if it’s not pure metal, I’m fond of it. “Once Sent From The Golden Hall” from Amon Amarth is still an album that I love to listen.“

Do you consume TV, Radio and Newspapers at all – with all their targeted spread cruel “news”? I personally avoid them all as good as I can!

„I’m not listening to radio nor watching TV… just sometimes read the news on the net.”

Do you have plans for live gigs in 2010? When you’ll come finally to Germany? Are there any plans for a real tour?

„So far, we are confirmed in 2 festivals in Germany: the Black Troll Summer Fest and the Hörner Fest, both in Summer 2010. Regarding a tour, there is no plan yet.“

Which is your preferred kind of beer & booze?

Your main recommendation to all the nowadays more & more depressive big-city-mutants?

„Stay true with yourself, and don’t forget that we are part the nature that surrounds us.”