Alarm! Namely, from one of the most original and most emotional hard troops across the Atlantic at all. The truly monstrous impulsive Dark Metalcore of the US sextet offers bright creative madness, sensational instrumentations, thunderous rhythm detonations and a stunning range of moods.

Before about a decade the dizzying bunch threw together his ambitions and fortunes in LA. Now these six extreme musicians bring their fifth long hammer ruthless down. Mercilessly crude Thrash brawls, built in the already hellish eerie sound, serve the innovative minded six-piece as a vehicle for numerous explosive outbursts.

And even crudely beautiful Black Metal viciousness besides symphonic bombast comes to fruition on the massive hypnotic gloomy-work titled "Declaration". The latter increases the charm of this unusual and beastly good publication enormously. Drummer Derek Youngsma tells a little about the new release and the backgrounds. 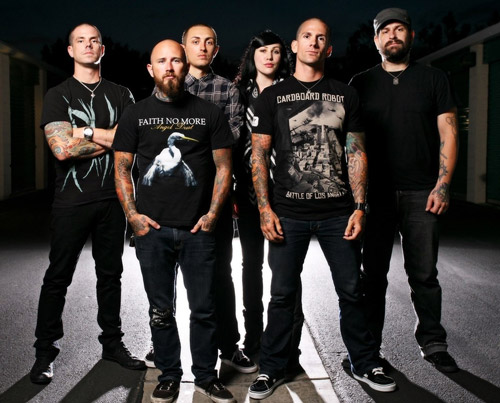 Hey, Derek, how are you at the moment – longing for a trip into well visited concert halls?

„Things are good. We are excited for the new record to come out, we've been touring hard and can't wait to get out and headline in the spring.”

How is going the current chemistry inside the band?

„The chemistry right now is stronger than ever. Jona came into the picture a little less than a year ago, and filled the void really well. His writing style is a little different and goes well with our existing sound. I think the overall morale of the band has been lifted a ton since the completion of the new record, and it shows in our live performance.“

What does the name of the band mean to you?

„We get asked this in every interview and we always have to come up with some "deep" meaning behind the name. Its just our name it sounds good.”

How has been found the musical style of Bleeding Through?

„When the band started there were a lot of bands from the hardcore scene starting to play metal. Not too many were any good, or very true to the metal bands they were influenced by. We were really into the American death metal stuff and as we progressed as a band got into a lot of the Swedish/Norwegian bands, melodic stuff and black metal. thats how the keyboards came in.“

Please name some musical influences for the new compositions on "Declaration"!

„We listen to a lot of stuff, big influences for us directly would be At The Gates, Slayer, Dimmu Borgir. And lots of others.”

Your own favorite bands?

„There are a lot of good bands out there, I like Throwdown, As I Lay Dying, Darkest Hour, Black Dahlia Murder and Misery Signals, to name a few off hand.” 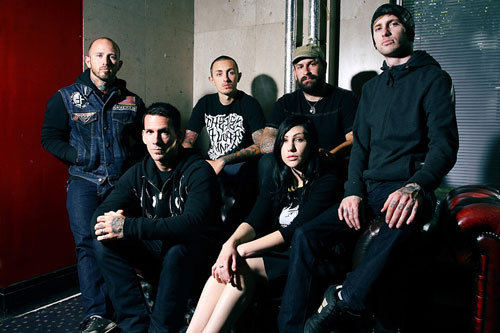 How deep is your personal connection to the used influences which got used into the new output "Declaration"?

Please describe your attitude as a musician! In which philosophy of life do you believe?

„I just try to do the best I can in what I do, I believe in supporting my family and friends and trying to make a positive difference in the world.”

What do you think about religions in general? In the opinion of many people religions will bring the mankind some day to an bitter end.

„Thats a nice opinion, as a band we are not religious and don't feel the need to slam anyone for their beliefs.”

The only god for mankind seems to be dirty money, since it has been invented. For money „they“ still do horrible things … what ´s your own opinion about that topic?

„Money makes the world go round. We need it to live and get around in the world, unfortunately there is a lot of greed in. But Communism is not the answer either.”

In which specific mood do you still feel the best creativeness?

„In Vancouver while we were recording the record it was grey and rainy a lot of the time which set a nice mood for the recording sessions. I personally need to get a good night sleep and drink some coffee.“

Please describe the main lyrical conception of the new release "Declaration" and please name a bit of the lyrical influences for the new compositions! 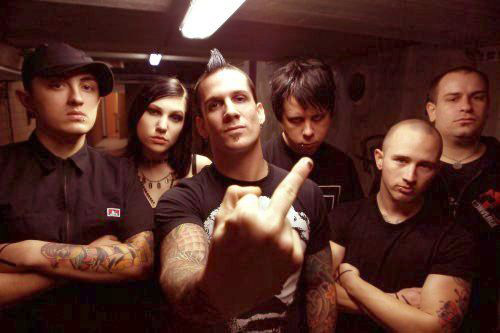 „The influence is different with every song, some songs are about places, others are about people, touring, music industry, there's even a song about the media.”

Which things do you prefer to do day by day mainly besides making music?

„Pretty mellow a lot of time at home when not on tour, I spend most time with my wife, we have a baby daughter on the way which I’m sure will take the most attention soon.”

Which was the very best live show of the band to date?

„We've played some really huge shows and some really fun shows but I think the best over all for me was Sao Paulo Brazil, it was the craziest show I've ever seen.”

What´s special at a show of Bleeding Through?

„I think what's special about us is no matter what the circumstances are, we are gonna play our hardest, like our lives depend on it. There is no show we won’t do.“

„We will be back in Europe Nov/Dec with Bullet For My Valentine. Then we start headlining in 2009 all over the world.“