Since 1998, these extremely psychotic Frenchmen have been working unselfishly at their Industrial Black Metal production facility. Now the new and fourth album „Machination“ is leaving the trio's constant production bunker.

The rusty iron-throat of the band's leader Saint Vincent spits incessantly sooty-dirty articulation elements. But Vincent, to whom the second guitarist Narcotic and AcidJess help as a bass player, also tortures the glowing strings of his guitar and programs the drum computer. I talk to Vincent about his hellish team and the newest musical ejection.

How long did the whole songwriting process for „Machination“ take?

„I would approximatively say 6 months. I started to write songs back in summer 2010 then we recorded it in feb 2011. Blacklodge is not a band writing an album in two weeks like some bands pretend to do: it needs a quite long process to write music right balanced between Black Metal and the samples.“ 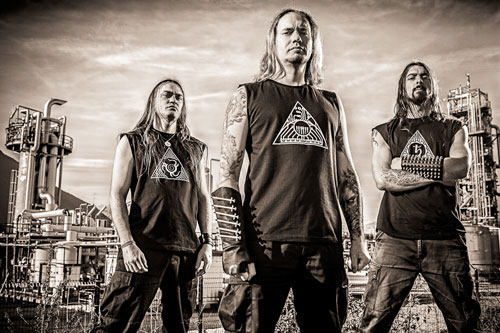 What is behind the title „Machination“ and the lyrical topics of the new album?

„The new album, subtitled ‚4th Level Initiation : Chamber Of Control‘, describe the infernal process getting in place on Earth to achieve the crowning of the latest, satanic Empire. The MachinatioN is the one commanded by SataN to gain power and control the human race in those time of industrial power and cybernetics. This strategy is fueled by the three forces of the TridenT: the prong Medusa, the prong Caesar and the prong Lucifer. Respectively they are associated with Destruction, Oppression, and Forbidden Revelations. Those three forces makes the human crushing wheel turning and turning all the nations of Earth into slavery, under the control of processes human created for its own demise. This is resumed in the first song, ‚TridenT‘.“

Be so kind and tell about the most important personal content within the lyrics of „Machination“!

„The first song, ‚TridenT‘, is inspired by a very strong mushroom trip I had back in 2006. All the lyrics describes what I saw back then! It was a very strong revelation, and it was important to deliver this message into a song, and globally an album.“

The new songs of Blacklodge are filled with many of very innovative and pretty interesting ideas. Some important details concerning the development to mention?

„Thank you. The will to experiment has always been part of Blacklodge mind and creation process. Always the need to push the limits of the extreme music we like to what we consider to be higher levels. The songwriting is always oriented to support the main concept of the album. The concept is ‚revealed‘ before (in this case, see the question above). The riffs are made aside from the samples. We take a lot of time to balance them, then we record the album and goes to the mixing session where our sound engineer, Tore Stjerna, gives it best for the final touch.“ 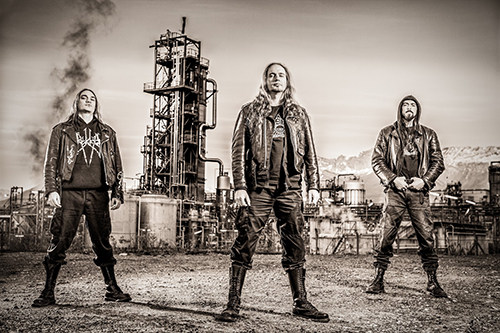 Which is the biggest power of the new album „Machination“ in your opinion?

„It has in my opinion quite much a ‚forge‘ personality, I mean, we put the elements of what Blacklodge has been on all the past albums and mixed it to create a more powerful steel, with more coherence, strength. We feel we improved the efficiency of the Machine.“

Who did act as the main songwriter for the new songs, and who is the main lyricist?

„I am writing the lyrics, the music and doing the artwork all by myself. So the three ‚me, myself and I‘ are working quite well together.“

How did the line-up of Blacklodge managed it to do the co-operation again so extremely productive and insane in one?

„The bass player, AcidJess, has been in the band since 2002. Narcotic, the guitar player, since 2007. It has been now 5 years with this line-up, and we played and toured reasonably enough together to have a good knowledge of what makes our interactions leading to the quality we want to match. Moreover, we are living in the same house, so we can rehearse regularly and enhance our music more easily. They also know how to interact with me to make the songs sounding better and achieve the best.“

Which has been your most lucky moment with the band during the creation-process of the new output?

„There is not much luck, mainly work and faith!“

What do you hoping for the rest of 2012 with Blacklodge?

„Now that we are part of Season of Mist’s forces and TMR Management booking agency roster, we want the shadow of the Black Lodge to cover as much as possible this dying world and spread the venom of Industrial Black Metal!“