They came onto the scene in 2002 with the then boom of the Ring trilogy so masterfully filmed by Peter Jackson - and left in 2011 after six albums released when said boom finally disappeared.

Finnish trendies, then? Rather not, because Battlelore formed back in 1999! Now, after a whole eleven years, the Epic Symphonic Metallers surprisingly announce their return. Asked at the beginning about the actual reason of the current - pretty surprising - return with their new album „The Return Of The Shadow“, guitarist and lyricist Jyri Vahvanen lets know: 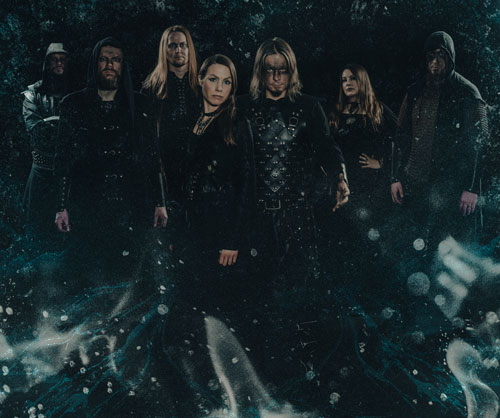 „Well, when we started our hiatus back in 2011, we really didn’t have any plan or thoughts how long it would take. Time passed by and after a few years it became quite clear for me that this is not the end and we will do at least one more album. I also promised to myself that the new album will come when it feels right. No time limits, pushing or stress whatsoever. It almost happened in 2016 when we played few shows, but our “flow” wasn’t enough back then and as I mentioned, we didn’t want to push it. Finally, in early 2021 our record label Napalm asked about the new album and suddenly the engine was on and we were planning schedules, finalizing song writing and booking studio time. It all came together very smoothly and quickly, and we really enjoyed the whole process. Now the album is done, music videos shooted and some gigs booked so this is really happening! It took 11 years, but here we are again.“

What was the main reason for Battlelore's prolonged absence - eventually also the waning of the Tolkien boom?

„Our absence had nothing to do with any Tolkien boom and we have never calculated our actions with the current Tolkien hype. The reason for our break was simply the lack of motivation and I personally got tired for the whole music business. Too many downs and only few ups in a row made me question the existence of the whole band, so I felt that now we must put a stop for it for a while. Six albums in ten years and a lot of touring took it toll.“

After such a long break, it's usually very hard to get back to old successes - how good are your chances, do you think?

„I really don’t know how the things will go. I believe that if we do this from our hearts and be honest to ourselves, the result will pay off in a way or another. It is a cliché, but besides the fans, we are doing this also for ourselves. The world has changed a lot since our last album and the business is different, but it looks like that our fanbase has been very patient and our “comeback" have got a lot of great feedback from the field. Also, our record label has faith enough to release the new album, so I guess we have some hope, haha!“

The new songs sound noticeably different than they did a decade ago - what do you think has changed the most in the overall sound of the 'new' Battlelore?

„I think we have our manners and noticeable personal styles in the song writing and together we create the true Battlelore-sound. During the years we have kept playing in different bands so of course we have developed and got mature with our skills and compositions. The age also gives you more experience and perspective which you may use in your music. We probably know easier what kind of riffs or compositions might work for Battlelore, and what could be the right angle for the songs.“ 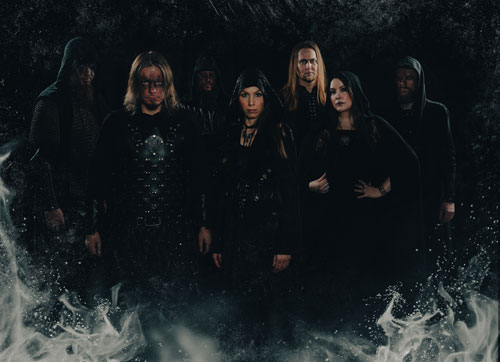 The current line-up - how good do it work out basically?

„We have worked together with the current line-up since 2005. We are all from the same town and knew each other before we ended up in the same band, so it has been quite easy to work together. The chemistry in a band must be in a good shape or otherwise it is like a bad relationship where everyone’s suffering. We had these few line-up changes during our first and second album, but after those we’ve been a strong and solid group.“

How did your collaboration for „The Return Of The Shadow“ go?

„Very nicely and actually very fast also! We all kept in mind that the only pressure comes from ourselves and we do not have to do anything we don’t want to. We enjoyed the recordings and kept things simple and easy. We made very good demos for each of the songs so it was easy to do our parts in studio as we all knew how the result should sound. Janne Saksa produced the album and his expertise helped us also a lot! We knew him from our previous albums, so we decided to book his studio as we like the guy a lot! I must admit that I was a little bit nervous about the whole thing, because of the 11 years break, but it all went better than great! We wanted to do things in a familiar way to avoid any unnecessary problems, so we also chose Dan Swanö for the mixing and mastering just like before, so it was a well-considered and safe choice for us to reach the best possible result.

Who of you guys composed the lion's share of the new song material?

„We worked for the album like we used to. One of us creates the base for the song, usually guitar, and the rest adds their layers piece by piece. We like to do “more than enough” arrangements for the single song as it is easier to take things off than make them more from the air. It was Jussi, Tomi, Timo and me who wrote the songs structures for the album and then Maria composed her synth and orchestra arrangements on it and Tomi and Kaisa made their vocal arrays. During the process we drop stuff or add some more and play with the different arrangements. I guess our style is quite basic how bands usually do it.“

Were any ups and downs during the songwriting for „The Return Of The Shadow“?

„Almost none! One small wondering for one lyric theme and then my brother Henkka (drums) came and said, just DO IT! - and it was solved! I guess I just needed some serious kick in the ass! Back in the days I had some writers blocks with the lyrics, and we might have struggled with the right kind of songs and moods etc., but this time everything was more than easy and I am sure it sounds in the result. And you probably know, there is a bonus EP “Lost Lands” with the CD-version of the album which consist the older songs from the beginning our break 2011. Those tracks differ a bit from the newer songs, so we decided to put them out as their own ensemble.“ 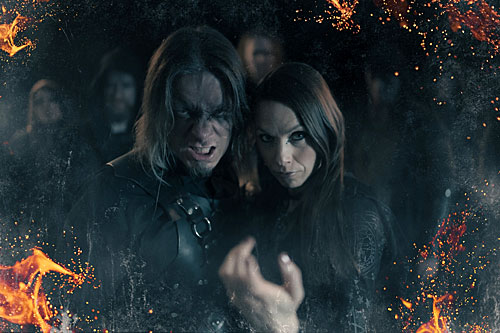 Allowed to ask you about any special musical influences which led to the new stuff?

„Hard to say any one particular as we all have our favourites, and we are music fans so you probably can hear a lot of influences in our songs. Lately I’ve been playing and digging a lot of traditional Doom Metal and in the other hand Timo (bass) adores bands like Behemoth and Watain and Tomi is working with some synthwave projects also so there is a lot of influences in one band.“

Nearly everything has changed since the release of „Doombound“ in 2011, the world, the music business, the societies - how much have you changed, how much have your views on true art changed now?

„Yes, over ten years since our previous album. Got to admit that it is such a long time, and a lot has happened in our daily lives. Most of us are now parents, we have mortgages and day jobs etc. so the situation is quite different comparing to 2011. But we all have been in music business and bands during these years so that part never stopped even though we didn’t keep Battlelore active. We’ve been playing in bands like Lowburn, Evemaster, Church Of Void, Lovijatar, Fimir, Oceanwake, Jonne, Sisäilmaongelma, Dark Elite, Black Neon Cult, Byron plus some featuring’s in our friends bands here and there so it is obvious that music still takes a huge part from our lives even without Battlelore. All that have raised our experience and matured our views for making music and of course our perspectives have widened. So, the true art is still there, and I am sure it will always be.“

„Older rock music like Bruce Springsteen, CCR, Billy Idol, Tom Waits, David Bowie, Queen etc. I also like synthwave a lot and it looks like it is quite popular today.“