Battlelore has been created in 1996, somewhere far away in a land called Finland. Their first full-length and mighty album is now available, the best collection of songs to express all the unique impressions out of „The Lord Of The Rings” trilogy from British cult author J.R.R. Tolkien.

„…Where The Shadows Lie” is the musical renaissance of the ancient mystical flickering flame deep within the dark realms of Middle-earth. The band have created definitely a multitude of fantastic emotions of epic proportions for this glorious release.

Through the wonderful music of the Horde quite impressed, I need to know more about this mysterious creature called Battlelore. Therefore I implore the vision of Battlelore with bass player Miika Kokkola, who has to answer the questions. 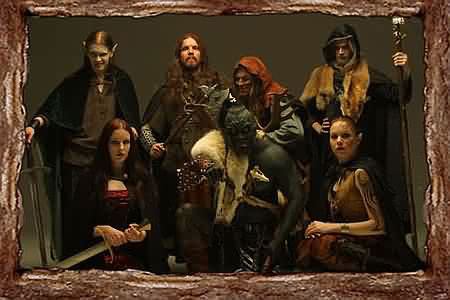 „The idea came for Jyri at 1996. He wasn't satisfied to the band where he played at that time so he started to find alternative choices for a future. The Tolkien inspired Metal was a main focus cause all the research of Tolkien's work gave ideas for a few songs. I talked with Jyri about the project from time to time and at `99 we thought that we should get a drummer and singer. Gorthaur and Tommi was an obvious choices cause I had a project with Gorthaur before and Jyri had played in the same bands with both of them. So we started to produce songs together and I suggested Patrik to Jyri. We all were pleased for Patrik's way to sing. So we were ready to record `Warrior's Tale` after a few months training. And you can hear that, hehehe. After the 'Warrior's Tale' Gorthaur was too busy with his main band and we thought to try Henri, Jyri's brother for the drums. We took a note of his unrevealed skills and now I can proudly say, it was a right move. At that time there were Black Metal influencing too much and it wasn't original. So that gave us a path we should follow and on the second promo we found out that now we had our own way to do Battlelore notable. During the recording sessions of 'Dark Fantasy' Maria and Kaisa joined to Battlelore. And of course we used Tommi as a second guitarist all the time. Mainly that's it and of course the idea have been refined since time have past. But the original idea is still here and it comes more stronger from song to song.”

Isn´t it a big coincidence, that your album hits the market in the beginning of the year 2002, just a few weeks after the release of the movie „The Lord Of The Rings”?

„Yeah its just an incident. First of all we've been doing this a long before anyone planned film and this hype around Tolkien. It is obvious that people think us as a 'new Tolkien wave' band, but they seem to forget our past. The movie itself doesn't influence what we do or what we are planning to do in the future, its just a one article amongst the others. The point is we are not making money with the movie hype as many people are. And with that I do not mean any bands or musicians. I just hate that the Tolkien's work is spoiled with Middle-earth toys and things by people who do not have any glue what Tolkien's work truely is.”

How long did it take to write all the material for Battlelore?

„Actually new material produced really fast. We had all the songs at `...Where The Shadows Lie` ready at the end of February 2001. Of course there has been a minor changes on the songs, but when we get in to the creative mood, bare-bones songs just, may I say, creates themselves. The most time consuming part of the songs writing process is when we take out every single riff and start to recreate parts again. We have done this before and it has been a good way for us. We wanted to add a few old songs to a debut, cause those are good songs and we haven't published any single demo. A very few promos have been sold to friends and that´s why many haven't heard early versions of songs.” 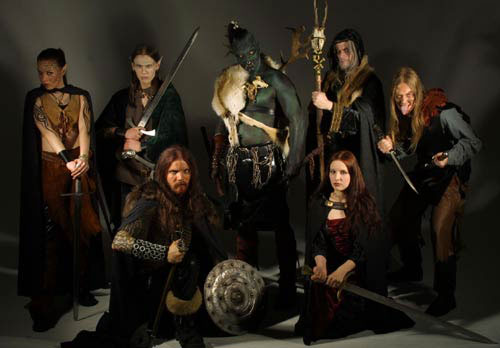 How can one imagine a show of Battlelore – are you playing onstage with the same masks as on the promo photos?

„Of course we wear all the medieval clothes and use the background banners and masks etc. We are trying to add some special effects to every show, of course it is not possible all the time. A live show should be a performance not just a played gig. We have much to do right now concerning live shows and we have not arranged any gigs at the moment. Need to wait a response of `...Where The Shadows Lie` and ready up to gigs.”

What is the meaning behind the album title „…Where The Shadows Lie”?

„Well it is taken from the Tolkien's poem of Rings. We thought a long time what could describe our album the most and what would fit in the theme. `Where The Shadows Lie` is a short and appropriate presentation of Land of Mordor where the evil inhabitants are consuming and turning all the resources to dust. The phrase gives two different point of views, the good and evil. As our songs on the album are not just evil or good. And hopefully it leaves some thoughts to listener.”

What is main-concept or theme on „…Where The Shadows Lie” - Tolkien inspired material only?

„Yes, it is totally Tolkien inspired material. Most of us are researching Tolkien's work of Middle-earth and that´s why it influences to all we do. Tolkien have made possible to get infinite ideas from Middle-earth and it is easy to get inspirations to our songs from it. We have been asked would we change our concept to any another source, like Dragonlance. The answer is and will be big no. Tolkien has affected us so deeply that we won't trade it to anything.”

Which dark feelings you mainly try to reflect with your music?

„That is a tough question. There is many feelings we try to wake on listeners. Feelings more like waiting for a battle when you are eye an eye with your enemy, resting after the long journey etc. if you know what i mean. Feelings with images and states of mind. And elven songs are of course a way far from ripping of Orc heads.” 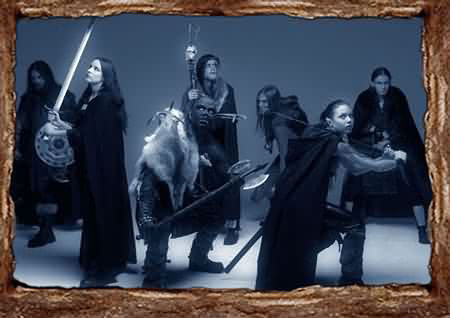 Why do you play this style of Metal?

„It sounds like Battlelore should sound. I think Battlelore can't be bound to a particular style cause we try to do as rich music as we can in the limits of course. Songs which differs too much compared to other songs are considered as out of line. Some may found five different styles on our songs, but still I can say our songs are consistent in the whole album. And there have to be few surprises to slap the listeners face. The main point in our songs is to woke up feelings. If a listener get feelings I can say we have reached our goal.”

What is your personal definition for the style of Battlelore?

„As I earlier said we cannot be bound to a particular style. If someone wants to categorize us to the one or two tight boxes he can do that, we don't mind. The wide composition on our songs makes it too difficult to limit anything else but fantasy Metal. And if we would like to limit our songs to one style, the Battlelore wouldn't be the Battlelore anymore.”

How would you describe the members of the band?

„Our thoughts are similar. And I think this is the only thing which can be found as similar when compared us together. And in my opinion it is a strength, not a weakness. We all bring our own views to songs and that is what make it sound like it is. We have a good conversations of world situations, music tastes etc. but we never fight with others. Everyone of us are nice and kind persons and the most important everyone has a strong personality. We have fun and do what we all want to do, a good music and spread out ways to produce Tolkien‘s work to a normal people.”