In 1991 Norwegian Metal individualists Atrox released their first demo „Mind Shadow”. After this demo it took two other very hard to bear years for the second one to appear, „Dead Leaves”. And then, during the hot summer of 1994, three other tracks were recorded. It was after this that the band received finally an offer for a 7” EP from Danza Ipnotica and also an album from Head Not Found records.

Both the 7” EP „Silence The Echoes” and the debut album „Mesmerized” were released in April `97 and received good response from the press in Europe. And the outstanding Norwegians showed their listeners already in their early days of existence the very experimental, avantgardistic musical face of the band.

Years gone by… Atrox´ second album „Contentum” was recorded in April 1999 in Tico-Tico studios in Finland. This record was much appreciated by the press for it´s high originality, for Monika´s conspicuous singing and it´s challenging character. Now the time has come: Their third Album „Terrestrials” is even more exceptional than „Contentum”, and therefore certainly very interesting, and definitely not to forget: challenging. My questions were answered by their female singer Monika Edvardsen, which also plays the keyboards in Atrox. 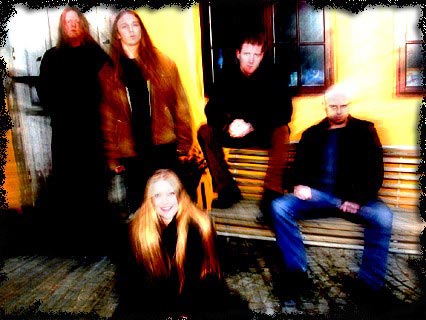 Hey Monika, which way the members of Atrox came together?

„None of the original members from when it started in 1988 are in the band any longer, but Eivind (guitars) has been in the band since 1990. So many members have come and gone over the years, so I’ll just mention the present line-up. Rune (guitars) was a friend of Eivind’s and joined in 1993, replacing Skei who went on to found Manes. I (Monika, Vocals & synth) met Rune in 1996 at a 3rd & The Mortal gig where I did some vocals and I joined Atrox shortly after. We headhunted Tor Arne (drums) when we needed a new drummer in 1999. We knew him only briefly at the time, but Eivind had actually asked him to join the band in 1993. He turned it down cause he’d heard some (false) rumours about Atrox being a bunch of junkies or something… haha! Daniel (bass) was a friend of ours; we met him when we played a gig with his former band, Embraced, and we asked him to join us when we left his band in 2001.”

Please give a short band history!

„Well, the founder members came together in 1988 to play Metallica covers under the moniker Fatalica. It was just for fun, I guess, but later that year they took the name Suffocation and began to make their own music, Death Metal at that time. The name was changed to Atrox in 1990 and the band recorded three demos before signing a record deal in 1996. We released a 7”, `Silence The Echoes` on Danza Ipnotica and a CD, `Mesmerised` on Head Not Found, both in 1997. Four band members left and one joined before we recorded `Contentum` in 1999 and released it in 2000. We recorded `Terrestrials` a year ago and it was released a couple of days ago.”

Which were your early idols in the Metal area? Which ones of them have influenced Atrox?

„My faves were Dokken, Tesla, Whitesnake and Yngwie Malmsteen, but I can’t say they have any influence on the band, hehe! Eivind liked Kiss, Black Sabbath, W.A.S.P., Metallica etc and I guess you can detect some influences of them. Tor Arne likes to listen to Anthrax before recording sessions… For our 1st recordings I guess Rune and Eivind were pretty influenced by Anathema.”

What is your definite goal with Atrox?

„It’s simply to be creative and play the music we like and spread it to others who likes it as well. It would of course be cool to become a bit `bigger` but if that means we have to make compromises and hold back good ideas, we’ll definitely prefer to stay as we are.” In which mood you write mostly the songs for Atrox? “All kinds of moods, cause it happens over quite some time, home and at rehearsal. Also we are three persons who make riffs/themes and put them together, so I guess the only thing I can call a common mood is a `creative mood` if anything. It’s not like you have to `feel blue` to write lyrics or music. It’s actually really difficult to write anything at all when depressed; it’s more like, you start working on something and it affects your mood and brings forth new ideas.”

Which inner feeling do you try to reflect with your music?

„Mixed, shifting, contradicted emotions and the confusion/understanding it creates. Emotions common for all humans; fear, euphoria, sorrow, some kind of madness etc... The passion for the music itself, the passion for creativity, for expanding the horizon, pride and contentment with being a part of this band. Making new vocal lines often feels being a kid in a candy store where I can have anything I want! It’s kind of magic…”

„Atrox is Latin and means terrible, cruel, repulsive and so on. I guess it doesn’t really fit the music we make now, but it did in the old days. To me it’s just a name, like Monika is my name and I don’t care about the actual meaning, neither should anyone else!”

What does the title of the actual album mean?

„`Terrestrials` means earthling, any creature living on the earth. The thoughts behind it… well, I’m more used to hear the word `extra-terrestrial` than `terrestrial` so to call the album `Terrestrials` is for me to put focus on something taken for granted. The thought that all living creatures on earth have something in common gives a different, funny perspective on the world. Also I think of the creatures in the lyrics and on the cover as terrestrials even if they are just figments of my mind cause they live on the earth in my mind.”

Please explain the main concept behind the new songs!

„The lyrics are usually introspective, often trying to view issues from more than one perspective. My vision of the songs is that they go through some kind of metamorphosis on the way and that there are different kinds of contrasts in the combinations of themes so that the 1st theme might seem different in retrospective when you listen to the last theme. I mean to evoke mixed emotions, to make the listener aware of how contradictory the inner self can be. Heaven knows if I succeed, seems like it provokes and upsets many people!”

Be so kind and explain the readers the songs of your new release.

„`Lay` – One should stop avoiding one’s issues and deal with them before they ruin everything. A reminder of one’s responsibility for one’s own life; `Ruin` –The theme is: seemingly lifeless objects are somewhat alive. It’s a description of a vision I had, but the dead/alive theme is also something I apply to the mind; how you sometimes can see yourself as some kind of zombie; `Mare’s Nest` – Love and hate as two sides of the same thing. Something that seemed so fantastic turns out to be worthless, but you remain trapped between positive and negative emotions; `Nine Wishes` –Wishes for visions and fantasies to embody and become real. And they almost do!; `Human Inventions` –One person can be both a victim and… a bastard. The way we perceive others and ourselves is our own `invention` and we are `inventions` too; `Mental Nomads` –The mind is constantly changing, we’re all crazy from time to time; `Changeling` –Very depressive stuff… fear, alienation, loss of identity and self respect, no hope, no future…; `The Beldam Of The Bedlam` –A vision I had… Like a short movie about a group of bedlamites where you’re not sure whether the main character is sane or not; `Translunaria` –A song to the moon or just some loner too proud to accept help or comfort. Translunaria is a state on the side of the moon we can’t see from earth, but since the moon revolves, this state is always moving; `Look Further` –Describes a vision I had of a disgusting, dough-like creature that changes shape and expands and grow new body parts all the time. It’s so disgusting that I can’t find words and use sounds instead. The 1st part is meant to make the listener a bit nauseous!”

Which were (and still are) the inspirations for the music of Atrox?

„Tor Arne says he’s inspired by Rocky III, hehehe! Well, movies like `Hellraiser` or `The City Of The Lost Children` can be inspiring, as can shortstories by Franz Kafka or H.P. Lovecraft, poems by Don Domanski, cartoons and pictorial art – I like Klimt, Schiele, Giger, Kollwitz, Munch, Bosch and many more. For me making music, writing lyrics and painting intertwine and work as inspirations for each others.”

„No, nothing. We’ve been asked to play somewhere in our hometown, but it won’t happen. Unless the others can find a stand-in for me… I didn’t have stage fright at all some years ago, but it gets worse and worse and I think I might die of fear if I enter a stage now! Besides that, Rune has moved to Sweden so it’s not all that easy to plan a gig and have enough time to rehearse and stuff like that.”

Noteworthy plans for the future?

„We’re leaving Season of Mist as we have already signed a deal with the Italian label code666 (the label Aghora is signed on) who’s actually very much into Atrox, and that’s quite different from our situation with Season of Mist who’s giving us a hard time for not being commercial. Code666 is smaller than Season Of Mist and the studio budget will be lower, but I don’t think it will be a problem – we’ll use a studio we can use 24 hours a day if we want to. In Tico Tico Studio we had only 8 hours a day at disposal. We’ll record our next album in August/September and hopefully it won’t take very long time before it’s out…”