The so called „Mediterranean Metal scene“ has been formed at the beginning of the ´90s from bands like Nadur, LiotruM, 3, Fantasima, Faidda, Jafà, Sateo and others. During these years the scene had some changes.

What the „Mediterranean-Scene” means? It´s a bunch of bands coming out from the hot area of Sciacca, a town near Agrigento in Sicily, Italy and linked to Agghiastru or Astru as well, the great mastermind of the „Scene“.

The common point of these guys consists on trying to make music creating something new instead of certain easy emulation. The bands of the Mediterranean scene usually use the ancient Sicilian dialect and English language, to telling arcane legends about the Mediterranean area. This makes everything fascinating and gives a strong emotional impact. Astimi represent the most extreme side of these Mediterranean scene, its been formed by Astru as vocalist, guitarist and drummer, 3 as guitarist and synth player and Fantasima as bass player.

Astimi are ready to attack now with all their unholy powers. Their own massive brutal Death Metal sound is the vein of Deicide and Morbid Angel, but more extreme and blasphemous surrounded by the sick air of the burning Mediterranean area. 3, the fast and furious axeman within these hellish horde, reveals Metalmessage a few of the dark secrets behind Astimi. 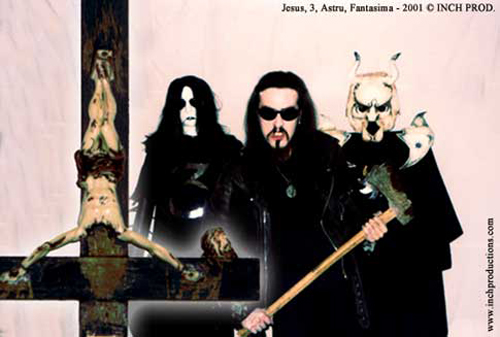 At the beginning, 3 looks a little back in the past of his band.

„The first line-up '97 was formed by Nadur – bass guitar, Sateo – guitar and vocals, and Agghiastru – drums, guitars and vocals. With this formation Astimi has released two demos 'Opus I' and 'Opus II' in 1997. Our music was near to black influences, but in 1999 me and Fantasima enter in the new Astimi line-up. So our sound be transformed, more blasphemous and extreme Death oriented. Now with this constant line-up Astru – drums, guitar and vocals, Fantasima – bass, and me, 3 – guitars and synth we have released a must of extreme music, our debut CD 'TrinaCapronuM'.”

The guitarist is proud about the new release:

„We have created a infernal extreme Death Metal attack, our fans are very satisfied with the result...” What does the bands name mean?

„`Astimi` is an Sicilian word for 'Curses' or 'Imprecations'. Its sound is very acid, and represent our hate for the Christian's germ!”

What does the title of the new album mean for the band?

„'TrinaCapronuM' is the ancient and mythological name of my island. We tell about it and its anti-Christian legends.” 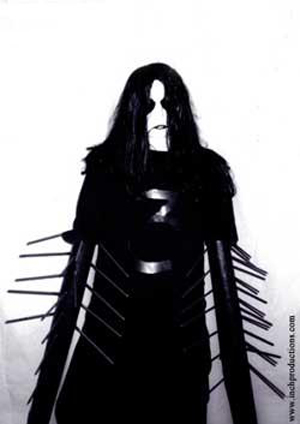 What is the main-concept or theme behind the new album?

„All lyrics are anti-Christian and Satanic, but we tell any important themes also. This themes are: abortion, euthanasia, scientific research, Sex, Aids and more. We tell of all this themes from a non-religious position. The church will be ever against this subjects their want that all humanity be ignorance, their want our downfall. In 'Satanet' we tell of Internet as important media for our rebellion against the slavery religious.”

Please tell us about the mentioned ancient Sicilian dialect, which have found it‘s place in Astimi.

„In 'TrinaCapronuM' we sing in dialect and also in English language because we wanted more international lyrics for our fans. When we tell of the Mediterranean legends we rather sing our arcane and ancient Sicilian dialect. It's better for the atmospheres.”

Where has been the new album produced and how long took the work for the production?

„'TrinaCapronuM' has been recorded at the Castiu Studios of our bandleader Agghiastru. He is also a excellent producer. Our sound is very brutal and near to the great Morrisound productions... We and also all our fans are very satisfied with the end result.“

How long has it been last to compose all the songs on the album?

„Few weeks because we were very absorbed in the 'TrinaCapronuM' songwriting. All our hate for the Christian germ were there, on our instruments.”

Who has composed the most tracks for the new album? Does a main-composer exist?

„Astru is our main-composer. He has 666 fucking ideas every day, and for us all its very difficult to follow his fucking head.”

And who writes the lyrics in the band?

„We all together talk about the main themes before the writing of the lyrics, and after that all together are writing the lines.”

What is your definition for the style of your music?

„Evil brutal Death Metal, or extreme evil music... Most important for us is it, to have a anti-Christian and Satanic attitude.” 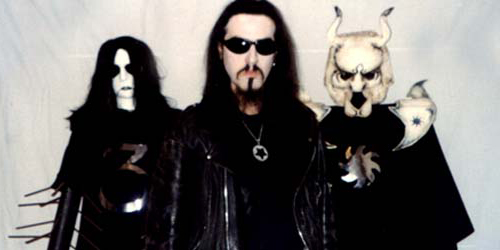 Please be so kind and explain all the songs on „TrinaCapronuM” with your own and special words!

„Well, 'TrinaCapronuM' is telling about a ancient kingdom. It's a mythological name of our pagan island. In 'Holy Abortion' we told of a important moral problem. Every woman must to deceive the abortion with your head, none must interpose. 'International Satanic' is a invitation for join us against all religions. 'Satanet' tells of the internet, a great communication system. With internet we can aspire to the freedom from the Christian slavery. 'Erodes Hand' is a call to the extreme rebellion against Christ and his law. We will not mistake as Erode. 'Stigmata' tells about the stupid visions of the Christians. Their believe to the miracle – for me is it mentally ill. This song is very brutal and atmospheric. 'Odiu' is a old track from the first 'Opus I' demo. The new version is very extreme, it represents all our immense hate for god. 'Astiu' is a very fast song. In this song we sing in our dialect and in English language. The last song of 'TrinaCapronuM', 'Shame', is a riff of 'Viogna' (Inchiuvatu album). We have created a new song from our special guest in that album and the result is very bizarre and brutal. 'TrinaCapronuM' is an album, which is brutal, technical, fast and blasphemous – music for all sons of Satan on this world.”

Live-gigs - when the world gonna see you with the band playing on stages?

And any plans for the future?

„In a one year we realize a new album, more brutal and technical. Now 'TrinaCapronuM' is the best extreme album of the whole Mediterranean Scene. If you can't find our CDs in stores, demand them to order it! Otherwise, order it directly from us at www.inchproductions.com the official website of the Mediterranean Scene.”