Ásmegin offering their exciting fighter hymns however with a due portion of self-confident self-sufficiency and many perfectly seizing forest dwarf choirs. A first hearing sample of their new debut album „Hin Vordende Sod & Sø” shifted me rapidly into a sheer raptured rage of listening. Recovered from it, I felt Ásmegin bard Bjørn Olav Holter on his aggressively showed front teeth immediately. 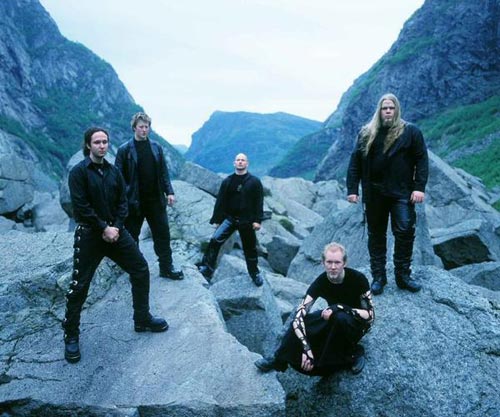 Hey Bjørn, how is the feeling within the band these days?

„Everything is ok, we have spent some time considering contracts, and now that we have decided, we will soon be back in business with rehearsing and song-arranging, most of the ideas are already finished. During the time we spent in studio we didn’t rehearse very much together, but now we are done and ready to take over the world. I think the work in studio was what the band needed to feel the belonging and companyship that a band should have.”

When Ásmegin has been founded?

„It started off in 1998 with as a Viking Metal band with Auðrvinr Sigurdsson, Iving Mundilfarne and Marius, who is the only original member left. A lot has happened since then, and we are a completely different band now.”

What has your band name to mean?

„‘Ásmegin’ is Norse and can either be translated as asatro or the ethereal powers of the ancient Norse gods. We have got a pretty good status trough that name, so we chose to keep it in spite that it has little to do with our music now.”

How has developed your unique style?

„In ’98 it started of as Viking Metal, as I said, though it seemed that as soon as new members popped up they carried their own style with themselves, and then at one point we kind of grew out of that style and put the atmosphere and lyrical concepts into the medieval Norwegian folklore instead. Along the way while we were rehearsing the songs, we kept discovering places where instruments as fiddles, flutes and some of the other sounds included on the album could fit in. Marius seemed very talented at working in studio with new instruments and fitting it into the music. Very much of the sound has developed in studio, and the outcome has been a lot better than what we dared to expect when we first went into the studio a year ago. When Thunderfuck (Tommy) joined the band as a drummer, he put a lot more groove into the style, and as I joined in the energy got a slight boost. We have changed from the black style we used to have into a more groovy extreme Metal.” 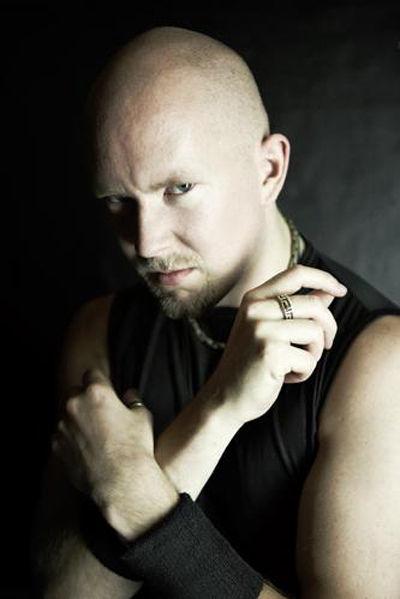 „Not particularly, I’m sorry to say.”

Which musical conception does exist behind the new album?

„Well, it seems that since the songs have been made over so many years, they include both the Viking-style we used to have and our new folklore-inspired tunes. The variety of the album is quite extreme, and it makes the album very complete in itself.”

Which were the actual inspirations for the music of Ásmegin?

„It seems that almost everyone in the band has different musical inspirations, which makes the style quite original. Old reviews have gone so far that they say we are at the brink of starting a ‘new wave’. In the creative workings Marius usually does the rough ideas in making the songs and the lyrics, and then we finish them in the rehearsal-room to perfect them.”

What is the meaning of the title of the new collection of songs?

„‘Hin Vordende Sodd & Sø‘ could be translatet into something like ‘the prospective soup and broth‘. It tells a bit about the variety of the album, and one can also draw a line to the song ‘Rondafolkets Herskab‘ in the album. Roughly, the main character is about to get cooked by trolls in the hall of the Mountain King.”

Which lyrical conception does exist on these new album?

„The songs are, as the music, of great variety. There is amongst other two trilogies, the Valgalder-trilogy and the `Peer Gynt`-Trilogy, which is based upon a play by the well known Norwegian author Henrik Ibsen.”

Be so kind and explain the lyrics of a few songs with your own words!

„Most of the stories are illustrative and atmospheric stories put into lyrical pieces. ‘Op af Bisterlitiern’ (which I worked with Marius on) is a spooky story about dark creatures who crawl out from a pond somewhere in the forest, and where a traveller meets his end by the hand of these little fuckers.” 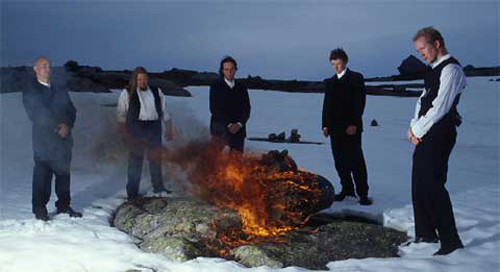 What is your definite goal with your music?

„First of all, we want both the listeners and ourselves to have a good time making and listening to our music. Personal I really enjoy having good contact with the fans and talking to them on a personal level to hear how they experience the music.”

How gets the collaboration with Napalm Records so far?

„Still we have left to send the signed contract back to Napalm Records, but the owner Max seems eager for the whole thing, and we are hopefully looking forward on a long, productive and joyful cooperation.”

Which bands do you listen to nowadays?

„I can only answer for myself, and I can mention bands like Blackmore’s Night, The 3rd And The Mortal, Tidfall, Død/Hest and Devil Doll. Quite a mixture of different styles, in other words.”

How looks a live show of Ásmegin? Somehow medieval styled?