Michael Stenberg (guitars & backing vocals), Björn Luna (bass & backing vocals), Ronny Kaasa (drums) and Kenneth Brastad (lead & backing vocals) are Ashes To Ashes. The band was formed in 1992. They are coming from Oslo and their new album „Cardinal VII“ is the mighty follow-up to the self financed debut album „Shapes Of Spirit“, released in 1999.

The unique music of Ashes To Ashes is an mainly very innovative and diverse blend of musical elements and include everything from classical music to Doom-, Power- and Heavy Metal, with a strong focus and feel of the epic, atmosphere and haunting melodies. 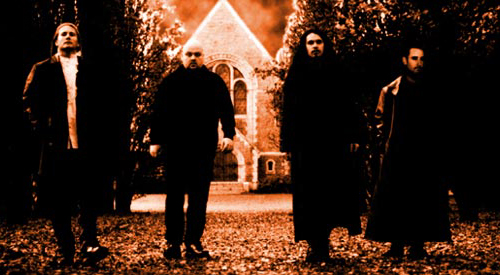 Ashes to Ashes had definately found their own identity as a band. My questions were answered by Bjorn Luna, Kenneth Brastad and Michael Stenberg.

„Cardinal VII” got many overwhelming critics so far, my review included! What´s your own point of view over the new album with a little distance to the finishing of the studio work?

Kenneth Brastad: „I believe that `Cardinal VII` represent something like: `The becoming of Ashes to Ashes`. I am very proud of this album and probably will be forever. There are a few things that I wish we had done differently, but that`s just because we have grown as musicians since we recorded it.”

Björn Luna: „All the songs are very strong, and are resistant to the tide. It’s been a year since we recorded it, and it took a year to make. We’ve been playing the songs live and rehearsed a lot. And I never get tired. I still get the right feeling, and some parts can still send shivers down my spine. That proves the survivalness of the songs.”

Often times during the running of your new album I felt a very strong connection of your music to the mighty works of Swedish Power Metal heroes Morgana Lefay – do you agree in this?

Michael Stenberg: „I haven’t heard anything by that band so I really can’t say.”

Which one of you guys had the great idea, to blend those well dosed mystic gregorian monk choirs with highly atmospheric Doom Metal?

Kenneth Brastad: „Michael had a certain vision on how `Cardinal VII` were supposed to sound like before we entered the studio, so he have to take the credit for that.”

When you look back upon the last times, how do you see your first done compositions?

Kenneth Brastad: „Everything on the new album is much more mature than the songs on `Shapes Of Spirits`. The album had songs like `Gabriel`, `Castle In The Air` and `The Mourning` that I still think highly of.”

Michael Stenberg: „I still love the song on `Shapes Of Spirits` but as Kenneth said, our sound is more mature now.”

Can you see any musical connections with the later compositions of Ashes To Ashes?

Kenneth Brastad: „Michael’s desire to write good songs and beautiful melodies are present already in the early compositions. He has his own way of writing music so there will always be a connection between old and new material.” 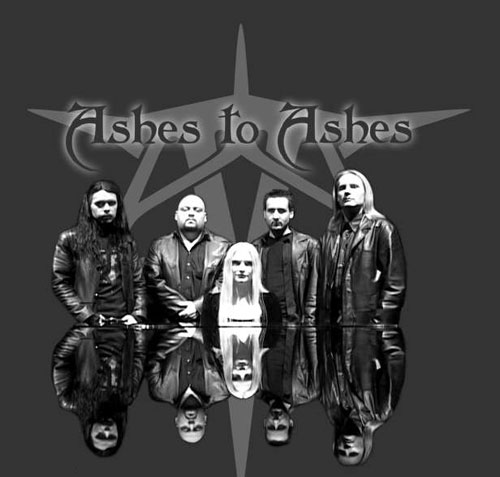 How were the responses to your first album?

Kenneth Brastad: „We received great reviews all over.”

Björn Luna: „There are still people who asks for this album, almost every day. And right now we’re out of stock. I would indeed look gladly on a proposal to make a complete re-print of the album, with good distribution. The album is still strong musically, and a lot of people cherish it.”

How many copies of „Shapes Of Spirits” were sold?

Michael Stenberg: „I don’t have the exact figures but we recently ran out of the fourth pressing so that means over 3.000 copies.”

Were you satisfied with the promotion results of this album?

Michael Stenberg: „We did everything ourselves. There’s not so much more we could do. I mean, we didn’t have any label behind us. Anyway, we managed to spread the word and the music and we got a deal with DVS Records. I’m pretty satisfied by what we accomplished on a limited budget.”

What do you guys think about your older lyrics now?

Björn Luna: „For me, the recipe of making lyrics has always been the same. I think I pretty much worked in the same way before as I do today. So the words on `Shapes Of Spirits` don’t stand back for what I did on `Cardinal VII`. Actually I’m a bit proud of the older lyrics. But for the next album, I will try to focus even harder on making nice twists and surprises. I like the idea of a sentence in the end, that turns the whole story around.”

Michael Stenberg: „We did the best we could. As with everything when you look back on things, there will always be something that you want to change/improve when looking back. I’m pretty satisified.”

Which specific influences have been floated in the new music?

Michael Stenberg: „There are no specific influences in our music.”

Which specific influences have been floated in the new lyrics?

Björn Luna: „Influences to write lyrics is in fact a mystery to me. It can come from all sorts of things, and at very strange times. For instance, one time I woke up one morning and a sentence just stood all clear in my head. I had to write it down immediately, before it drifted away. If I remember correctly it was the line from `Embraced In Black` going like this: `Steering with empty orbits at the sinister deed`.”

Michael Stenberg: „The theme is the seven deadly sins but we’ve definitely done it our way and not gone by the book or anything.”

Who wrote the lyrics for the new album?

Björn Luna: „I took care of `New World Obscure`, `Embraced In Black`, `Truth On Scaffold` and `Among Mortals`. The last mentioned is more like a short narration, a statement. Michael did `Sic Transit Gloria Mundi`, `Behind Closed Eyes` and `Cardinal VII`. It’s basically been like this. That Michael and I are sharing this task. We’re helping each other out on the arrangements. You know, the right ending here and a more suitable word there. So Michael has done some additional words and sentences on my songs.”

Björn Luna: „I’m in favour of not revealing too much of what I’m writing about. You know, to let the listener have their own interpretations. However, the main contents, in short, would be: War / Battles, Murder / Fraud, Religion / Beliefs.”

Michael Stenberg: „Many of our lyrics opens up for different interpretations. This is something we will continue doing.”

Michael Stenberg: „Well, lyrically the album is loosely based around the seven cardinal sins so the title came quite naturally.”

What does the picture on the frontcover art of „Cardinal VII” mean?

Michael Stenberg: „It doesn’t mean anything specific. It can be THE cardinal seven itself.., someone waiting in the wings..., what you want it to be.”

Michael Stenberg: „The artwork for the front (and the rest of the booklet) was done by Bjorn Torbo, Prontographics. I came up with the idea for the “cardinal” on the front and Torbo did the rest.”

DVS Records – how did you get into contact with them?

Michael Stenberg: „They contacted us after they had heard `Shapes Of Spirits`. We kept in touch and after some months we sent them a 3-track demo for `Cardinal VII`. We agreed on a deal pretty quickly thereafter.”

Are you satisfied with DVS Records so far?

Kenneth Brastad: „DVS do the best they can. It`s a relatively new label so they are still in the learning process, but they are getting there. One of the best things about DVS is that everything is much more personal than business. It makes the dialogue more easy than with the bigger labels.”

Dark and gone medieval times, cloisters and monks – is there anything special interesting from this era for you?

Michael Stenberg: „The ability to cherish and produce art on a whole other level for one. I love everything that has to do with medieval times, the middle ages, baroque... the lot.”

What kind of music do Ashes To Ashes members listen to at home?

Michael Stenberg: „Anything with a melody. One day Enya, the other Albinoni, the third Kiss, the fourth Molly Hatchet, the fifth Iron Maiden… or everything on the same day. I could go on and on really.”

What does the name of your band mean?

Michael Stenberg: „It doesn’t mean much more than the famous lines. The name suits us well don’t you think?”

How often a week you do rehearse?

Michael, listening to the way you play, I can tell that you are not a beginner. How long are you playing the guitar? Do you look up to some famous guitar players?”

Michael Stenberg: „I’ve been playing on a regular basis for about 12-13 years. I don’t look up to anyone. For me it has always been about the songs, not how fast I could go from A to B. I have to say that there are some guitar players which for one reason or the other I’ve particularly enjoyed through the years: Ritchie Blackmore, Yngwie Malmsteen, Ace Frehley, Dave Meniketti, Angus Young, Dann Huff, Vinnie Moore, Michael Romeo, Warren De Martini, Ronni Le Tekro, Wolf Hoffmann and the dual attacks of Tipton/Downing, Smith/Murray, Moody/Marsden, Hlubek/Roland.”

Kenneth Brastad: „Absolutely! It`s much more personal than a CD.”

Please say some words to the fans!

Michael Stenberg: „This is something I always say; keep on supporting honest music. And thanks to you Markus, for spreading the word.”