These Russians around outstanding female singer, composer and lyricist Masha ,Scream‘ Arhipova praise the ancient Slavonic gods under the banner of great music since the beginning of 2002.

Risen out of the centre of a local pagan community, Masha and Alexander „Warlock“ Korolyov collected their spiritual powers to form an own Pagan Folk Metal band. Formerly known as Hyperborea, later the strong horde carried on as Arkona.

And with their new fourth studio-album masterpiece „Ot Serdca K Nebu“, translated: „From The Heart To The Sky“, the awesome Arkona took my heart again by storm. These new disc is massive filled with mighty guitar-storms, pounding drum-assaults, charming ethnic- and folklore instrumentations of the highest epical presentation, exciting choir-arrangements and mostly with hypnotic noble melodies!

With the participation of the singers of Byelorussian folk chore Arkona’s songs get real might. Within thrones Masha as usual high with her partly absolute unbelievable variable voice arts, which guarantee lots of breathtaking listening experiences. Therefore I was not able to resist a second and spoke with Masha over the magnificent current silver god-discus „Ot Serdca K Nebu“.

Hello Masha! How’s it going for you there in mighty country Russia currently?

„Each of us is the patriot of the Native land. We appreciate and protect our fatherland as much as it is possible for us. Unfortunately, not all is god here with financial and the political point of view, but we used to live in such conditions, and nobody pays attention to the situation in Russia and we live usual daily life.“

And, how do you spend your daily life there?

„Everybody in the band has a job, which take the main part of life, except Arkona. The rest of the time we try to spend in rehearsals, at concerts and everything that concerns our band. Also, other guys, except me, besides Arkona have a band, Rossomahar, which has been a little forgotten, because of the great creative activity in Arkona, but now, we recorded the album and finished tour and I think, guys will give all free time to creative activity in Rossomahar.“ Have you been very busy lately with the work on a new album?

„O, yes! It was difficult and long work. We put much effort and time in this album. First, during one year I wrote tracks for it. After this was over 6 months of rehearsals and at last we recorded the material. And it was published in the end of fall of 2007. In honor of it we played a great album release concert in Moscow. We made areal show and filmed a DVD. It requires revision and montage but in the near future it will be published.“

Are you satisfied completely with it so far?

„Yes, of course! I think that "Ot Serdsa K Nebu" is our best recording yet. It is a really long-awaited result for me. We tried to achieve it for a long time. Sergey, our guitar-player and sound producer, made the impossible when he composed great number of instruments and a lot of voice tracks in the fantastic sound. In short, this album made my dream a reality. I am at a deadlock, because I don't know what I have to write next to make something better than this.“

Which one is still your main focus in your music?

„I can't say exactly. By the way, I don't understand how to focus the attention on something in creating whole music? Everything has to be unified. In creating the first of all I think about melody, after it I select an arrangement. Seldom, I can take the guitar and contrive a riff, right now transfer it in midi and select an arrangement and melody. But in most cases all is coming inside my mind.“

What can you tell me about the band-chemistry between the involved ones currently? Line-Up news?

„The relations inside our band are perfect right now and always have been that way. Sometimes little discords happen, but all time we can make a compromise.“

How good have been the worldwide press feedbacks for your last album so far?

„There are a lot of opinions. Most people think that this album is the best of all Arkona's works. Some people don't like it and generally prefer our earlier works, which have simple nature – for example our first CD "Vozrozhdenie".“ Which will be the main differences from the current Arkona album to the following album?

„All Arkona albums are different musicly, atmospherically and generally sounding. These two albums have absolutely different nature. CD "Vo Slavu Velikim" is more folklore but the new album is more epic and dark. There are a lot of slow folklore songs, more black metal style. This CD is amazing by style difference. There are no songs in the manner of old Arkona like "Vijdu Ya Na Volyushku" or "Maslenitsa", but in the same time it has such hits like "Slavsya Rus'" and "Ot Serdca K Nebu". It closely resembles old material, but very little.“

At the time, which topics inspired and/or motivated you for the new album? Russian Writers? Russian visual artists? Russian movies?

„There is a song on the CD "Vo Slavu Velikim" which I wrote after looking the Russian film "Rus' Iznachalnaya". This song has the same name and content. When I wrote "Ot Serdsa K Nebu" I hadn't such thing, all sings are based on my worldview and ideology.“

What to you is most inspiring in native Russian nature?

„Russian nature is individual. It fills my soul with purity, which belongs only to her. It inspires me to fight for its freedom and independence.“

Please tell the readers the lyrical content of the newest Arkona tracks!

„Most of the songs are consecrated on rebirth of bygone traditions, returning to past, but there be songs with another contents. For example, the first track "Pokrovi Nebesnogo Startsa" is about a dying warrior who lies at the battlefield and asks Veles to take him quickly in to the world of the dead which we called Nav'. There are some songs here , which consecrate on defining gods. For example: "Kupala" and "Sva". The ballade "Oj, Pechal'-Toska" is about miserable girl who loved married guy. She was pregnant and in the end she drowns herself.“

Here s a loaded question. How do you feel about Christianity? Many in black and pagan metal write anti-Christian music but never take it past that. Do you still live and breathing Pagan metal every day there?

„Of course! My worldview is at the head of all position of life; I'm fond of it. My worldview and my attitude consist in my properly native religion. Christianity is an alien to me. It's not ours. This religion came from far away and takes hold of our earth by brute force and blood. This is other's doctrine. It throws dust in people's eyes, instructs them concept of "slave". But how can we be slaves? Our own rules talk about freedom, which was robed. I try with all my might to return all that was lost many years ago.“ If society crumbled today, what type of civilization would you like to see replace it?

„Now a day the civilization achieves such level, that modern person can't live without it. The cars, the lifts, the computers ?C are the necessary part of existence. People start to make living at the earth easier from the beginning. If our ancestry could develop cars, I think they would use them, and if they could use the kitchen-range they would not use the bonfire for the cooking. It is economically. That's why I don't want to see the destruction of our society. Let all be like it is.“

„Of course I think so. All things at our planet have two faces ?C black and white. So the day is opposite to the night, the living is opposite for dying, even if take a look to the sky you can see, that moon is opposite for the sun! The world holds onto it. In our mythology all worldwide opposites are united by perpetual battle of two gods: Belobog and Chernobog. And until they are fighting at the earth will be the balance between this opposite, so, if one of then wins the end of the world will come. So, the opposite for any philosophy, independently of that it is the religion or somebody's ideology.“

„It's difficult to say, all will come suddenly and naturally. We have a lot of wishes but there is no confidence that all this will came true. In any case we try to go up-stream and gods will help us. Only they know what is waiting for us in the future.“ 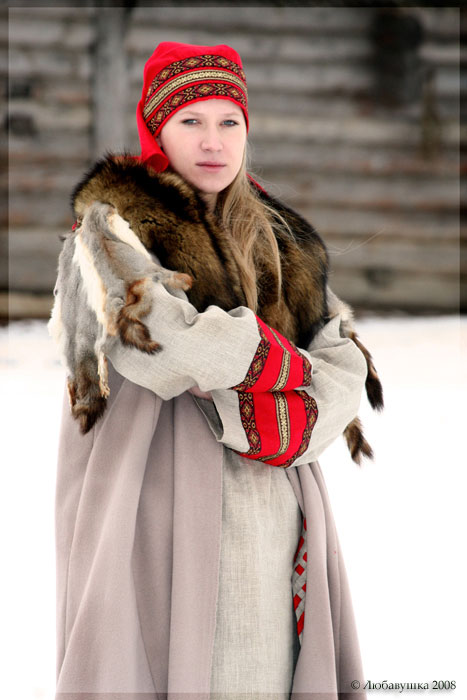 Masha, please tell me about your spiritual beliefs and strong heathenish concerns!

„Our ideology is particularly individual. I am rodnover, it's a name of my "pagan" ideology, but we don't admit the word "pagan" because it's not right. "Pagan" means person who has another religion. So for Christians we are pagan, and for us they are pagan. But we are Rodnovery. Rodnoverie include the great pantheon of gods as it takes a lot of time and patience to list them. There are the lows of Prav', we live with them. They are the main principles of our ideology. If somebody wants to know more about our living, he can read some special literature about the ancient Slavs.“

„In present time I love my family and my work, which has to be continued in the nearest time.“

„To quarrel with close people and to dispute about things which are holy for me.“

Live appearances of Arkona: which one was the most successful gig?

„I can't say which concert was the best. We were in the many places of Russia, we visited Ukraine, Belarus, Slovakia, Czechia, Germany and everywhere good concerts were alternating with not so good ones. There are always some problems on the tour: sometimes with organization, sometimes with health, sometimes with something else. All of this can adversely affect concerts, but we always try to work with all our might, because people who come in to the show are not guilty in such problems.“

Worth to mention of Arkona's plans for the future?

„The next plans are creation of new material.“

„I wish you never stand still and go ahead independently of occurrence, Markus! Good luck! May the gods save you!“