Heavily influenced by the Finnish Metal scene, Annwn began in 2006 in Swansea, Wales, as a solo studio project of Aled Pashley a.k.a. Owain ap Arawn.

Shortly after releasing the first demo, „From The Highest Citadel“, Owain recruited a drummer and an additional guitarist. Over the next year keyboardists and bassists came and went as Annwn played their first live shows and recorded a new demo, simply titled „Annwn”. A permanent keyboardist was found during 2008.

Various musicians shared bass duties at live shows over the next few years, including Mark Wood of Manchester-based Black Metal band Winterfylleth and Peter „The Pendragon” Passingham of Shieldwall. 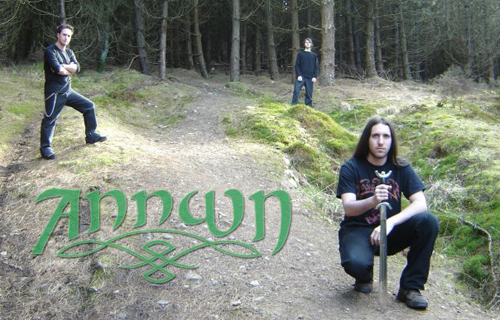 In the middle of August, Annwn released their „BOA '09 Promo“, which contains four tracks of pure British, heathen Folk Metal.

Hey Owain, how are you doing these days?

„I am very well thank you! Still catching up on sleep from the Gathering Of The Clans festival last week, but getting better slowly.“

What does the band's name Annwn mean?

„The name Annwn comes from Welsh mythology – it is the name of the Underworld, though should not be confused with Hell. Annwn was actually an island that existed far to West of Wales and was a place of eternal peace and happiness. I chose this name because I found it fitted the music I was writing at the time – I seem to be incapable of writing anything that sounds dark or moody and so this name seemed perfect! Being Welsh as well I of course found instant ties to its origins as well.“

Why do you play this kind of music?

„Folk Metal was something that grabbed me a number of years ago and has stuck with me ever since. I can't really describe or explain why I love it so much, but I do! Of course listening to Folk Metal all the time you hear ideas in your head for your own songs, so Annwn was born out of the need to write and record this material I could always hear swirling around in my head.“ 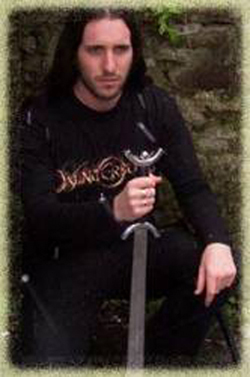 Which artistic ways do you still seeking with your music?

In which country Annwn do have their most fanatic fans?

„I think our largest fan base would probably be the UK in general simply because that is where we have played (at present) all of our gigs, but to be specific to fanatic fans, I would say Wales – as soon as a Welsh metal fan hears about a Welsh folk metal band they seem to instantly be drawn to them, even if they don't like folk metal. There is a massively amount of national pride here in Wales and as our population is not very large (about 3.7 million in all of Wales) anyone who is seen to be flying the Welsh flag usually gets support from anyone else Welsh!“

Please report a ´bit about usual songwriting processes for your songs!

„Up until now I have written and recorded all the Annwn material myself, as the band started out as just a one-man project. Recently we've been sharing some of the recording duties though I still do 100 % of the songwriting myself still. When it comes to writing a new song, I work in 2 ways – sometimes I will wait for inspiration to strike and then hurriedly try and write the song down before I forget it, and other times I will lock myself in my room and force myself to finish or even start a song I know I must work on – both seem effective in their own ways. I don't really have a specific style I stick to, I think I mainly just see what pops into my head and then work from there. Other times I may decide “I'd like to write a song that starts with a blastbeat” and then see what I can come up with, rather than waiting for any inspiration.“

Are the lyrics of Annwn oriented in philosophical ways? Or are they based in fantasy? 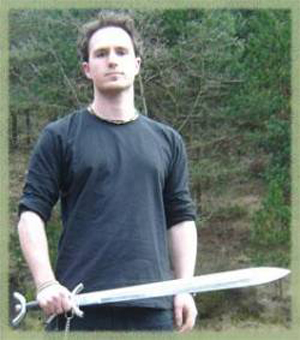 „Some of the older material I guess would be philosophical, but I think a lot of people missed the point of it as I think I made it a bit too subtle! One of our older songs, “Born Of Legends”, is actually about the spread of Christianity in Wales, but the lyrics seem very fantasy based on the surface so a lot of people just dismissed them as just that. More often that not, especially with the more recent songs, the lyrics are about the mythology and history of Wales – sometimes something more obvious (like the song “Black Bart” about the famous Welsh pirate of the same name) but sometimes a bit more obscure (like the songs “Mountain's Sunrise” and “Mountain's Farewell”, about an obscure Welsh folk tale of a prince who seeks advice from the giant who lives on the top of a well known mountain here in Wales).“

How do you practice your own relationship to historic topics mainly?

„As I mentioned in the previous question, I try and use as much Welsh history in our songs as I can as there are very few other bands in heavy metal that do this (the only other one I can think of is the other band I play in, Siluria). Wales has a very rich and unique history and I'd like to give more people the opportunity to find out more about it through our songs.“

What is the greatest fact within all your music for you?

„I think the fact I am most proud of so far with our music is that up until now I have written and recorded all the songs myself – about 25 over the past few years. There are many I have scrapped or decided to use at a later date which is why many of these have not been released yet!“

„I think my favourite Annwn song at the moment is “Mountain's Farewell” because the keyboards always seem to strike a chord with me (pun intended!). I'm also very happy with the lyrics on that song (rare for me) and its a fun song to play live.“ 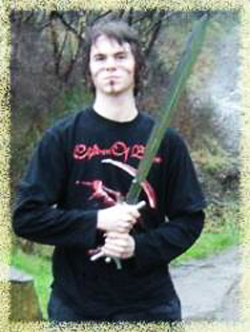 Please give examples of ideas you've had or implemented for your music. Tell me about your proudest achievement inside Annwn so far!

„The main ideas I've had really is to spread to history and culture of Wales within our music to people who might not usually have the chance to hear about it. Musically I don't really think we're doing anything too “out there” but then again I've always found it very hard to judge my own music and I'm sure there are lots of songwriters out there who would agree with me on that. As for a proudest achievement...I suppose playing our second ever gig with Finnish fantasy metal band Battlelore is something of an achievement!“

Which are your favourite bands and why? Who are your heroes among them?

„My 3 favourite bands are Death, Anacrusis and Forefather, though other favourites include Ensiferum, Moonsorrow, Summoning, Wintersun, Blind Guardian, Eternal Tears Of Sorrow, Lumsk and more. I look up a lot to Athelstan and Wulfstan from Forefather mainly because of their determination to just get their heads down into their music and never stop doing what they enjoy.“

„I'm really just looking to achieve the best balance I can with the music – to keep developing and progressing with each release but always trying to retain what I believe is our “core sound”. I'd be very happy if one day Annwn's music was recognisable instantly just from the style, much in the same way that a band like Forefather has, but we will see how that goes!“

Which are your personal plans for the future?

„Play music, travel, the usual! I will endeavour to keep Annwn going as long as is humanly possible because I really do love playing this type of music. Plenty of new things in the pipeline for us next year but you'll have to wait and see what!“