When she started in 1994 with The Gathering in the middle of the then bursting Gothic Metal wave, long years with the band were to follow, bringing a lot of attention, success and popularity.

In the meantime, the delicate young lady with the angel's voice has become an all-round mature woman who, artistically like few, looks far beyond the much-cited horizon.

As one of the few singers with such a broad field of activity, she continuously masters various stylistic splits with a completely convincing performance. On the occasion of her upcoming 25th anniversary, there could hardly be a better tribute for the Dutchwoman than the two concert evenings in May, which Anneke gave with a symphony orchestra, the Residentie Orkest The Hague.

„Symphonized” is the title of the new live album, for which eleven songs from the performances at 013 in Tilburg and Paard in The Hague were recorded. The album deliberately offers a broad cross-section of the versatile lady's work to date. 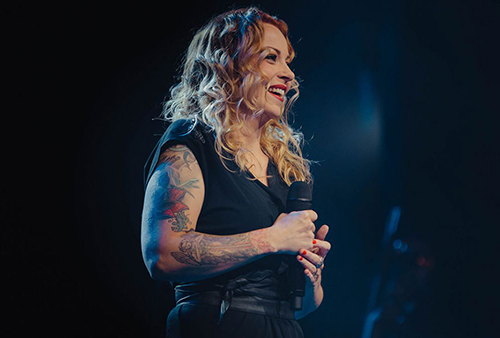 You on stage with the Residentie Orkest Den Haag - how did the idea for this very special event come about?

„The orchestra creates these events a few times a year. It is called Symphonic Junction. They invite a singer or solist from another genre, pop, jazz, etc. and then they create a wonderful, creative, musical evening together. They asked me for this as well, they wanted to challenge themselves, asking me to participate because of my rock and metal background. Of course I said yes immediately and wanted to put together a set with songs from my 25 year spanning career and it turned out to be an amazing two shows!“

How (nervous) did you feel the days and that 2 nights before you went to the boards?

„I was excited for sure. Not very nervous at all, we had everything under control, the songs turned out fantastic, I had such confidence in what was going to happen on stage.“

013 (Tilburg) und Paard (Den Haag) - are there mentionable differences to tell about the two evenings, in terms of the audience, the atmospheres, etc.?

„013 is a bigger venue with a bigger stage so that makes a little difference in atmosphere. Both nights were sold out so there was an energetic buzz and you can definitely hear that on the album. The audiences in both nights were loud and great!“

How did the rehearsals go with the orchestra?

„Very well, Most of the work is done separately, like arranging and re-learning the songs. The orchestra is rehearsing on their own for a period of time. We only did 2 rehearsals all together. The arrangers were present as well so we could really work out the details. It all comes together only a few days before the shows.“ 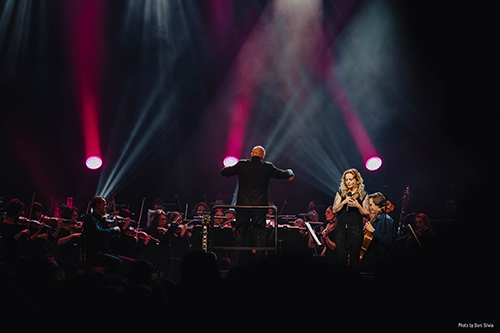 Performed were songs of Vuur, The Gentle Storm and The Gathering as also your own solo material - how did the song selection turn out and why did these compositions make it in the new release?

„I created a long list of songs from the last 25 years that I love the most and then I let the creative director, Sven Arne Tepl of the orchestra make a selection that he found appealing and suitable to arrange for an orchestra.“

What kind of emotions dominate these songs?

„Every song has its own emotion and feel to it. I believe the arrangements are unbelievably good in the sense that they capture the true essence of the songs.“

Were the live recordings still edited or left in the original?

„They are original indeed, we fixed some minor things, including erasing the loudly coughing sounds from people in the audience in the really silent parts of the songs.“

Please describe the main musical ‚character' of „Symphonized" with your very own words!

„This album and the songs are a celebration of the past 25 years. All these songs were transformed and magnified so we can re-live them in a very special way. I am so thrilled with it!“

What have been the most difficult passages in the production of „Symphonized“?

„We had no real issues or difficulties during the production of this album.“ 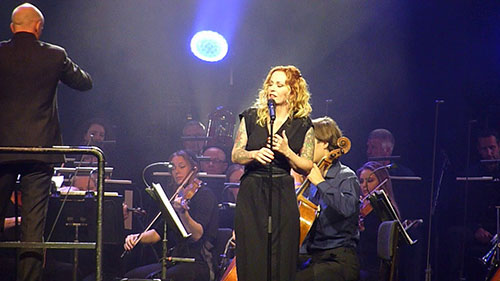 What is most important to you about this new live album?

„This is something really beautiful that helps me and the people who have been following our music for such a long time, look back and enjoy these songs in a whole new way.“

You’re an very active and motivated musician since the early 90s - did you ever expect to be such long on the ball?

„Yes and no. I always knew I belonged here in music and I work hard for it. I love singing and performing and all that comes with it. I couldn’t imagine 25 years ago though, that I would work with so many wonderful people and play for such a wonderful, loyal audience for al these years.“

Be so kind and describe your inner development as a personality, character and musician since your start in music scene.

„I grew and developed as a musician, a woman, a mother, a friend and as a wife. Music helps with the search within and with finding your own path and true meaning of life and love. One cannot live without the other for me.“

„I love music, I love singing, I love life! It keeps me going and I always go back to positivity and faith.“