This surprise was a complete success for them! With the new release „Cosmic World Mother“ the Finns suddenly catapult themselves back into the top ranks of the guild after an unusually long absence.

Symphonically sublime, epically moving Industrial Black Metal is still their passion and ...And Oceans make the long wait since the 2002 predecessor „Cypher“ really forgotten in no time. In the following a conversation with singer Mathias Lillmåns and guitarist Timo Kontio.

The first new album in 18 years - was was the reason to ‚return‘?

Timo: „Actually it has been a long time coming. For several reason it didn’t happen until now. One reason was that we were a bit afraid of how it would turn out. Would we be able to make …And Oceans worthy material again after so many years. Since the great times of the 90’s Black Metal etc. Maybe the idea for coming back has come when having a party of what ever and listening to some old stuff. Remembering how great everything was back then music, gigs etc. haha. Then after one successful rehearsal we kind of made the decision to at least try it. Then we got gig offers for a couple of come back gigs. They went so well that then the latest we decided that it would be great to make some new stuff as well and here we are, the 5th …And Oceans will be released after 18 years since the last one.“ 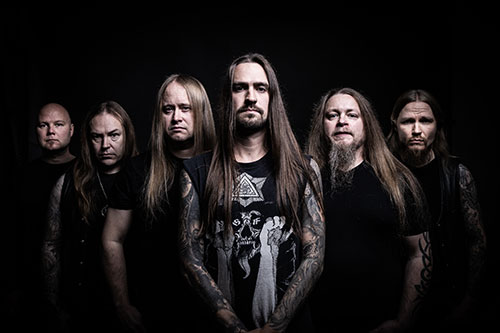 „… the six piece explores the transformations of physical and psychological energy.“ - seems to be a profound lyrical conception for the new output - or?

Mathias: „Well, I’ve been a non-religious person my entire life, so there’s some solace in the fact that energy is eternal. You can never loose energy, it just changes it’s form and we have always been a part of the all-cosmic energy and so we will remain.“

What do you think personally about the billions of ‚spiritual crippled‘ homo sapiens one on the planet?

Mathias: „Well… I think that the current situation in the world really speaks for itself. At some point the ‚Cosmic World Mother’ will fight back. It’s a horrendous time we are going through.“

„Vigilance And Atrophy“ f.e. sounds like earlier, fully majestic Emperor, I love it - how do you define the overall sound of „Cosmic World Mother“? Please describe the main musical character of the new release with your very own words!

Timo: „Thanks man! The initial thought was to explore the sound of the 90’s symphonic Black Metal. In my opinion the sound of …And Oceans or the music has always been a mix of good riffs and melodies. Being it guitar, keyboards or even vocals. Of course on this album some more contemporary sounds and elements were put into it.“

What is the most important for you on the new publication?

Timo: „Overall good songs along with the great package, meaning lyrics and graphics on the album inspired by them.“

It feels not less majestic & truly triumphal for me to listen to the new songs, a class of it’s own as always since the start - what kind of emotions dominates the new stuff?

Timo: „Thanks again. Difficult to say such thing of your own creation if you meant our emotions of it? There hasn’t gone enough time after the studio session. Time will tell. Of course one could say that this time around we have a bit more aggression in overall sound. Not missing the melancholy though which will be always the big element of our sound.“ 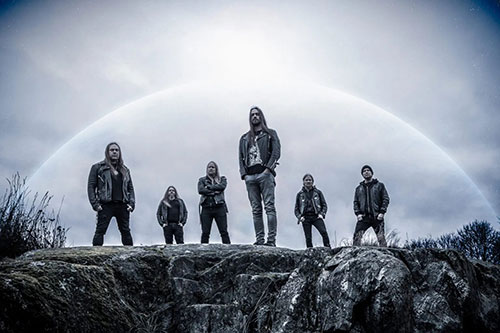 Timo: „I wrote quite a few of those tracks, but also other guitar player did a few. On this album our keyboard player came up with ready made songs with keyboards. I just made guitars on them. For example the title track is one of those tracks. Bass player did also a few riffs. We made riffs for more or less one year. They came surprisingly easy after all these years or maybe that is the one reason why they came so easy. Arrangements were made by the guitarists and the keyboard player. We had these demoing sessions somewhere where we recorded these riffs and made complete songs from them. At this point we still used the drum machine. Then listening them over and over again and thinking of arrangements. Then making adjustments if needed. Our drummer went through them then and made own arrangements if needed. Same for the bass player. Then after songs were more or less ready our new singer made lyrics and vocal arrangements.“

Mathias: „Yes, when I joined the band last autumn the songs were, more or less, ready except for vocals. I wrote and arranged the lyrics for the album in about a month. For two of the songs I actually brought in a friend of mine to do some words since I thought I was starting to repeat myself and needed some fresh input. He wrote the lyrics to two tracks on the album, but the vocal arrangements are all mine.“

What have been the hardest / most difficult passages of the songwriting-process?

Timo: „Maybe the arrangement part. Since we live so far away from each other so that testing this and that is not easy for the whole band or even guitarists and the drummer. That is why we had to have these special occasions where we made these demos and thought of arrangements together. For me it is not always that easy to make a complete song when playing only the guitar riffs. I need to test them with the drummer because drum patterns make so big difference in how the end material sounds.“

Allowed to ask you guys about any special musical influences which led to the new material?

Timo: „Yes. No special musical influences. Maybe it’s something subconscious and reflects what I would like to hear myself. Also the nostalgia of the 90’s sound is one inspiration of course.“

How much are you still interested in the current music world, the Rock / Metal music scene?

Timo: „Can’t really keep up with it. When coming back to the business you are forced to follow it a bit more, but it’s not the same as back in the day. Of course it is nice to find something really great new music today too. It brings back memories of the great times of the 80’s and the 90’s when you discovered all these new great music genres. Mainly by listening to some special radio show or you got Cd’s from other side of the world etc. Music scene and business is what it is. Don’t really want to start complaining about it. We just had to adapt to it the best way we can.“