...And Oceans – an unusual name that works more as a metaphor for thoughts and colours than bearing any connection with nature, even though you can easily associate its physical structure with natural and spiritual vibes.

...And Oceans formed in 1995 in Finland by members who began their musical career in 1989 playing for a Death Metal outfit called Festerday. After several unofficial demo releases, ...And Oceans signed to the prominent French Metal label, Season of Mist, in late 1996 and issued three high quality Black Death Metal releases over the course of three years. Especial their magnificent debut album „The Dynamic Gallery Of Thoughts” was a really big surprise for me – unique and timeless dark art.

2001 many things have changed for the band. ...And Oceans signed to German Century Media Records during mid-2000 for a world-wide push of their third album-masterpiece „Allotropic/Metamorphic – Genesis Of Dimorphism („A.M.G.O.D.” for short). 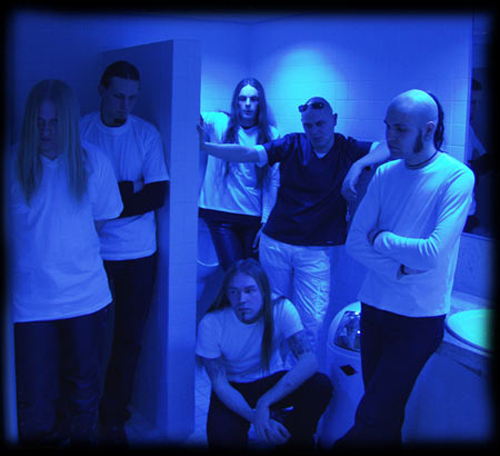 Now the time has come to celebrate the fourth regular studio-album „Cypher”, which shows even more the band´s magnificent talent to combine the best elements out of extreme Dark Metal with an incredible amount of electronic parts.

Hey Kenny, for many a very important questions since years: What means your band name? And why with 3 dots in the beginning?

„When we started this whole ...And Oceans thing we wanted to have a name with no restrictions in any form. A subliminal name that constantly takes new structures along with the personalities behind this curtain called life. The name is not linked to any natural factors, it works more like a metaphore for thoughts and colours which tend to circulate in different forms. The three dots in the beginning symbolize the pre-phase before the things and beings that never were. `And` stands for the additional phase when things started to evolve and rotate before drowned into the world of confusion and along came the world and man with emotions and thoughts. "Oceans" is the presence of man, this world fallen out its actual orbit and been wrapped in plastic. And if you consider the gap that was before the things that never were, this presence of life and world might as well be the thing that should have never been.” 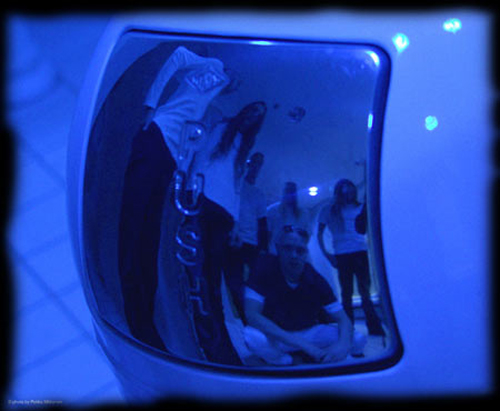 Which meaning does have the title of these fourth album?

„`Cypher` is pretty much associated with the unimportance of man and life in general, but as it also bears the values of several perspectives it was an ideal parallel to the sub-title `Insect Angels & Devil Worms`. Both complement one another. `Cypher` has several meanings and all those meanings are reflected in the lyrics. The CD bears the title `Cypher` and the double vinyl version is entitled `Insect Angels & Devil Worms` which I took from my forthcoming book. The insect-thing bears the same value as life in general is. It doesn't really matter if you are good or bad people, or what gods you pray to. We are all in this same boat sliding into extinction and sooner or later we all make the little flowers grow. The double vinyl version is released in 300 or 500 copies with the 50 first copies having all different artworks, and all of them are hand made.”

Be so kind and explain the readers the songs out of your new album.

„This new album is a concept album and the lyrical content is the same in every track. Only showing the same topic from different points of views. I never actually any analysis of my own lyrics because I want people to read it all themselves and make their own interpretations the way it suits their minds. Decadence is the topic, but how it brought to daylight is totally for the reader to observe. I have always thought that lyrics should stay in away on their own personal level like any art may it be a book, a movie or a painting.” 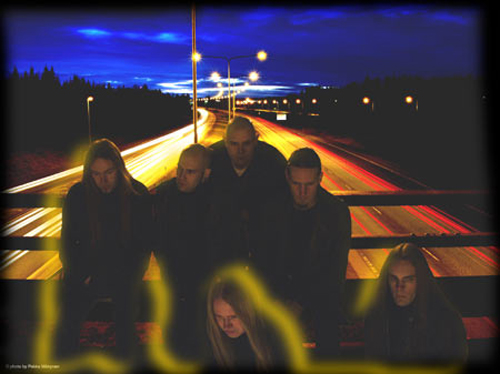 Which were (and still are) the inspirations for the music of ...And Oceans?

„This grey life has effected and infected our minds for long. I don't think we have any direct or specific musical influences. Of course things are attached to your subconscious from your trivial life, but as we are 6 members in this collective it's very difficult to say from where each and every member draws their inspiration. We all of listen to different type of music at home and some likes more metal based music, some more Techno oriented material and some extreme sub-cultural stuff.”

Many love your dark and tragic, moody melodies! Which one of you guys creates them?

„I have no recollection of how things turn out at the rehearsal room. We all work together as a collective and ideas pop up like spam-mail in hotmail boxes. Some of the ideas are rejected and some end up on albums. T mostly brings out the guitar melodies the way he always has, but the sharpened edges are always polished and modified by the whole band. This goes with everything, keyboards, vocals, samplers, drums, bass, drum machines. But what once sounded good at the rehearsal room might as well end up sounding totally different after the studio time.” 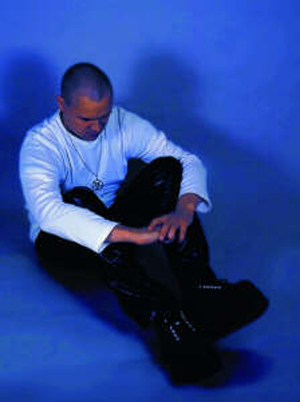 What is your definite artistic goal with the band?

„I think it's reflected from reality, or the reality we the apes of god think it is, of one's personal life. As band I'm not really sure of what we are doing and what we want to do. As long as we have the artistic freedom of creating what comes out naturally I'm satisfied. ...And Oceans is not our primal thing in life, even if it is a big part of our trivial grey life, but it keeps us in balance and gives us some sort of hope in this presence of constant floating. And as long as the words are not been thrown in our mouths and we can accomplish things they way we have imagined it, we are pretty satisfied with the achievements. Also the constant development is part of this process because we don't want to suffer from stagnation and repeat the same patterns over and over again. But we are not constantly changing just for the sake of changing it has to evolve naturally.”

You guys use a lot of electronic and so called industrial elements. How did happen the development?

„Nothing special about that actually. We just put our minds into the state of the machinery and created, sampled, manipulated and combined different sounds together in order to get more nuances in the whole sound image. Of course we have bought ourselves some new equipment as well, but it kind of feels like ...And Oceans has become a website that is updated once in a while. Even if we don't update our actual website that often. We also wanted to get away from the typical old sweet choir type of keyboard sounds. I'd say this new album is more heterosexual than the first albums. You don't need speed in order to create powerful music it's more about how you handle your instruments. We haven't reaped our machinery yet, but that might be fixed sooner or later.”

In which position between all the Dark- and Black Metal bands do you see ...And Oceans? Does it matter to you at all? 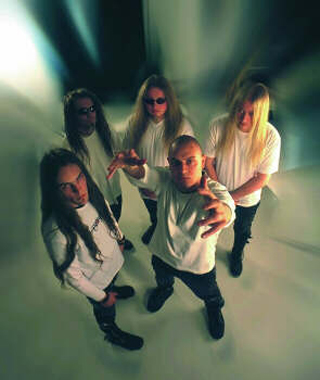 „Yeah, you are right we never think of this in the light of any Black Metal bands, or in the matter fact any other band. I don't waste my energy on issues like this. I have better things to do. But we do have some roots in the Black Metal syndrome and Black Metal was a big part of us for several years ago. I still admire the concept of black metal, but the idea of it has kind of drifted away, as well as we drifted apart from it too. I think for me the message in Black Metal bands is more interesting than the music itself. The only bad thing is that when you get on overdose of anything, may it be music, religion, drugs or whatever you loose control and find it more and more uninteresting.”

How looks a live show of ...And Oceans? It was to read, that they're really breath-taking and some kind of unique...

„The live shows have changed a lot since the early days, but the naive provocation is still present. I have always wanted to show up at gigs the way people would expect it the least. Sometimes in skirts, in only underwear, in paint or not be present at all. Those things have been left behind though. We are cutting down the verbal and member's physical provocation a bit and focusing more on gadgets and instruments in the background, but of course that's pretty much impossible to do on tours, which is a shame. We will always try to add something to the normal stage show, even if it isn't always possible.”

„We have cancelled all gigs for the moment because we need to insert all the additional sounds and patterns on DAT in order to possibly make any gigs at all. We are also talking about having session members giving a helping hand at live gigs, but we'll see how it turns out. We were asked to do some festival gigs in Finland this summer, but we are too busy at this time of the year to be able to participate. It's also useless to perform new tracks for an audience that hasn't heard the new material because it's not released yet. And Black Dawn is going for some gigs in the states, Rotten Sound is on tour, we are recording some new material with some of our projects plus some of us are actually working on regular basis. Of course we will do some gigs in Finland before the leaves of autumn fall, but that won't happen before later on. We wouldn't mind going on tour again, but we'd definitely want to do it with some bands that are musically in the same vein. I don't see any reason for us to go on tour with some extreme Metal bands. It would simply suck the last juices out of us.” 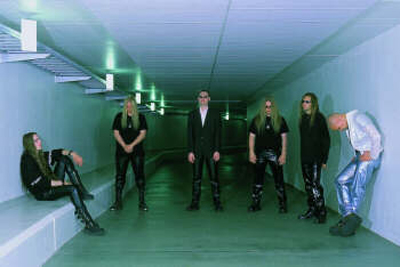 „We more of a take small steps at a time because if you plan or dream too much you always seem to get hit by a truck. But we have been thinking about making maybe three videos during this year because the last videos we were supposed to do didn't turn out the way we wanted it to. And the short movie I was creating with friend of mine was put on ice. Because he is a busy man he didn't have the time to complete the material. It was a short movie filmed on 8mm and 16mm plus on a security camera. The material was shot at different places, United States and Europe. It was supposed to reflect the beauty of man in different cultural backgrounds. The screen would have been divided into two or three screens showing the USA material in colour and the European stuff in black and white. This would have showed the excellence of the greatness of USA and the low life of Europe. Anyway, now we are trying to continue where we last time stopped, but creating the videos as three different ones. Well, I'm not going to reveal too much because nothing ever seems to happen the way it was planned.”