Already 1996 some enthusiasts bundled its creative powers in the Turkish culture- and economy-centre Istanbul, in order to realize its joint musical powers with an own band.

Nevertheless, 2007 saw the appearing of their self-titled debut album finally. In the beginning the participants initiated an experimentally directed mix out of Heavy- and Thrash Metal sounds, which found counterpart also in various cover versions.

An inherent style crystallized itself out in Altona with the following years. So the quintet offers highly interesting Progressive Metal with seizing emotional Ethno- and Folklore passages in charming traditional styles.

In June 2008 Altona performed live at Istanbul Uni Rock Open Air Festival, among Turkish groups as Pentagram as well with famous bands such as for example Testament, Opeth and Dark Tranquillity. I got in a dialogue with bass player Onur Burgaz.

Onur, could you please give a short review about the past years of your history as a musician and of Altona for all those, who don't know you yet? 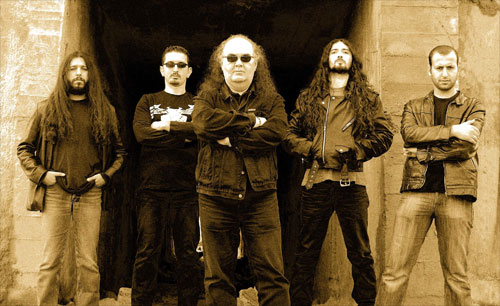 „My music and bass carrier started on 1999 with Altona. I have been in many concerts. Besides, I participate in other styles of music and bands. After years we finished our songs with Altona and recorded our first album.”

Dou you feel personally a deep spiritual connection of your creative soul with the traditions and the ancient wisdom of your fatherland, Turkey?

„Impossible to say no... Of course we are musically attached to our traditions and roots. If not, Altona wouldn’t exist.”

„It was „to be on scene with Altona, after 7 years”... Until that time, I have been with many styles of music and bands but with Altona, it was beautiful to play and share a festival with bands like Opeth and Testament.”

Got feedback from Germany at all so far to the album?

„Yes, we had quite positive feedbacks. These were especially about our music, originality of our melodies and progressive structure combined with Anatolian themes. We also had few interviews with printzines, we hope these will increase soon.”

Got good feedback for Altona from the Turkish Metal scene?

„We had positive feedback after our first demo at 1996 from one of the most important Weekly Heavy Metal fanzines of Turkey (called Sebek, throughout the five years). With our first album at 2007, change of musical structure positively surprised our fans and it is shown as an important work about Progressive Heavy Metal in Turkey. Our first live performance after album had good reviews. Of course there has been negative feedbacks too as we respect them all the time.”

Which is the most inner driving force within the band to create this kind of music?

„In Altona, every member likes different kinds of music and we can write our songs without attaching ourselves to simple patterns. Besides we use and let Anatolian culture and eastern melodies to effect our music. After adding thrash structure, the final music belong to us.”

Five experienced musicians in one band-team: isn´t it difficult sometimes, to get all the ideas fitting together realized?

„Sometimes it is difficult to combine five ideas to one great idea. Improvisation is our way to produce the music.”

Let's talk straight about your current album „Altona”; what's behind all this? With which expectation(s) did you begun on writing music for this album?

„After 2000 and member changes in band, compositions started to appear differently. Everybody started to bring something. This attached us to the band more effectively. Everything started with our song „Dead One”. We created that song by improvisations and this effects to other songs directly. The melodies coming inside of the band, drew the path that we would like to lead as an album.” 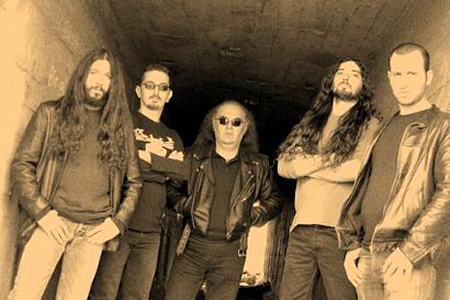 Does have the front cover art of the album any special meaning?

„It tells the complexity in a simple way. Just like our album, it is not a conception, it is simple but complicated. As a design, it would have been better of course...”

Who or what influenced the writing of the lyrics for these album? And what are they exactly all about? Is it a concept work?

„We can not talk about one specific concept. The Album has no lyrical conception. The songs have melancholic theme and the common concept of the lyrics are hopeless point of view and sadness. You may feel this in the melodies. For example, „Eternal Depth” tells the story of disappearance of an ancient village at the east of Turkey and „Dead One” tells the story of a friend who commits suicide. We had the lyrics before and then we combined them with the musical themes.”

How many folklore instruments have been used for the songs on „Altona”?

„We used three but in the mix we left 1 for the album. We used traditional end blown flute, cittern and zither but zither and cittern have been lifted due to musical concept. End blown flute has been played in „Eternal Depth”.”

What you guys want to tell the listeners with your new music and lyrics?

„We are about to finish songs of our second album. Musically it will be full of ethnic melodies. We are planning nine songs and same lyric themes will go on.”

And in general, who influenced and influences you guys mostly in making music?

„There are lots of bands that we are fan of but in our producing flow, they are all far away. Bands like Cynic, Uriah Heep, King Crimson, Queensrÿche, Atheist and Black Sabbath guide our melodies sometimes.”

What can you tell mainly about the recording- and production-time in the studio?

„It was not easy. Our budget was too short. Everything has been recorded in a hurry. After Vahdang joined the band, we finalized the vocal records and came to mix level. Our keyboard player Sedat led out all work in recording and mix time. Because of the budget, we had some problems about the sound. It appeared as old-school. We would have created cleaner sound but all depends to your production budget of course.”

What can you tell the readers about the Turkish (Folklore) Metal scene in general?

„After 1980’s good examples of every kind of Metal Music started to be made. Turkish bands also can participate in international festivals, which take place in Turkey every year. Some of them can show themselves on abroad. These are so honourable events.”

What's your opinion about the German Hard Rock- and Metal scene?

„There are lots of German Bands that shown up whole entire heavy metal world and most of them are really important. It’s hard to understand Thrash Metal without Kreator, Destruction or Sodom. Also there are hard core and extreme Metal bands which makes German Metal culture much more important. With great festivals that are made in Germany, I can say that Germany is one of the most important Heavy Metal castles of the world.”

Do exist current plans for a tour of Altona?

„We have some contacts but there is no certain deal. We hope to meet with heavy metal fans in Germany and make them listen to Altona and our musical difference.”

What do you think about nowadays bands which do mostly anything (even change the style of music) just to become and stay popular?

„To work on about staying popular is old-school bands’ problem. Everything changes in music. Fans expectations change and classical mentalities do not work. Musically, new albums with same rhythms and themes, would not be a new album. Bands, who are still popular, already face the change and upgrade their musical mentalities. Besides all, being popular for heavy metal is a concept very far away.”

Which CDs are rotating mostly in your player these days?

„It’s Cynic, last album „Traced In Air” nowadays. Besides, as different from this styles, „Earth” is one of the albums we listen much. Also Sun O))) is a band we follow for a while.”