„The happiest man is he who learns from nature the lesson of worship” – R.W. Emerson. This is to read on the surface of their new CD, and it speaks for itself. The essence of Agalloch’s music is a combination of cold, dark sorrow and natural aesthetic beauty.

The foundation of the band began in late 1995 when a Doom/Death Metal project called Aeolachrymae was reduced to a pile of ash.

The primary goal in the beginning was to create majestic and epic Dark Metal. The uniqueness of the music of Agalloch earned the band a deal with The End Records and in January of 1999 they entered the studio to record their debut album „Pale Folklore”. It was released in June of 1999 and received much acclaim for it’s grim concepts and folkloric aesthetics. It‘s a great and timeless piece of music. Throughout 2000, Agalloch kept a very low profile until finally emerging again with the release of a limited mini CD entitled „Of Stone, Wind and Pillor” in mid 2001.

From late 2001 until early 2002, Agalloch recorded their second album, entitled „The Mantle”. A 70 minute grand epic which brings to life a darker, more bleak view of the world through more transcendental, existential, and nihilistic motifs. „The Mantle” is an expression of longing, decay, and the desperation of hope. I‘ve met guitarist and vocalist John Haughm within ancient dark forests. 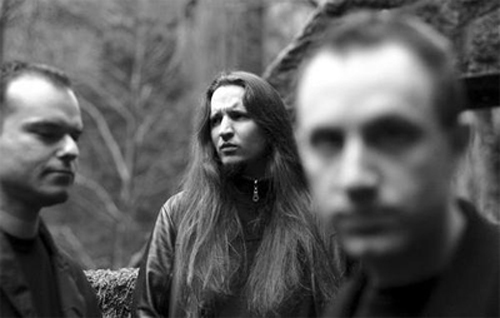 How has been developed the unique, magic-like spirit for Agalloch?

„A combination of interests, visions, and influences over the years. We are a band which wants to release timeless music and we are willing to spend the time and effort to create such. Of course, Agalloch also wouldn't be what it is without the other members so I must credit their involvement, in the development of this spirit you speak of, as well...”

Which role played your love to mother nature at the founding of the band?

„For most of my life I have lived in small towns in very scenic states with forests, mountains, and nice wilderness everywhere. I've lived in Montana, Washington, and New Hampshire in addition to Oregon; where I currently live. Portland actually is a good place for me because it blends together a large, clean urban environment with the nearby forests, mountains, and ocean. I think I speak for the other members of Agalloch when I say this place suits us well.”

Agalloch hails from Portland, Oregon – in the heart of the Pacific Northwest. Do you spend much time inside nature; and, if yes, which part is impressing you mostly?

„I spend some time in nature for hiking, photography, and visiting places like the Timberline lodge, the Pacific coastline, and Multnomah Falls. Lately I spend more time in downtown Portland soaking up the enchanting atmosphere this city has to offer. I guess I've become slightly more metropolitan in recent years.” 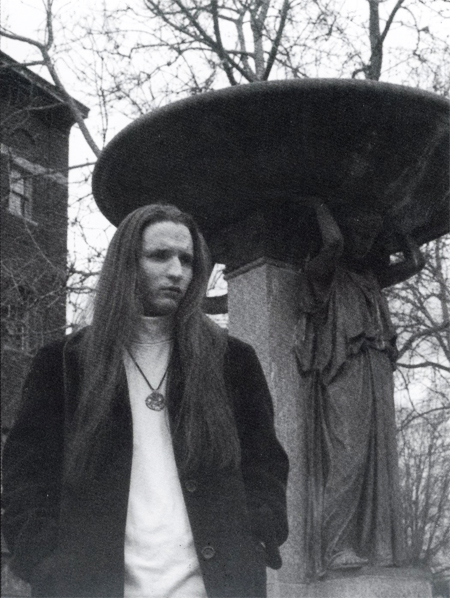 What was the main reason for you, to found Agalloch?

„I wanted to form a serious band for which I could express myself and create art which could stand alone. We had some rather interesting ideas and ambitions in the beginning; some have materialized, some have not. Agalloch was not a band which was started by just a couple guys jamming together. It was more of a planned-out agenda...”

„Agalloch or Agallochum is a resinous wood which is burned for it's unique, aromatic smoke. It is used as an incense.”

Inside the booklet of the CD is mentioned a „finnish hospitality in ´99”, what was going on there?

„I visited Finland for a month in the Spring of 1999. I visited friends in Helsinki and Turku and traveled a little bit in the Southern region of the country. I simply love the Finnish culture and the people whome I stayed with were very hospitable. I returned the favor to one of these friends when he visited me in Portland later in that year but I felt it necessary to acknowledge all of these people personally in the booklet of `The Mantle`.”

Was it hard to get the members for Agalloch together?

„No. We have had the same line-up more or less since our second demo. We're not the type of band which constantly changes members and I think that has helped our progression.”

How would you personally describing the style of Agalloch at best: „Dark Metal/ Epic Post Rock/Sad Gothic Rock/Folk Rock“?

„I prefer not to put rhetorical labels on our music. We are a band which likes to explore many styles and aesthetics suitable to us and I would hate to limit ourselves within one or two genre boundaries. To define us is something which is the responsibility of the listener.”

Your new German record company Grau, named some influences of your music, such as Pink Floyd, Godspeed You Black Emperor, Sol Invictus, Ulver, Fields Of The Nephilim and Dissection. How much do you share those listings?

„I've never been a huge Pink Floyd fan aside from some of their early albums like `Atom Heart Mother` and a couple songs on `The Wall`. I'm a fan of most of the groups listed but I think this was more so a description originally stated by The End Records. Obviously GYBE!, Ulver, and Sol Invictus were quite influencial for `The Mantle` but Fields Of The Nephilim and Dissection were more influencial on our older material and first album.” 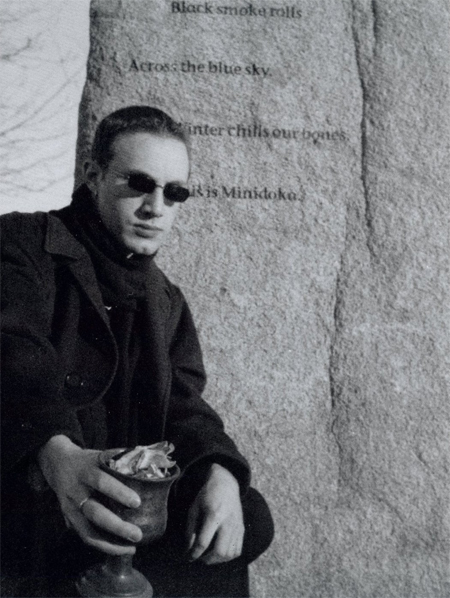 „The Mantle” – what stands behind these title?

„The Mantle symbolizes the Earth or nature in general (it is, in fact a layer of the Earth). It symbolizes something greater that we cannot control or harness like nature, the spiritual/supernatural, and the complexities of the human psyche.”

John, you did the whole photography and graphical artwork of „The Mantle”. I like it, it looks totally outstanding with all that chosen grey colours! Please tell about the creative process!

„It actually started two years ago when I was walking along the waterfront in downtown Portland on a very grey October evening. It was then when I started to get an idea of the kind of imagery and colours I wanted to use for our second album. I took a lot of photos and experimented with various options and decided a very clean and stark layout would work the best. This is pretty much our creative process. It's usually based on the mood of an experience that I want to replicate in an artistic realm.”

Be so kind and explain the main lyrical content of „The Mantle”!

„Lyrically, this album is a bit more existential, transcendental, even somewhat theological in theme. When writing the lyrics for this album, I questioned the meaning of existence, the illusion of love, dreams as a supernatural entity, religion, the bleak state of the world/mankind, our relationship with nature, and what it all means to me personally.”

What is the specific lyrical meaning behind most of these new songs?

„Well I'd rather have people draw their own conclusions when reading the lyrics. As for the instrumentals, I will explain their meaning...

`A Celebration For The Death Of Man...` – it introduces the contemplative character in `In The Shadow Of Our Pale Companion` and links to the theme of '...And The Great Cold Death Of The Earth`. The atmosphere of this piece was inspired by my visits to the scenic cliffs of the Colombia River Gorge, just East of Portland. 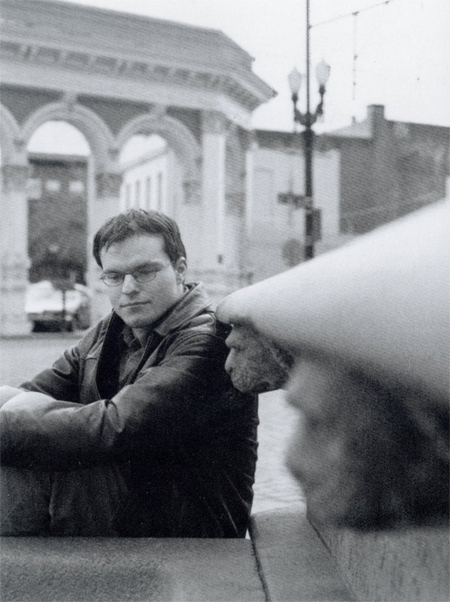 `Odal` – is my reaction to the fascist Bush administration's reckless view of the environment. Pure and simple, that idiot does not represent us!

`The Lodge` – is a tribute to the Timberline lodge. This is the same lodge that the `Pale Folklore` photos of Anderson and I as well as the door of iron and wood were taken in. It is also the same lodge that was used for exterior scenes in `The Shining`. It is a wonderful place. It is one of the places I go to 'get away'.

`The Hawthorne Passage` – we wanted to musically capture the various urban atmospheres of downtown Portland. I think (and a few locals have agreed) we expressed it perfectly.”

Which were the main inspirations for the music of Agalloch?

„During the recording of `The Mantle`, I listened to Sand (`The Dynamic Curve`) a lot. It was an album I listened to while driving to the studio and it really set me in an appropriate state of mind before some of the early sessions. While writing the material for `The Mantle`, I was inspired by Swans (`White Light From The Mouth Of Infinity`), Death In June (`Nada`), Sol Invictus (`The Blade`), Bathory (`Hammerheart`) as well as Laibach, GYBE!, Ulver, Depeche Mode, In The Woods..., and films from Ingmar Bergman (`The Seventh Seal`), Jörg Buttgereit (`Der Todesking`), and Jim Jarmusch (`Dead Man`), among others...”

Do you read poems?

„Not often, but I do enjoy Charles Baudelaire, William Blake, Ezra Pound, etc.”

Which were the inspirations for the lyrics of Agalloch?

„Just life. You know... thoughts, fears, the world around me, and so on. I don't usually look to other poetry for inspiration. I just write down how I feel or what is in my mind and try to put it in context with the atmosphere of the music.”

„We have a few smaller releases planned for 2003, perhaps some live performances, and another album in 2004. We are definately in a more prolific creative mode these days.”

Last words here to the fans of Agalloch, and also to new ones?

„Thanks for your genuine interest...”