9 / 10
"… a majestic march through the genres of Thrash and Power Metal … a ground shaking, wall crumbling, bone breaking, neck jarring barrage of … an exciting teaser for the new album."
(Metal Gods TV)

"… a succulent morsel - and I'm really looking forward to feasting on the main dish … overall, a very heavy Thrash come Power Metal romp … 'Back To War' is an exciting teaser for the new album …"
(Frenzy Fire)

"… an extremely melodic mixture of power and thrash metal with some progressive touches … tight drumming and gripping riffing, as well as frontman Emre Kasapoğlu's vocal acrobatics, make ,Back To War' an excellent calling card for the upcoming album 'Infestation', which is scheduled for early 2022."
(Legacy)

And the seemingly programmatic band name is not deceptive in the slightest, because it simply covers what they offer perfectly! When VENGEFUL GHOUL first came into existence in 2005 in the metropolis of Istanbul, the first participants immediately realized that musically they are clearly called to higher things …

On April 17, 2021, VENGEFUL GHOUL revealed the cover art of their brand new single "Back To War" from the upcoming 2nd album "Infestation"!

"Back To War", recorded at Ruthless Crow Studios, Istanbul, is available on all digital platforms since May 7, 2021.
This is how it should be: the new track was mixed & mastered by renowned sound guru Jens Bogren at famous Fascination Street Studios, Örebro. Hugely appreciated Bogren also did the final mastering for "Timeless Warfare" and the Swede delivered a really brilliant job for this. 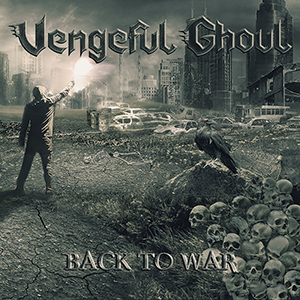 Accordingly, the songs of the technically top trained commando remind much more of fervent incantations than of regular genre songs. And so the violently gripping POWER THRASH METAL of the massively talented overpressure band matured remarkably fast to a damn substantial recipe, as the band showed 2014 with the multiple excellent debut album "Timeless Warfare".


Flashback:
After the 2006 demo "Premier Fury" and the 2013 e-single "Ruthless Crow", VENGEFUL GHOUL thus returned very strong. Vocalist Emre Kasapoğlu and rhythm guitarist Senem Ündemir together with their formation have been gripped by the desire for the heaviest Thrash rage as thoroughly as lastingly, as can be clearly heard on this killer disc! 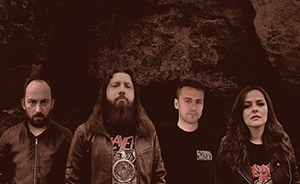 The all-around demanding quintet leaves in the amazingly cleverly structured compositions neither original ideas, explosive riff outbreaks nor a far-reaching distinctive playing culture missing. Also sophisticated arrangements are a matter of honor for these high-level musicians.

Progressive passages are interwoven just as skillfully and with clearly audible success, so that the whole thing remains permanently exciting. Provided with traditional Heavy Metal elements, the numbers of the juicy record gain more memorable significance with every play.

Ultimately, the deeply determined Bosphorus troupe knows how to pile up their very own mix of glorious US Metal mastery and a very own, consistently authentic attitude symbolically miles high! (Markus Eck)

VENGEFUL GHOUL is available for interviews via phone, Skype & email