10 / 10
"… an incredible achievement for RUADH … Perrett has struck gold with his evolution … creating a perfect sonic representation of the nation - the brutality of the history of Scotland is omnipresent, as is the great sadness and despair … but more than that, amid the melancholy and Black Metal aggression, there is a very real sense of beauty running throughout 'The Rock Of The Clyde' … this is the most emotionally touching Black Metal album of the year thus far, and a true masterclass of atmospheric Black Metal."
(Distorted Sound)

4,5 / 5
"… a beautiful album … strong empowering atmosphere … powerfully emotive … should be of appeal to fans of bands such as fellow Glaswegians, Saor and Fuath or Manchester’s Winterfylleth … it’s a great listen."
(The Metal Wanderlust)

9 / 10
"… the best Folk infused Metal album (blackened or otherwise) I’ve heard in a long time … if you want to get into Black Metal or Folk Metal this album would be a good start … if you enjoy these genres already, this album needs to be added to your collection immediately."
(Metal Temple)

9 / 10
"Mastermind Tom Perrett once again proves his feeling for great songwriting and an atmospheric density that is second to none ... if you don't just want to consume music, but really want to feel and experience it, you can't go wrong with "The Rock Of The Clyde".
(Route 666)

4 / 5
"If I had to use two words to describe this, it would be 'Scottish Bathory', which is a bit simplistic, but pretty close … the Folk elements in this are in sounds and melodies, rather than authentic folk instruments, which gives the whole thing an almost Moonsorrow kind of vibe … a band to watch for."
(Metalcrypt)

8,5 / 10
"… acts like Moonsorrow, Sojourner and Viking era Bathory all come to mind … listened to this album numerous times and every time, it has been from start to finish … no skipped tracks, no jumping from one to another … it really sucks you in and just flows from beginning to end … a great sophomore effort and one that I certainly see me listening to a ton in 2020."
(Folkmetal NL)

80 / 100
"… skilfully … sturdy drums, pounding bass lines and always those recurring dreamy guitar lines … the blast parts on 'Fields Of Heather' are so wicked as if the autumn breeze that turned into a powerful gust of wind …"
(Zware Metalen)

8 / 10
"… an uplifting epic release that demonstrates Perrett’s fine ability to reach deep into his country’s history and culture. A welcome second edition."
(Musipedia Of Metal)

8 / 10
"RUADH's proposal on his second album under the canons of Atmospheric Black Metal is masterful. There is a balance between interpretation and melody that take you on a journey through the forest, showing landscapes that represent that duality between light and darkness … will be to your liking if you are interested in the fusion between Black Metal with other musical influences such as Folk, Symphonic and perhaps Progressive."
(This Is Black Metal)

8 / 10
"… another fantastic record that stands tall amongst Scottish Atmospheric Black Metal … a freezing wander through rocky landscapes and frozen tarns as you reminisce about the struggles of many who dwelled there before … the fusion between classical Folk and glorious atmospheric Black Metal is powerful and this record would appeal to many including those who would not be immediately drawn to extreme Metal in general."
(Cvlt Legion)

8 / 10
"RUADH combine the soaring progressions of classic atmospheric Black Metal with the clarity and rhythm of ancient times, tying it all together with a monstrous barking voicing … music with exceptional ability and intelligence …"
(Chained Disintegration)

7,5 / 10
"A majestic journey through lands that cry out for freedom and independence."
(The Crying Orc)

7,5 / 10
"… more than sufficient to whet the appetite of black metal fans looking for something captivating and, believe it or not, pleasant."
(The Metal Observer)

7 / 10
"… epic moments that not only show the potential of RUADH but also entertain fabulously ... in its best moments the clear vocals of Tom Perrett awaken memories of Doomsword or Primordial ... if the interplay of melodic guitars, emotional vocals and folky atmosphere is right, RUADH can create goose bumps."
(Metal DE)

3,5 / 5
"… 'The Rock Of The Clyde' will feature among the best Atmospheric Black Metal albums of the year without a shadow of a doubt, proving not only that Tom is thoroughly connected to his Scottish roots, but also that underground Metal music always sounds more compelling and vibrant when its made of Scottish iron."
(The Headbanging Moose)

"The songs are epic – the first four average ten minute apiece – and are great background music for luddites like me … however, take the time to focus and there’s a lot more there … ten minutes is a long time to fill with a piece of music and each of the songs on here is more than just that, it’s a story – and a decent story needs time to be told … I liked this …"
(Moshville)

"… an incredibly listenable album for something so obviously rooted in the extreme … pretty irresistible … does everything with the sure hand of a master craftsman, with the result being a joyous celebration of everything that makes the Black Metal genre so beguiling … great stuff."
(Sentinel Daily)

"… hone in on a Viking-era Bathory vibe, with atmospheric backing choirs supporting a well-delivered baritone …  an album of extraordinary quality … grows with each listen, new nuances revealing themselves every time."
(Black Metal Daily)

"… mystic and partly Folk-like parts with strong sounds ... in a really stirring way ... if you want to go on a musical journey to the rough Scottish Highlands, you should let 'The Rock Of The Clyde' take you there - it's worth it!"
(Metalmamas Neuigkeiten)

"… a beautiful example of atmospheric Black Metal, very melodic and not at all 'obscure' like most records of the genre."
(Mister Folk)

"Traditional Melodic Death, atmospheric Death and Celtic Folk leanings inhabit this album in its entirety. At no point does any style come to sound like a gimmick or a stretch too far, it is an interesting mix of styles passionately delivered."
(The Razor's Edge)

"You will feel the beautiful Scottish landscapes and the magic of the nature in an instant … carries a certain melancholy and darkness even though each song will evoke different emotions … definitely recommended to the lovers of this genre as well as to the ones wanting to discover and feel nature through the music … kudos to the band for delivering such beautiful melodies!"
(Tempelores)

"The delicate and powerful features at the same time are broken by an unexpected harsh and strong vocals changing everything … an album that gives the fan a lot of hidden surprises."
(Metal Addicts)

"… an album that exudes Scottish folk influence in a way that doesn’t feel cheap, but it also doesn’t dilute the harsh Black Metal influence too much to say it isn’t there … melodic and atmospheric … plenty of moments of aggression that will leave purists feeling satisfied … I like that this seems to be the future of Black Metal … an honest expression of the influences that shaped a person and them giving back to their home and their heroes …"
(Nine Circles)

"… spectacular … from composition, to songwriting, to dynamics, and beyond … resplendent ebbs and flows abound throughout the five meandering tracks that make up this magnificent effort."
(Hated One)

"Although there are a lot of melodic, atmospheric parts here, there is still room for aggressive, venomous, raw structures on this album, which will surely also satisfy Black Metal purists … if one wants to go to the world of Scottish myths and legends, drink a bottle with an ancient druid and admire the beauty of the land there … 'The Rock Of The Clyde' will be a great travel companion and a great guide."
(Apocalyptic Rites)

"… the whole work can be listened to very willingly … an ideal soundtrack for those who love to wander through woods, mountains and ruins, letting themselves be conquered by music that makes the atmosphere one of its strengths … I felt like going to Scotland."
(The Murder Inn)


RUADH (which is pronounced 'Roo-Ah' and translates to 'red') is an ATMOSPHERIC BLACK METAL solo-project from Glasgow, Scotland. 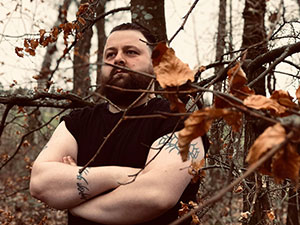 Drawing from the vast well of history, culture and mythology, musician and songwriter Tom Perrett set out to compose music purely to taste, creating an unmistakable atmosphere with the beating heart of old school Black Metal favourites of his, such as Windir, Bathory, Burzum and others, which should also appeal to fans of Saor, Winterfylleth, Panopticon and similar acts.

Tom was born and raised in one of the oldest Burghs in Scotland, which translates to 'The red glen'. The derivation of the name of the town is unclear but one theory is that the area was once a settlement of Reuther, an ancient king of the Scots, who ruled between 213 and 187 BC. 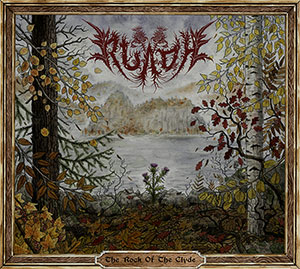 "The Rock Of The Clyde" is an evolution from RUADH's debut album "Sovereign". It has a much more melodic feel, yet has more visceral elements too. Containing six tracks of epic, Scottish Atmospheric Black Metal with Folk elements, it is massive in both scope and scale, taking you through the Iron Ages in Scotland.

It also explores the history and mythology of the people of Scotland, conveying both sorrow and uplifting, almost heroic tones.

RUADH is available for interviews via phone, Skype & e-mail