90 / 100
"… good amount of elements such as clean female and male voices, acoustic parts … something that I identify as Opera Rock … a lot of atmosphere … and of course on the cusp, all the power of Power Metal at full speed …"
(X Reviews)

9 / 10
"… nothing short of excellent … lends itself in many ways to emotive subjects and the opener ‘Danger Silence Control’ is Power Metal at its best … the level goes up a notch on tracks such as ‘Stars Of The Night Before’ and ‘Mary And The Children’ which are high-speed riff masterclasses with hooks a plenty."
(Wild Spiritz)

9 / 10
"… an interesting proposal product of the musical experience of their members coupled with the presence of musicians of different genres within the world Metal scene … an album that begins to lay the foundations of Melodic Power Metal characterized by sticky and rhythmic songs in combination with the intensity and speed in the performance of musical instruments that illustrates an historical event of great importance."
(Darkzen Dragon)

4 / 5
"Technically the band is on a high level and the songs are convincing despite the diversity almost without exception ... in the whole, with the lyrical concept, here is even a great album, which needs a few runs, but then really ignites."
(MetalUnderground AT)

8 / 10
"… a great album with compelling and complex elements."
(Metal Temple)

8 / 10
"… power … sprayed with Thrash … aggressive and incessant … nice album, developed on an absolutely deserving and engaging concept: welcome back and congratulations!"
(Metalhead IT)

75 / 100
"… a well-kept and researched album … with a certain retro flavor that goes well with the proposal of the band … expresses a high average quality … fascinating and involving … welcome back, REVOLTONS!"
(TrueMetal IT)

3,5 / 5
"REVOLTONS’s brand of Power Metal incorporates elements of thrash and prog to create songs that have creative arrangements along with substantial melodies."
(Heavy Music Headquarters)

3,5 / 5
"… deserves respect and consideration … some songs are simply fantastic, you will understand why the exam is widely passed …"
(All Around Metal)

"… mix of Power, Thrash and classic Metal with some strong prog leanings … worth listening to a few times to allow full access to the joys it holds (I mean musically as it is a terribly sad story) … there is enough evidence to suggest they could pick up an audience in other parts of the world …"
(CGCM Podcast)

The equally playful and epic mix, which is clearly influenced by bands like Symphony X, Dream Theater, Iron Maiden and Helloween, is actually typical of the formation's home country.

This time, the musicians skillfully insert various cross-references to the Thrash and Progressive camp into the fluidly instrumented base made of classic Metal elements. 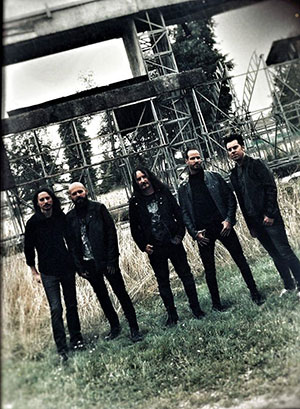 The content of the new and fifth album "Underwater Bells Pt. 2: October 9th 1963 - Act 1" revolves around the devastating catastrophe of October 9, 1963, when the Vajont dam in the Alps in northeastern Italy was overwhelmed by a tidal wave, what became known as the 'Vajont disaster'.

Caused by a massive landslide from Monte Toc into the Vajont reservoir, gigantic masses of water subsequently poured down the valley, whereby the town of Longarone, the towns of Faé, Villanova and Erto and five others were completely destroyed.

The tragic accident, which happened 100 km north of Venice, led to over 2.500 deaths. To date, more than half of the victims have not been found. Since some of the band members come directly from Vajont, REVOLTONS also want to do important remembrance work with the new release. 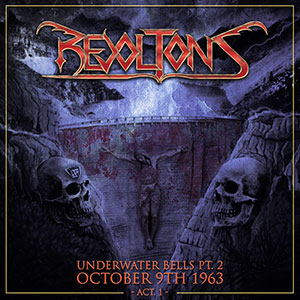 With the individually and naturally vocalizing front man Andras, REVOLTONS, launched in 1991, have a capable singer.

Various guest musicians from the Italian Metal scene are represented on the new output with their respective contributions - and with Mr. Blaze Bayley a respected celebrity could be won, which can be heard in the song "Grandmasters Of Death".

The broad musical repertoire of this undoubtedly very talented group enables seemingly innumerable ideas to appear, on the one hand powerfully and punchy as well as technically demanding.

REVOLTONS are available for interviews via phone, Skype & e-mail