10 / 10
"… will surely transcend as one of the most important in Heavy Metal … you will be captivated by its powerful sound, the versatility and the impeccable execution technique that this band has …"
(Metal Pedia)

80 / 100
"… what gives the music of ON ATLAS' SHOULDERS its own twist is the vocals of Marius Bönisch … some very nice songs … good sounding record … the guys sound pretty diverse."
(Hell Spawn)

8 / 10
"... power and strength to keep us going … good riffs, excellent solos … really captivating … a second album that will further promote the band to lovers of more traditional sounds."
(World Of Metal)

8 / 10
"... undoubtedly positive … a record of undoubted quality, varied, well-crafted and without too many frills, showing not only an excellent ability of composition but also of execution, not abstruse and extemporaneous, but thoughtfully presented, so that it contributed to the realization of the songs and, above all, to their uniqueness."
(Book Of Metal)

11 / 15
"... neither commit the mistake of sinking into too thickly applied pathos, nor follow the oddball footsteps of Manilla Road or Cirith Ungol to the border of inaccessibility ... pleases with beautiful, creative melody lines and an excellent metallic base."
(Metal-Aschaffenburg)

3 / 5
"... listening is always pleasant and there are no boring tracks or fillers of any kind ... good quality level ..."
(All Around Metal)

"… 'Hyperion' should please most headbangers who like Heavy Metal albums that are tradition-conscious but don't sound like a vintage product from the 1980s ... clear recommendation to buy ... excellent!"
(Epic Metal Blog)

"… songwriting is strong ... some good Power Metal tracks here … fantastic ideas and performances by all the members of the band …"
(The Razors Edge)

"… an ancient flavor, and sometimes even antiquated, but well produced and well executed …"
(Over The Wall)

"… a treat for the ears … own mixture … one can definitely speak of their own face … surprises … in a positive sense … a bit strange, but good."
(Wings Of Death)

"... I liked it a lot ... if you like bands like Brocas Helm, Heavy Load, Megaton Sword or Eternal Champion, you should give it a listen ... interesting thing ..."
(Slaine Mc Roth)


On May 14, 2021 ON ATLAS' SHOULDERS presented the official, high quality converted music video for the album song "The Executioner". Lyrics & visuals speak for themselves in traditional, classic Heavy Metal performance.
The music video is set medieval times and was filmed at the historical castle Schloss Burg in Solingen, Germany:

The band comments:
"The protagonist has been sentenced to death by execution. Will he survive? The video was produced by AlphaAlias, with pyrotechnics and lights provided by NoiseToys. The song deals with the historical role of the medieval executioner, who was simultaneously celebrated and feared. He played a critical role in carrying out judicial sentences, primarily capital punishments, and was celebrated for doing so, as the latter were also seen as a main source of entertainment. At the same time, he was also avoided and feared in daily life, leading to a complex, split perception of the figure. Musically, this Traditional/Power Metal track pushes forward relentlessly and offers a memorable chorus, harmonized backing vocals, two epic guitar solos and thundering drums."

Since April 16, 2021 ON ATLAS' SHOULDERS present the official music video for the album song "Ruins" - artwork and music video were created by Marius Bönisch, the lead singer of the band:

The band comments:
"'Ruins' deals with the topic of death from multiple angles, emphasizing that it serves a fundamental purpose for all of existence. The listener is motivated to face his biggest fears and live life to the fullest, because when confronted with death, the final judge, we mustn’t have any regrets. Finally, death also serves as a unifier by being everyone's inevitable end, regardless of for example race or religion."

Since March 19, 2021 ON ATLAS' SHOULDERS present the official music video for the album song "5 Billion Years":

The band comments:
"In '5 Billion Years', the protagonist is a troubled soul faced with the moral dilemmas of today’s day and age. With countless injustices in the world, from poverty and wars all the way to climate change, he cannot decide what cause to fight for. At the same time, the moral apostles tell him that their cause is the only right one, shaming him for not choosing their side. However, everyone always loses sight of the fact that everything we know today will no longer exist in the far future: It is scientifically proven that the sun is expanding and will swallow the earth in about 5 billion years, hence the title of the song. In the end, you should fight for what you believe is right, live your life the way you want to and ignore the critics."

On February 19, 2021, the ambitious Frankfurters released the music video for the album song "Age Of Fire":

"Age Of Fire" is the first single from the upcoming album "Hyperion" and was written by the band while they were locked down in Germany during the lockdown.
Musically, this Traditional/Power Metal epic features catchy melodies and backing vocals, a Neo-classical double guitar solo and eruptive double bass thrusts.
Lyrically, "Age Of Fire" is set as an epic fantasy tale of hope and despair, heavily inspired by the theme of the popular Dark Souls video game series. The animated music video with superimposed lyrics was created by Stereo 27 Productions.

You love it completely individual, contagiously fervent, thoroughly inspired as well as with the greatest possible devotion?
Then get prepared for 100 % genuine and overwhelming listenable EPIC HEAVY METAL of the highest order! 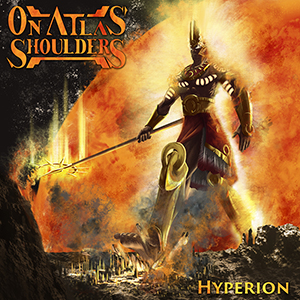 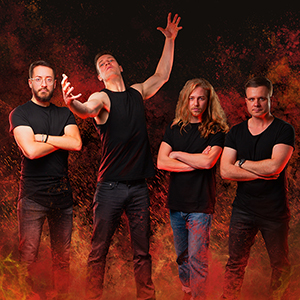 Their second full-length assault "Hyperion" delivers anthemic, combative and gripping material from start to finish - an exquisite album for connoisseurs and appreciators that is as very deeply thought-out as it is captivating. "Hyperion" will hail the world in summer 2021!

ON ATLAS' SHOULDERS is available for interviews via phone, Skype & email