10 / 10
"… electrifying energy … blunt, enigmatic and volatile, this is MORTAL INFINITY and the monster waking up in 'In Cold Blood' …"
(Roadie Metal)

5 / 5
"... an incredibly entertaining Thrash Metal album that combines several genres into one damn good soup ... fantastic mix that doesn't sound dull or catchy ... will stand out clearly from the genre, but above all it will represent a unique selling point ... for me the Thrash Metal Album 2019!"
(Radio Rock FM)

9,5 / 10
"… quickly into its stride, steaming ahead at full tilt … terrifying yet terrific brutal blast … a mighty monster riffing rampage that is beyond heavy … full on, in your face and aggression fuelled Thrash Metal …"
(Metal Gods TV)

92 / 100
"Rounded off by an atmospheric cover and fitting lyrics 'In Cold Blood' is an album that should be high on anyone’s list who is into traditional Thrash Metal with a modern production. One of the biggest highlights when it comes to Thrash Metal in 2019 for sure."
(Metal Archives)

8,5 / 10
"'In Cold Blood' succeeds because it never wavers from its stance to produce punishing Thrash with Death and modern Groove aspects that don’t take the need of the individual song for granted."
(Dead Rhetoric)

8,5 / 10
"… Thrash Metal of the good old school ... a little Destruction and Kreator here, a bit of Slayer and 'Kill' Em All'-feeling there and now and then the Passau boys even squint towards the Bay Area and annihilate a few cool beers with Exodus and Death Angel - all this provides MORTAL INFINITY but with a breathtaking Death Metal note and thus gives the third, complete band venture the special extra ... rough diamonds row by row …"
(Powermetal.de)

8,5 / 10
"For anyone who doubted whether 2019 would be a more than excellent Thrash year, these Germans prove in cold blood that it really is! Mandatory listening for each thrasher!"
(Zware Metalen)

8,5 / 10
"MORTAL INFINITY are among the idealistic heroes of the underground … … sounds absolutely fresh … there are not many options to pen a better."
(Metalegion)

8 / 10
"... fast and wild ... MORTAL INFINITY manage it, to interweave old, proven influences of Exodus, Testament or Forbidden, but also more modern elements of bands like Pantera, Machine Head, Hatebreed or Lamb Of God so that you can not accuse them of plagiarism ... simply the right middle ground between tradition and modernity."
(Crossfire Metal)

8 / 10
"... there’s a variety and quality that will not let the listener get bored from the things over and over again …"
(Sounds From The Vortex)

3,5 / 5
"... comes in pretty well ... tough and relentless ... the fact that MORTAL INFINITY master their craft with their meanwhile third album is proven with 'In Cold Blood'."
(Stormbringer)

11 / 15
"Music, optics, themes, sound, attitude - MORTAL INFINITY embody much of what Thrash Metal stands for and should stand for. Keep it up!"
(My Revelations)

70 / 100
"… well developed … a work that has very stable traces that should not be underestimated … listening is recommended if you want to listen to a mix of genres related to Thrash."
(Heavy Metal Heaven)

7 / 10
"… with 'In Cold Blood', MORTAL INFINITY have released the album of their career … a brutal mixture of Death and Thrash, there is much to enjoy."
(Musipedia Of Metal)

"German Thrash Metal - brutal, aggressive and in your face, and exactly what you get with the new album by heavy thrashers MORTAL INFINITY … venomous and will slap you very hard around the head, whilst also viciously kicking you in the butt … a journey of savagery from start to finish … aggressive, angry and in your face …"
(Frenzy Fire)

"Powerful, even violent, the combination of Doblinger's harsh vocals, clanking drums with Death Metal touches and ingenious string work shaves pretty much everything ... especially the view over the Thrash border does the guys from the vicinity of Passau damn well ... an important step to stand out from the competition with its own sound."
(Metalhard)

"… you can’t go wrong with MORTAL INFINITY … they’re cranking out quality material on their own and I can do nothing but applaud and commend them."
(Metal Nation)

"… Thrash Metal with a similarly keen instinct for Death and Groove Metal … 'In Cold Blood' is a nine track trespass of old school meets new enterprise incitement … a release which left us basking in thick satisfaction."
(The RingMaster Review)

"… extremely sovereign and varied ... old-school attitude still exists, but the band stands with more than a foot in the here and now ... guitar work is extremely successful ... as for the last album I would mention Exodus, Lazarus A.D. and a pinch of Machine Head for comparison."
(Totentanz)


Fatal spiral of violence
Just like the eponymous best-selling novel by Truman Capote, the song "In Cold Blood" describes the disturbing and brutal crime that took place in 1959 in the state of Kansas in the United States of America:
An unsuccessful robbery that leads to the cold-blooded and bestial assassination of an entire family - and ultimately ends with two convicted killers on the gallows' rope.

If one wants to imagine the horrible atmosphere of this evening of the 15th of November, you can read the aforementioned world bestseller.
Or you can hear the atmosphere of the whole thing - poured into neck-crushing THRASH METAL:
On August 4th 2019, MORTAL INFINITY presented their new, official music video for the title song of the third album "In Cold Blood".

The new longplayer "In Cold Blood" has what many want to achieve so desperately: authenticity, attitude and above all undeniable class. After all, the sleek songs of the formation out of the Rottal-Inn area sound as real on all levels as the authors themselves are as musicians.

On June 09th, the formation around Shouter Marc Doblinger revealed the front cover art of the new album. And not only MORTAL INFINITY are happy with it, but also the graphic creators of All4band:
"Really one of the most epic concepts we've worked on so far, we're proud to be a part of it." 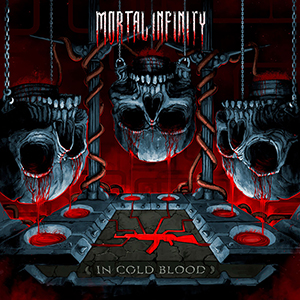 The Thrash alarm by the heavy-workers, which is not over-modern and fabulously grooving, comes into its own on the new and third album in all its intense splendor - brute proclaimed by exceptional vocalist Marc Doblinger.

Selected bonds in the classic '80s sports of this style round off the whole thing in all ear-friendly fluid. 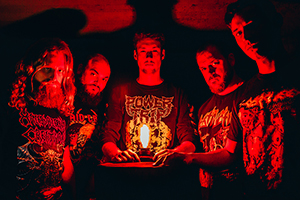 Founded in 2009, MORTAL INFINITY underwent an equally constant and interesting maturing process in which the band incorporated elements from the last Thrash decade before the turn of the millennium. And the fact that diverse, up-to-date Extreme Metal influences are allowed to let off steam unhindered lends the efficient dynamics of the five-piece a remarkably jagged note.

One of MORTAL INFINITY's other specialties are well-dosed, skillfully sophisticated melodies that can make true genre hits out of some tracks through the catchiness that is achieved.

MORTAL INFINITY definitely stand out from the mass of today's Thrashers with "In Cold Blood" - and they do it without cramping. After all, who has such a huge heart for the underground and the original rebellion of this musical branch can also do a lot with it. (Markus Eck)


When rats reign
On June 10th 2019, MORTAL INFINITY presented their new, official lyrik video for the song "Fellowship Of Rats".

The band itself presents the thematic background to "Fellowship Of Rats" without superfluous words, coming straight to the point:
"When greed gets out of hand, when it's all about strengthening one's power - completely without regard to everyone else. If you're trying to buy your own clear conscience with designer suits, chic cars and big bank accounts."

The music video was produced by Schrankenstein Media. The Bavarian band itself presents the thematic background to "Misanthropic Collapse" as follows:

"Where this passionate and intimate hatred of the self stirs, the urge to self-destruct that rages in some beings, may have different reasons for each person. The result is always the same: if one declares oneself an enemy, one often only has to flee from the environment, away from society, values ​​and morals and into a self-created, gloomy, sad parallel world. As the saving window slowly closes out of eternal black and threatens to collapse, the battle rages against one's own, inner demons."

MORTAL INFINITY are available for interviews via phone, Skype & e-mail