8 / 10
"… a breath of energy to sway the skeleton, that is, and shows that these Germans have it all …"
(Metal Mind Reflections)

7,5 / 10
"… a pleasant meeting with a new band … a perfect and irresistible mix between Danzig, Mötley Crüe and Rob Zombie … vocalist Postel leading the apocalyptic zombie quartet like a new Glenn Danzig … absolutely professional production … 'Hell Over Salem' is recommended for lovers of Horror Metal, Gothic Rock and Hard Rock stars, and represents for the band a start with a bang …"
(MetalEyes.IYE)

70 / 100
"… full of talent and ideas … with an theatrical and talented vocalist … they deserve respect and attention … a perfect product, maniacally …"
(Loud And Proud.it)

7 / 10
"… immediately animates to raise your fists ... decent horror vibes underline the dark side of power ... every single song is a very entertaining affair, with neat ass-kick components and lively rhythms."
(Rock Castle Franken)

7 / 10
"... makes real fun ... refuel nasty leaded gasoline into their 'Rock'n'Roll Machine' ... the LORDS OF SALEM do not need to hide from their international counterparts."
(Bleeding4Metal)

3,5 / 5
"… a fresh, timeless style of this music ... the listener of classical orientations is basically called upon to listen to the material here ... decent, Brainstorm-oriented Power Metal inlays, with noticeable Hard Rock of the American style, allow a good entertainment ... shows the troupe willingly that they know how to put up with their own energy-eruptions ... the modern advanced Heavy / Power Metaller can discover a lot for himself!"
(Metal Underground.at)

"The band, in which Pussybats bassist Marple Martin is a member, is something of the endtime edition of a Rock’n’Roll formation. However, that does not mean that the gentlemen sound as if they run out of steam soon. On the contrary. The tank is well filled and 'Zombie Monkey Woman' is a number that could also run in the car radio of Mad Max: dry, a bit crazy and full on the twelve."
(Sonic Seducer)

"… that pops! The four songs have impressed me really heavy! Wow, Rob Zombie personally would let LORDS OF SALEM fly in as support with a shoulder bump!"
(Flyflew Radio)

"… it brought to mind other musicians, such as Wednesday 13 for one, and The Misfits for another … their combination of Rock n’ Roll, being just that, but their energy screams Horror Punk Rock as well … so much angst, energy, and aggression, it never fades away but remains constant at all times even."
(Natalie's World)

"… vocalist Postel, a powerful and highly-expressive front-man that is easily the biggest selling point of this up-and-coming group … Goth-laden/Horror Rock-infused Hard & Heavy Rock/Metal … catchy material … filled with great hooks, inspired-samples, and colorful lyrics … a short and sweet EP, this release should find a huge fan base …"
(Heavy Metal Time Machine)

"… slamming down the point with switchblade guitars … an original concept and fun songs, a shining yet dark production, and relentless Rock 'n' Roll make these Lords ready for Metalheads and Rockers everywhere."
(Vile Views)

"… a proper portion of end-time mood a lá Mad Max ... something else and really worth listening to!"
(Breakout)

"… carved into stone with grooving riffs … a epic journey … filled with some absolutely brilliant vocals and riffs … a pounding groove machine."
(The Median Man)

"… damn good … slams hard! Very distinctive, harsh, loud in your face sound … great structure, riffing throughout … played with grit, conviction and fucking drive … awesome vibe going for it with great dynamics … some of the best punk rock n roll I have heard of recent … do I recommend this group? Damn, right I do."
(BallBusterMusic.com)

"… Fans of bands like Lordi and Danzig, who also love a splash of Kiss and Mötley Crüe, should definitely listen ... no wonder Rob Zombie wanted to have the boys as an opening act."
(Crossfire Metal)

"Pure Rock n’ Roll, without big trimmings and with a simple and straight approach … a work worth of notice where we can listen a sonorous revival that doesn’t sound dated, despite the obvious classics influences … the mixture of several rhythms with that dark aura Rob Zombie style and Lordi’s fantasy ended up well, resulting in 4 energetic and groovy tracks."
(Metal Em Portugal)

"... solid kick-ass Rock ... with a high roar with-factor ... high recognition value ... good sense for melodies and groove ... also in terms of sound and craftsmanship everything is in the green area ..."
(Orkus)

"... a filthy but modern version of Rock 'n' Roll, with roots in the Hard Rock of the 80s … they describe themselves as a mix of Kiss, Danzig, Mötley Crüe and Lordi, and I can agree with that … pleasantly enjoyable … quite catchy and certainly vocally this is strong … I think they might be able to raise their eyes in America."
(Hell Spawn)

"… bites with catchy music elements such as vocal choruses … 'Monster Girl' and 'Hell Over Salem' are just perfect to air them in the radio … unbeatable tunes … LORDS OF SALEM give it to you in your face … could whistle their songs under the shower … sounds awesome … you should like the record too, if you dig bands like Rob Zombie, Rammstein, Kiss ..."
(Monarch Magazine)

"... the interplay between the clean vocals of Postel and the fine 80s sound spreads a good feeling ... a great mini-album ..."
(BadBlackUnicorn)

"I can see pieces of Alice Cooper all over … a really good EP … everything is well played … I greet the next chapter with open arms."
(Honest Rock Reviews)

"... has some hit potential on the first run through ... mature and sophisticated ... horror charm ... goes forward well ... stomps and hisses, rocks and rolls ... very professional ... the songs rock and ignite immediately in the ear …"
(Hellfire-Franky)


LORDS OF SALEM will release their digital single "Devil Girl From Mars", on June 24, 2021 through all streaming services: 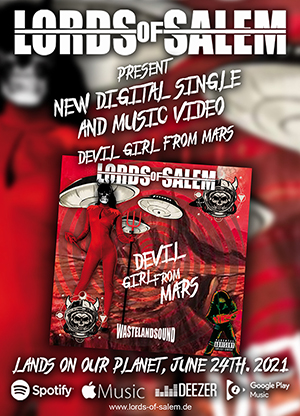 
Backflash:
When an equally rough and pally end-time bunch brushes ‚DEAD POP SEX ACTION‘ as a musical style on its skull-embroidered Rock'n'Roll flag, it's time for a collective uproar!

And if those passionate tattoo maniacs in their ratty rags also look as seriously determined as the LORDS OF SALEM - freaking f***ing yes, then of course, you‘ve got to pump it up a whole lot louder!

In the middle of the tasteless, barren no-man's-land of the diluted mainstream, the charismatic four-piece strikes in the scene. LORDS OF SALEM let a massively invigorating overdose of the spark spraying 80s HARD ROCK flare up out of the amplifiers with the EP "Hell Over Salem".

Electrifying songs come to life with a beguiling dark-occult touch. Lascivious, tongue-in-cheek songs that could not possibly be firmer, juicier and more compelling. 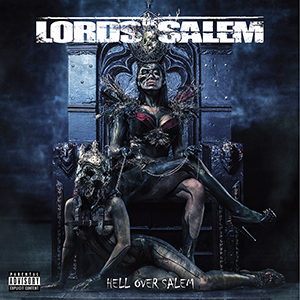 The EP "Hell Over Salem" was officially published on October 31. 2018.

On January 11th, 2019, LORDS OF SALEM presented their official music video for the title song of the EP.

The video was produced by bass player Marple's own production company FabrikDrei / Marplepixx. Filmed by Miguel. The cut was arranged by PADI of Nightfall Entertainment, a close friend of the troupe.

The casual thoroughbred rockers are saying about:
"We do not need big, inflated words to say anything about it. What we want to convey as a band is, after all, the good old spirit of eternal Rock'n'Roll, and that with an explicit 'All Night and Party' factor!"

As a marketing strategy, fraudulent cunning fashion rockers, pseudo-rebellious leatherjacket-weekend-wearers, unspeakable trend-clowns and other little softener-boys are tearing holes in their new jeans, like to call that kind of appearance and music-making 'vintage' and thus are queuing up rather pettily into an artificial genre zeitgeist. 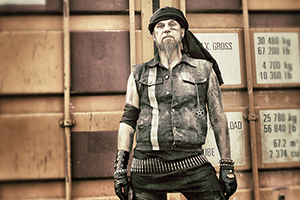 However with the four incurably decibel-addicted LORDS OF SALEM, it's just pure genuineness, deepest conviction and ultimately haunting reality!

The timeless LA sound of the conspired heap around exceptional singer Postel dances ominously rapt, but deliciously frisky on a damn stable foundation that rivets the enormously powerful formation of guitar riffs that drive straight into the bones, hellishly hot with greedy pumping power drumming. 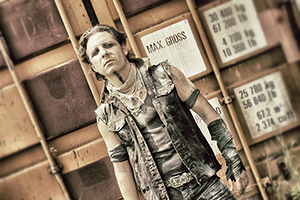 A dash of Danzig, a thick dose of Kiss, a poisonous injection of Mötley Crüe and a thick splash of Lordi refines the efficient formula.

The interesting band cross references are one thing, the other is the profound individuality of the crisp, yet also atmospheric material of LORDS OF SALEM! 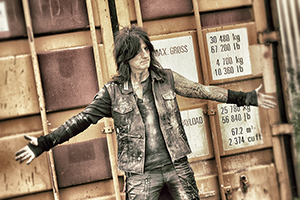 Four intuitively-unerringly composed, enthusiastically performed and magically catchy bitchin‘ tracks are being pounded into your ears, which you won‘t forget. 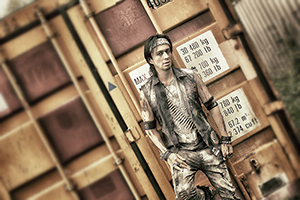 LORDS OF SALEM are available for interviews via phone, Skype & email