At the dawn of a new decade, while the world faced the global pandemic rendering all previous plans obsolete, KING SATAN started working on new material more determined than ever.

The first result of this will be presented to the world with a brand new Single and Music Video titled "This Is Where The Magick Happens" worldwide. Premiere: May 27, 2021.

King Seth Aleister Satan, vocalist & director of the new music video, comments:
"The world peaked in the year 1999 and it has been downfall ever since, so I wanted to take this 90’s exploitation much further than before in order to relive those summer hits! And of course, all filtered through our own style and the message of anti-conformity, spiritual anarchy and hunger for enlightenment. There might be or might not be a story of symbolic allegory in the video, making references to various influential thinkers from Socrates to Aleister Crowley and everything between, adjusted into modern times. But most likely I want to say these things only for the keywords for search engines cos people don't read these statements anyway to the end. PS.: Nietzsche." 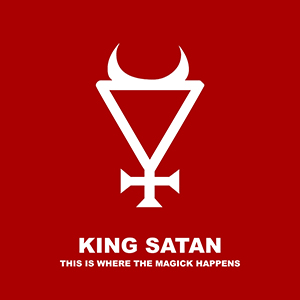 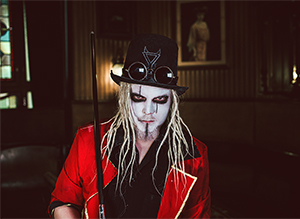 The group’s non-conforming brand of extreme Metal is perhaps best defined by their tendency to combine the topics of Satanism and Occult philosophy together with carnivalesque exploitation and blasphemous dark humor.

Nonetheless, the group’s over-the-top musical style follows no genre-boundaries either, as it draws its major influences from electro-Industrial and Death Metal just as casually as from the areas of Dance Punk and various symphonic elements.

While the act started as a solo project of the vocalist and multi-instrumentalist King Seth Aleister Satan, it has then evolved into a live show-oriented group with a full line-up, and to this day has released two full-length albums "King Fucking Satan" (2017) and "I Want You To Worship Satan" (2019). 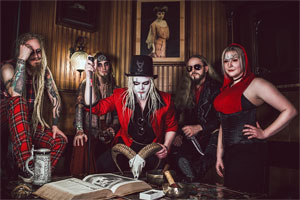 [ Behind the scenes photo with actors by Joonas Juntunen ]


Although KING SATAN's roots are originally in the aggrotech based Metal music, the group started incorporating more live band elements into their stage performances while the years went by. Eventually most of these elements became permanent parts on the studio recordings as well.

Together with several singles and distinctive music videos directed by the band’s frontman the project has stirred lots of fuzz and controversy since the day one, while facing the acclaim, criticism, confusion and devoted following all at the same time.

It all led into singles reaching viral charts and ever-growing demand for live performances from which the band has become known for while touring in clubs and festivals in Finland and around Europe.

TRACK:
This Is Where The Magick Happens 04:30

KING SATAN is available for interviews via phone, Skype & email