90 / 100
"… clearly have put a lot of emphasis on keeping the songs stringent and highly enjoyable despite the instrumental prowess that can be found here … powerful and transparent … offers a lot to enjoy and while I am not 100 % sure which of their three outputs I like most this is a really great album."
(Metal Archives)

9 / 10
"… musical variety reigns … here you will find all the labels of extreme Metal … pleasantly surprised us if what you want is to enjoy music, then don't hesitate to get this great album."
(Metal Friends ES)

4 / 5
"In this Metal genre it's hard to be innovative or try something new nowadays ... INFECTED CHAOS offer as a counter-answer a wonderfully refreshing Death Metal wall of sound, which properly polishes your head ... technically flawless riffs and well-sorted melody arcs ..."
(MetalUnderground AT)

8 / 10
"... playful and tight ... but still remains catchy ... despite the old school attitude INFECTED CHAOS always stand with both feet firmly in the present ... their mixture of England, Sweden and the USA on the one hand and old and new school on the other hand ensures that the Austrians drive despite familiar elements a completely unique sound that knows how to convince throughout ... production is fat and powerful ... here just fits the whole package."
(Crossfire Metal)

8 / 10
"… modern, brutal and melodic Death Metal … good diversity between tracks, one can easily pinpoint each of them by a certain something, which is excellent in my opinion, although the overall impression is of a fast paced, brutal music … definitely a good effort …"
(Pest Webzine)

7,5 / 10
"… pissed off, dark and dynamic ... the frustration has found a good, creative outlet ... there is straight, sinister death steel paired with fitting melodies without frills and the one or other Black Metal-like riff ... all in all independent and catchy …"
(Bleeding4Metal)

10 / 15
"Then as now, the quintet focuses on mostly very melodic, but always hard-hitting death metal ... with the video release 'Gehenna' and the punk-meets-death'n'roll-feeling 'Iron Nights' two veritable hits up their sleeve ..."
(Legacy)

3,5 / 5
"… between the rocky Melodic Death with dark tones of Kataklysm and Hypocrisy and a Blackened Death with a strong central-European matrix (God Dethroned, Hate) … very interesting … well combined … a more than good work …"
(All Around Metal)

"Richly textured, wonderfully brutal, and aggressive as hell, the sound on 'Dead Aesthetics' is masterfully artistic and powerful. The album is a wonderful musical journey into darkness and violence that combines contemporary Death Metal with the sensibilities of old-school influences."
(Brews And Tunes)

"… delicious from head to toe … I know the term delicious might not be appropriated for an Extreme Metal band but the thing is that I can’t help it … I had such a great time listening to the album and the word that comes to mind is delicious, not putrid, not decayed, not rotten."
(Metal Addicts)

"... merciless Death Metal in pure culture, with bludgeoning drums and varied growling, which leads a conflict between high and low, whereby the creepy low is in the foreground ... Variety arises from imaginative guitar riffs that provide in between for short loosening up ... so who likes it hard as nails in the auditory canals, is with 'Dead Aesthetics' at the right address ..."
(Metalmamas Neuigkeiten)

"… by far their most intricate, obscure and dynamic album to date … showing not only the evolution in their musicianship and fury, but also that Austria, and of course the southern parts of Germany, are indeed an amazing source of musical brutality … a brutal, slammin’ and utterly awesome Death Metal raid … mercilessly …"
(The Headbanging Moose)

"The opening riff of the opener 'When Yonder Calls My Name' immediately makes us understand how much the band looks to the north, in particular to Sweden and to that sound that gave birth to Hypocrisy, Dismember and the first Amon Amarth, among others … worth listening to because its destructive charm is undeniable … well played, well produced and flows very well …"
(The Murder Inn)

"... praise for the arrangement of the songs ... balanced ... the strengths of the band ... these include the vocals of Christian Fischer, who growls deeply and powerfully ... a varied and independent death metal album that deserves attention ..."
(Vampster)

The band comments on the background of "When Yonder Calls My Name":
"The song contains the first lyrics written for 'Dead Aesthetics'. Thematically, it's about that very special moment when you realize that this existence is now over and a new journey begins. The call of the afterlife becomes louder and louder and the spirit dives into completely alien spheres."


The Austrian-South German Metal commando INFECTED CHAOS holds a giant mirror right in front of the rotten, perverted part of humanity. Yes, the truth, it is painful.

Creatively, these hard steel enthusiasts are just as ruthless, and that hits like a forge hammer on an anvil!

The delightfully rough riffed and at the same time really colossally rhythmic DEATH METAL of the perfectly coordinated shock troop shows itself on the new and third longplayer "Dead Aesthetics" from the most varied and most coherent side. 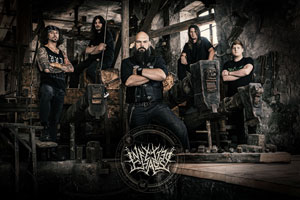 
A huge plus for these guys:
INFECTED CHAOS combine the brute force of contemporary, complexly poured death lead with a touch of US-American New School and the rich, timeless musicality of icons like the genre's forefathers Death. Real killer solos included.
And exactly this circumstance makes the highly explosive mixture of the quintet a real feast for those gourmets who want it as raw and nasty as compositionally and technically skillful. 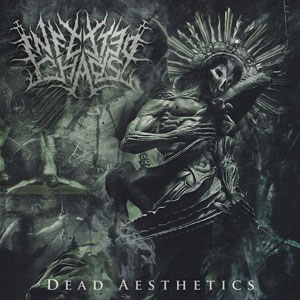 In 2013, five experienced musicians from Tyrol and Bavaria come together to indulge in the more brutal styles of Metal in INFECTED CHAOS and soon define their own style of melody, harshness and a few more modern elements.

Already in 2015, after extensive live tests - among others as opener of the godfathers Possessed - the written material is put on record in the renowned Iguana Studios. The raw, first album "The Wake Of Ares" can bring in very good resonances worldwide and celebrates all the strengths of the still young band.

After numerous live gigs in Central Europe, INFECTED CHAOS board the studios again in 2017 only two years later to realize the second album "Killing Creator". Where the chainsaw ruled on the predecessor, the scalpel now reigns supreme. A much more differentiated sound and more complex structures characterize the new album.

With two albums in the luggage INFECTED CHAOS move but once again on the live front. Numerous gigs and festivals, including the well-known Metal Days, Winterdays Of Metal and Aaargh!!! lead the band through Central and Eastern Europe, where new friendships are made, but also sacrifices are demanded ...

After turbulent years, the band finally gets back to songwriting with a renewed line-up, but this is abruptly thwarted by CoVid. The border closures prove to be a cruel test of patience, but giving up never becomes an option. Meanwhile INFECTED CHAOS are finally back in the band's own studios to finish the third album "Dead Aesthetics".