Time travel up to date

90 / 100
"HARDLAND show their creativity fused the chords of classic rock with the synthesizer and keyboards creating an interesting proposal that will keep you attentive to each of their songs."
(Darkzen Dragon)

9 / 10
"… naturally melodic … HARDLAND are yet another example of just how much quality music there is in the Netherlands at the moment … great stuff."
(Wild Spiritz)

85 / 100
"… HARDLAND have no problem doing what they want … in a reference to Faith No More or Rage Against The Machine … goes through progressive moments to Dream Theater … creates rocky landscapes to U2 until they settle in a Hard Rock inspired in the 70s and 80s … unique mix that shows a collective with creative ability and musicality."
(Via Nocturna)

80 / 100
"… with a contagious and happy sound … properly alternative, with a great variety of rhythms and a great difference between one track and another … clearly represented between the songs 'Dazzled By The Presence Of Love' with its modern Rock and 'Love Love Love' with a ballad style like The Beatles, so distant but so pleasant at the same time …"
(X Reviews)

8 / 10
"... here the arrangements are perfectly worked out ... the playing technique is on the highest level ... very strong tracks ... catchy, diversified and yet sophisticatedly arranged ... convince with a progressive touch ... an incredibly strong performance ..."
(KOBZR Magazine)

75 / 100
"… HARDLAND brings catchy music with which they will undoubtedly score live … due to the wide influences there is enough variety to fascinate."
(Hellspawn)

74 / 100
"… positive feeling … the group knows how to fascinate … HARDLAND is an asset to the Dutch Melodic Rock."
(Metalfan NL)

7 / 10
"… very solid album on which Melodic (Hard) Rock still predominates, but on which time and time also nice experiments are made with alternative influences … there are also a number of songs on 'In Control' that will certainly appeal to traditional Rock fans."
(Arrow Lords Of Metal)

7 / 10
"… also shine with their joy of playing ... a Hard Rock band that should appeal more to demanding listeners than easy listening consumers …"
(Crossfire Metal)

7 / 10
"… they have something in their very traditional melodies, in the wave of Hard Rock of the eighties but then they also have an alternative feeling very typical of the nineties … really good, an excellent surprise …"
(World Of Metal)

"… HARDLAND has taken multiple musical risks on ‘In Control’, adding seventies synthesizers sounds into the mix together with more contemporary Rock … in a way musical daredevils … served with a twist and some spin … for the more adventurous type of rocker something to dive into!"
(HeadBangers LifeStyle)

"… keeps you interested from the first minutes … classic but also alternative … a rock band unique … very mainstream, very danceable, definitely playing on several radios on the planet … HARDLAND rock and roll over and over again …"
(Noizy GR)

"… riffing starts well since the opener 'The Nation's Biggest Enemies' … 'The Powers Within' is a great piece of pure Hard Rock, really a bomb! … an album that amply deserves the sufficiency, because it is well played by capable people …"
(The Murder Inn)

"… definitely worth to be taken out into the world ... has a fabulous charm, which causes goose bumps ... a damn good, and varied album …"
(Bad Black Unicorn)

"... you can quickly hear that HARDLAND come across more multifaceted ... skillfully combine the sounds of the 70s and 80s with modern ones and bring them back to the present ... striking melodies, sonorous, rocking guitar playing, playful keyboard parts ... varied vocals ... an album that could reach cult status ... it has what it takes."
(BlattTurbo)

"This is definitely one for lovers of Hard Melodic Rock and 80's inspired Classic Metal."
(Radio Airplay Blog)


On February 9ᵗʰ, HARDLAND released the fourth music video for the album "In Control:

Guitarist and vocalist Aeilko comments regarding the actual story behind the "Rise And Shine" video:
"We noticed that it has become our most streamed song on Spotify, over 10.000 streams. We felt it would be cool to thank the streamers with a clip for the song. When I started thinking about a script for the clip I realized the time we're in now, this worldwide pandemic, and how long it has been keeping the world in a stranglehold. I thought to myself, what if we use the song 'Rise And Shine' in a way of looking at what's going on now and how we all need and look forward to Rise and Shine and try to get life matters back into our own hands. And defeat this virus. One thing lead to another ... I talked to our director and he got all the footage for the clip, we added a few shots out of our personal home archives and there you have it ... our way of giving everyone hope for a better future again ... one without Covid-19! In which we all need to Rise and Shine, but for now ... let's all stay safe and healthy!"

On December 3ʳᵈ 2020, the Dutch released their Christmas song "Merry X-mas Everybody", which the band followed up with the music video on December 18ᵗʰ:

The catchy, animating to swing-along track was originally performed by famous British rockers Slade in 1973.
Guitarist Aeilko informs about:
"We updated it into a HARDLAND sound with a capella intro and Beatle-esque vocal middle section. We asked and got permission from SLADE after sending them the rough mix of our version. They loved it. To us this is the only Christmas song that matters, that's why we picked it." 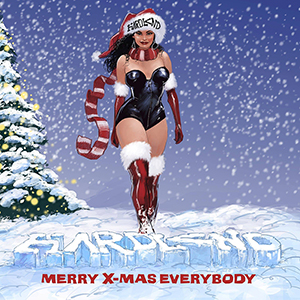 Since October 31ˢᵗ 2020 Hardland HARDLAND present another music video, this time as a special Halloween version of the song "Haunted":

On May 21ˢᵗ 2020 the ambitious band released its new music video for the song "Dazzled By The Presence Of Love":

"In Control" is the title of the second album by the Dutch rockers HARDLAND. Even more than with the self-titled debut of 2017, the band has managed to create a completely different MELODIC ALTERNATIVE ROCK sound from very different influences.

This ranges from Heavy Rock, AOR over 80s-Wave to accessible (Power)Pop, with a special love for music from the 1970s and 1980s.

The very well done cover "Are Friends Electric", which was a big hit for the British synthesizer formation Tubeway Army in 1979, further underlines this. "In Control" otherwise only contains own compositions: hard Rock songs interspersed with a single ballad.

HARDLAND's story is something special anyway. The band started as a project by the two singers and multi-instrumentalists Aeilko Venema and Paul Evers. The two musicians shared the same musical preferences, started working on songs together and finally felt the need to record them in a studio. In 2017, the first long player "Hardland" was created, which was mainly recorded with friends of musicians.

Quality immediately had top priority: veteran Sean Magee took over the mastering at the legendary Abbey Road Studio in London. He worked with greats like Rush, Gary Moore and Deep Purple, but was booked by HARDLAND primarily for his collaboration with Pink Floyd, David Gilmour and The Beatles. Thanks to Magee's contribution, the first CD immediately developed an international appeal. 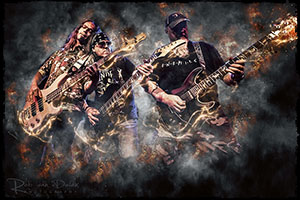 On May 18, the current album successor "In Control" was preceded by the single "The Nation's Biggest Enemies", which is also the opener of the album. The song was immediately positively received and supported by Rock Rage Radio, one of the largest Rock stations in America.

In the continuation of the musical history of HARDLAND, the best of the 1970s and 1980s is once again transformed into the present:
striking melodies, varied vocals, beautiful keyboard parts and tasteful guitar work.

And this time there is the whole thing from a real band, which has now optimally merged. Although the main tone of the music is once again determined by rock-solid, classic (Hard) Rock, HARDLAND deliberately deviates from it several times - for example with the cover "Are Friends Electric". Or also with a song like "Love, Love, Love", in which the fascinating spirit of the good old Beach Boys and their tears roams in the morning.

"Everything comes back in our sound universe", says Aeilko. "We love giants like Led Zeppelin, Journey and Whitesnake. At the same time, we have a weakness for songs that were produced in the 80s by unforgettable acts such as Tears For Fears, Talk Talk and Tubeway Army. In the choirs of certain songs on the second album you can also hear that we really adore the polyphonic vocals in which the Eagles as well as Crosby, Stills, Nash and Young were so immensely good. Yes, the list of musicians and groups that inspired us is endless." (Markus Eck)

HARDLAND are available for interviews via phone, Skype & e-mail