7,5 / 10
"While the templates are quite dark, DRUNKEN FOOLS shine in so far as they sound much more cheerful and medieval ... the music is beautifully harmonious and dreamy, the production crystal clear and transparent ... I could also imagine them as a live act on medieval markets, because they create a nice campfire atmosphere with their music ... very independent and interesting!"
(Crossfire Metal)

7,5 / 10
"… atmosphere, down-to-earthness and charisma ... DRUNKEN FOOLS has enough of that ... a charm all of its own ... very likeable at first sight ... ballad-like moments and homely campfire romanticism spreads out in many passages of the album ... this circumstance immediately allows comparisons with possible medieval bands ... a fool, who doesn't get drunk with warmth because of this grace and the very own charm of the band ... here the heart's blood seeps through all pores and one would like to call out to the girls and boys not to change or bend in the future."
(Rock Castle Franken)

"Here’s a refreshment for all of us … a marvelous album … the band I found that has a similar sonance is, believe it or not, Jethro Tull during the 'Crest Of Knave' era. Of course, without the flute thing … delicious and well-played songs … thirteen delicious tracks …"
(Metal Addicts)

"The voices of Maleen and Sönke harmonize on all levels ... the melodies are mature down to the smallest detail and lovingly arranged ... a more than round musical experience ... this band deserves to be noticed ... my secret tip of the month!"
(Orkus)

"The band scores with honest and serious music ... terrific ... with heart and mind ... is worth it!"
(Bad Black Unicorn)

"The CD is a bang, I really enjoyed listening to it!"
(Hazzard Of Darkness)

"… for friends of pleasant, melodious rock sounds ... that DRUNKEN FOOLS use two singers at the same time is a good decision, because it results in a very complex singing ... I would recommend this record to all those who like to be entertained by softer sounds and have a faible for Rock!"
(Metalmamas Neuigkeiten)


A completely 'normal' and completely human band - does that still exist? Especially in times when an elaborate image and cleverly conceived marketing etc. seem to dominate everything else.

Schleswig-Holstein based DRUNKEN FOOLS give a very personal and unique answer to this important question with the 2018 album "Escape", which is available on all streaming and download portals.

In 2020, the musicians from Hamweddel set a not quite common, notarized world record. In concrete terms, this is the amount of artificial blood per minute used in a music video. (!)
No less than 54 liters per minute were consumed.
In the course of the promotion for a concept album which is expected to be released in early 2021, the combo produced an elaborate music video for the new song "Blutnacht".
The entire video project was amateurishly produced, with the help of volunteers: 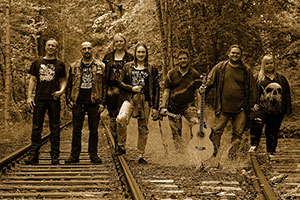 DRUNKEN FOOLS, consisting of Sönke Martens (guitar and vocals), Maleen Stangier (vocals), Jasmin Grünau (keyboards), Viola Dolenc (violin), Frank Hauschildt (bass), Marcus Junge (drums) and Sebastian Reimers (technical equipment), implement the idea of video producer and director Fritjof Heyn from Marne. The horror film fan created the concept and refers to the B-movie classic "Braindead" by Peter Jackson: "I calculated how much blood per minute was used in 'Braindead'. We have to beat this figure to shoot the bloodiest music video of all time", genre-enthusiast Heyn says about the unusual project. 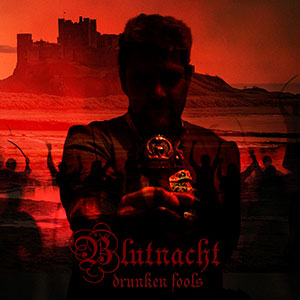 The lyrics of "Blutnacht" describe the night before a medieval battle. The fighters celebrate properly and drink themselves courageously for the coming day.
"The whole concept of our new album is based on the books of Bernard Cornwell, which were already filmed in the TV series 'The Last Kingdom'", tells singer and guitarist Sönke Martens, who wrote the lyrics for the music. The story is set in England around the year 1.000 AD. 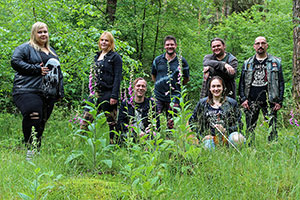 The video shoot itself required a lot of effort - especially for an amateur band. Among others, the group secured the cooperation with Carsten Delle from Haale, who has already been an extra in various TV productions and can provide a huge stock of medieval props.

DRUNKEN FOOLS record the whole upcoming album in the Holstein recording studio in Seefeld. In close cooperation with its owner, music producer Allan Murdoch (Ex-Highlander, Ex-Message), the basic framework for the new tracks is currently being created. It is planned to release "Blutnacht" initially as video and single in advance.
"The cooperation with Allan takes our music to a whole new level. We will sound harder and more rocking than on our last release", drummer Marcus Junge reports. 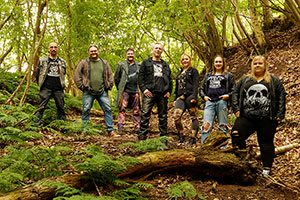 DRUNKEN FOOLS - to want to derive from the entertaining band name immediately rashly on permanently thirsty fun birds, would be fatally mistaken.

Because as the extremely likeable ATMOSPHERIC ROCK quintet around the two voices Maleen and Sönke proves with the album title song "Escape", their songs are thoroughly infused with seriousness and depth. To this touching song, which comes along in an intersection of the sounds of Sisters Of Mercy, New Model Army, The Cult and Fields Of The Nephilim, an official music video was presented on November 20, 2018.

Together with the local photo studio Gemke and 4K-Filmproduktion, a professionally produced clip was created that perfectly reflects the band's attitude towards life:

In the small and contemplative town of Burg in Dithmarschen, the first rehearsal room was then lovingly set up, small performances in pubs followed. Full of zest for action one was willing to show the big Rock world out there that one also had something to offer. Innumerable underground formations were founded at the same time, which so often disbanded just as quickly. DRUNKEN FOOLS but still exists. That alone speaks volumes, it can be said.

When the first CD "Auch in Dir" was released in 1997, DRUNKEN FOOLS set their foot in the big wide Rock genre for the first time. The average age at that time was just 15 years. 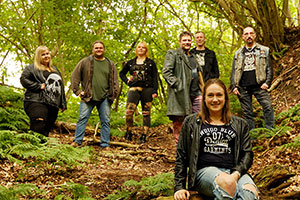 Obligatory changes in the line-up did not at all detract from the stability of these wonderfully relaxed musicians. Drummer Marcus and singer Sönke even wrote the club anthem for the local soccer club SV Hochdonn. The song is still performed at all home games of the strong footballers, so they stick together everywhere.

However, it was to take until 2014 before things really came to life again. Marcus and Sönke teamed up with Martin Lübker, who from then on put on the bass guitar for the group.

Together they rediscovered the good old, proven songs of DRUNKEN FOOLS. Two years later there was even a rejuvenation cure: keyboardist Jasmin Grünau and singer Maleen joined and the band decided to record another new longplayer. 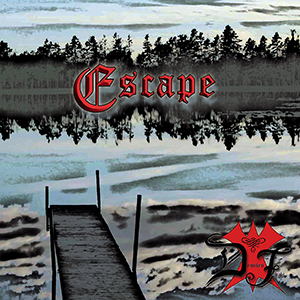 The result is the 2018 CD "Escape" - a mixture of new recordings of 20 year old songs and some new compositions, which is worth listening to all around, because it works immediately and smoothly.

The second album "Escape" was officially released on December 01, 2018.

Of course everything was reinterpreted. This stylistically in all respects unusually independent disc was recorded in the rehearsal room in Hamweddel, together with the distinctive campfire feeling that gets under your skin.

Competently mixed and suitably mastered by Kalthallen Studios in Nachrodt-Wiblingwerde, the sound of the album unfolds a lastingly charming, incredibly organic and pleasantly soulful aura, which one should simply enjoy authentically and relaxed according to the nature of the songs.

And since Sönke's percussion guitar is omnipresent in almost all songs, many a track goes straight to your stomach and legs.

This way the circle closes harmoniously. The at the beginning mentioned, relaxed naturalness of the appearance of all band members, the heart-refreshing naivety and the insatiable passion for the music are finally another important aspect of creating the simply lovable DRUNKEN FOOLS. And this is exactly how it can, should and will continue to be. (Markus Eck)


On February 03, 2019 the band released the lyric video for the album song "Teufelsgesicht:

DRUNKEN FOOLS are available for interviews via phone, Skype & email