Out of weighted gloom

5 / 5
"… wonderful … I absolutely love this album … it's amazingly crafted … Seraina's vocals are beautiful and the added growls from Chris, sets them apart from the rest of the crowd … besides, beautiful lyrics and vocals … the album is also full of incredible riffs … a must for fans of operatic female vocals or basically anyone who is a Metal fan."
(Music Madness)

85 / 100
"… a pleasant listening album, which runs well into the listener's ears, track by track like crystal clear water for a thirsty customer, especially after half of the disc where the group dares to experiment with different technicalities and atmospheres of music in track and coming out of winners."
(Insane Voices Labirynth)

8,5 / 10
"The production on the album is some of the best I have ever heard, clean, crisp and clear, while the band employ light and shade, as well as plenty of time changes … should appeal to fans of Nightwish and Evanescence and I for one, have really enjoyed it."
(Metal Gods TV)

80 / 100
"… great job … good combination of sounds and styles … Goth with style to the old school like Theatre Of Tragedy for example, between Symphonic Metal and operative by the vocal handling … very much balanced … original."
(Dark Zen Metal Angels)

8 / 10
"'Reflections Of A Nightmare' can grab most Dark/Gothic Metal followers who prefer strong guitar riffs and a heavier atmosphere against the symphonic strains."
(Dead Rhetoric)

78 / 100
"Good job DREAMS IN FRAGMENTS! An album to suggest."
(Hardrockheavymetal)

7,5 / 10
"… singer Seraina Schöpfer impresses ... the rocking 'The Maze' could also be from an album by the Dutchman Delain ... fans of Melodic / Symphonic Metal should listen in this album."
(Rock Castle Franken)

7,5 / 10
"… features fairly Dark Metal with influences that you would rather expect in the Doom Metal corner … own sound … with singer Seraina Schöpfer, the band has a lady with a special voice … beautiful gems … how cool that this is done so boldly … take the beautiful vocal lines and you get something impressive … a neat debut!"
(Lords Of Metal)

7,5 / 10
"… singer Seraina Schöpfer with her pleasant voice timbre … fans of Melodic / Symphonic Metal should listen to this album."
(Metalheads Forever)

7,5 / 10
"... rather refers to the dark beginnings of the genre with growls, dark harmonies, heavy guitar chords, and rather sluggish songs instead of sugar-coated plastic trigger drum-shifts ... pleasant voice of front woman Seraina harmonizes perfectly with her male counterpart Chris ... dark, epic magic ... noble debut, which finally offers unclouded fun in this category."
(Streetclip)

7,5 / 10
"... surprisingly modern and rather gloomy ... there are additional Death Metal growls, as in the case of the Norwegians Theater Of Tragedy or Lacuna Coil ... also bands like Amaranthe or Delain left clear traces here ... the clean production puts all facets of the music in a well fitting light."
(Crossfire Metal)

72 / 100
"That the current foursome ... has already gained experience in other bands can be heard in the beautifully constructed song structures …"
(Musika.be)

71 / 10
"… the angelic voice of Seraina Schöpfer, who represents the dreams, crosses with the strong and almost always introduced precepts of Christian Geissmann, which marks the devastating position of the nightmares."
(Via Nocturna)

10 / 15
"... strong melodies ... 'The Maze' makes use of Nightwish without restraint, but is an absolute catchy tune, as well as the following 'Incomplete' ... noteworthy is the performance of singer Seraina, which confidently voices high and highest pitches cleanly ... immaculately recorded."
(Legacy)

7 / 10
"An album to be included in a beautiful and juicy discography of Gothic / female voice !"
(Giornale Metal)

7 / 10
"… Seraina’s light, operatic vocals, Chris’ powerful growls, and the dream-like backing orchestration, DREAMS IN FRAGMENTS have set themselves apart even from such bands that use the ‘beauty & the beast’ approach like Leaves’ Eyes or Epica … a pretty good Metal album … fans of Nightwish, Sirenia or Within Temptation will surely find some things to like about this album."
(Lyrical Spell)

7 / 10
"The bombastic orchestra is combined with some exciting guitar riffs, topped by a slightly operatic voice of Seraina, who does a great job here."
(Metal Maidens)

14 / 20
"… a driving and sensitive offering … conducive to a well headbang … diversified on the atmospheric, rhythmic and vocal levels … reveals a great creative impulse … testifying to a real technical potential and a nice net of feminine voice …"
(Spirit Of Metal)

"… should be checked out by true, die-hard, love-it-all collectors of all things Symphonic Power Metal."
(Metal Bulletin)

"… they’re their own unique brand of awesomeness mixed together in a defiant cocktail of anger and melody."
(The Median Man)

"… all musical parts seem to be more equal ... singing and music working more as an unity ... this is very pleasant to listen to …"
(Amboss)

"... DREAMS IN FRAGMENTS have neat instrumentals ... as usual for Symphonic Metal bands. For that matter, 'Reflections Of A Nightmare' was built up with stronger than usual guitars that overlap keyboards, which generally is the opposite. Of course, there are keyboards passages, but they are connected with the song ..."
(Metal Addicts)

"... DREAMS IN FRAGMENTS is more about the comforting sounds. There is often an interplay between gentleness and rudeness, which provides a lot of variety ... many epic sound elements complete the whole thing, so those who like to be enchanted by beautiful tones, should risk an ear …"
(Metalmamas Neuigkeiten)

DREAMS IN FRAGMENTS are a very profound artist association that sounds like a healthy pursuit of serious music. 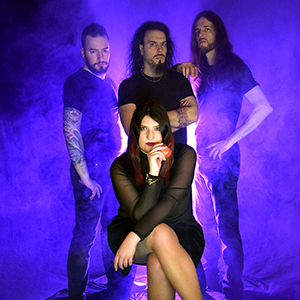 Due to their musical appearance, DREAMS IN FRAGMENTS have already been compared to popular formations like Nightwish or Delain.

However, the participants have no reason whatsoever to present themselves in the genre as a cover band, which merely plays the songs of the big, established success models.

Since the end of June DREAMS IN FRAGMENTS present the sonorous debut album "Reflections Of A Nightmare" to the world of heavy and longing sounds. 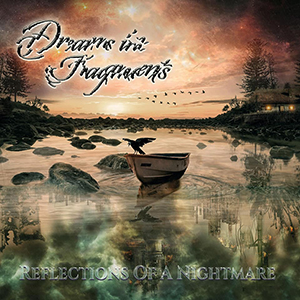 Seraina's completely natural, pleasantly unadulterated used voice, often subtly operetta-like and yet light as a feather, co-acts on "Reflections Of A Nightmare" in well balanced manner with Chris's beastly growl.

This type of performance differentiates the band from the mass of competitors in the same way it does the union of hard guitar riffs and gorgeous orchestrations.

DISCOGRAPHY:
2019: Reflections Of A Nightmare (full-length)

DREAMS IN FRAGMENTS are available for interviews via phone, Skype & e-mail