►►► Winner on place 1 of the Battle Of The Bands contest 2020 in Sonic Seducer music magazine!

9 / 10
"... captivates ... so extraordinarily well that one can hardly get away from it after intensive enjoyment ... impressive sound design ..."
(KOBZR Magazine)

9 / 10
"... one of those albums that will remain etched in my memory for a long time … COLDUN has raised a high quality standard at the instrumental and vocal level that envelops the listener in a musical atmosphere influenced by Doom, Progressive, Black and Post Metal that forces attention to detail and that fits perfectly with spiritual lyrics … an interesting listening experience full of emotion."
(Metal Gods TV)

9 / 10
"… aspects of Moonspell, Candlemass, Opeth, The Gathering, Sisters Of Mercy come to the forefront … has that epic Doom/Post Metal grandiose songwriting, bluesy/emotive lead breaks, and brilliant execution to take COLDUN to great places not just critically, but also win the hearts of music fans the world over."
(Dead Rhetoric)

9 / 10
"... impressive ... an atmospherically dense and captivating opus ... the musical level is consistently high, both vocally and instrumentally ... Coldun's voice can be described as exceptional in this regard and is a strong characteristic of the musical appearance ... a very strong album with intense emotional appeal."
(Metal-Heads DE)

4 / 5
"… the first thing you're instantly drawn to the deep, mellow and dulcet tones of founding member Coldun's vocals … production is fascinating in many aspects, in some ways you could be drawn into thinking that it was recorded in a church or cathedral as it sounds so cavernous and spiritual … has a brilliant warmth and ethereal emphasis in its production, augmenting the music and aiding in delivering the concept with absolute precision and perfection."
(Fjordhammer Music)

8,5 / 10
"… masterful vocals … crystalline and evocative … magical solos (between blues and heavenly melodies) with a very classic style and then turn to Post Black Metal hammers … a way of making music that is disappearing because of its ability to release heat without having to show its muscles … a real scandal that bands of this caliber should still be dispersed in the underground compared to dinosaurs that rage to the bitter end the charts … a little gem …"
(Book Of Metal)

84 / 100
"I feel a dire urge to discuss each song individually … because each song has its own feeling and comes from a different angle musically … yet the album is a coherent whole in which each song also fits within the whole … there is so much to discover … there is a lot of beauty lurking under the surface."
(Zware Metalen)

80 / 100
"… has a style and rhythm embodied in each song of Doom and soft Progressive Metal with diverse, emotional and dark settings, we can hear it in the most notable track 'Hail Out To Thebes', with a slight inclination to Melodic Black Metal … a depressive and dark album … moving and raw moments … good complete and emotional …"
(Darkzen Dragon)

8 / 10
"Melancholy and emotional … maintaining a smooth Progressive sound, while peaking with poignant moments that give you chills … Coldun’s vocals are as smooth as butter but can also roar like a caged mountain beast … really takes you on a journey to places in your mind that you might not be ready to visit, but he grabs them out of your recessed memories and places them right in front of you to face … get ready."
(Metal Temple)

8 / 10
"Right away, with the opener and title track 'Grand Sun Ritual', the band delivers the most emotional and poignant piece, where especially the chorus is completely to kneel down ... an impressive album, which of course benefits from Coldun's theatrical vocals, always underlined with a lot of reverb, but is also capable of a lot in terms of craftsmanship and songwriting."
(Rock Castle Franken)

8 / 10
"... remains not entirely tangible and comparable, neither with Katatonia or Tiamat, neither with Sentenced or Dark At Dawn. Surprise: It's COLDUN."
(Streetclip)

7,5 / 10
"... Doom Metal band with Post Rock influences ... mystical with ethnic sounds ... languid lava riffs ... melancholic, dreamy guitar melodies ... towering above it all are the soulful, epic and evocative vocals ... despite many different influences and minor gimmicks in between, however, the music always remains catchy and comprehensible ... an independent album that stands out from the great masses."
(Crossfire Metal)

7,5 / 10
"… melodies are strong … greater depth and a clear spiritual sense … a style that I enjoy to dip into from time to time, with bands such as Katatonia, Thence, Green Carnation, Saviour Machine, Beseech and Fields Of The Nephilim."
(DPRP)

7 / 10
" … elements that have been seen in the works of In The Woods, Godsend, the first Opeth, as well as echoes of Doom and Hard & Heavy of the 70s and 80s … Coldun has a characteristic voice, full of pathos, epic in the recitative parts of the verses … the vibrant pathos of the melodies, the vocals, make 'Grand Sun Ritual' an evocative proposal, capable of stirring the empathy of the listener from the very beginning."
(Metalhead IT)

3,5 / 5
"… COLDUN's dark, pensive and progressive voyage offered in 'Grand Sun Ritual' will undoubtedly please all fans of the more atmospheric side of Metal music, while at the same time also point to a more introspective path ahead of this excellent German act."
(The Headbanging Moose)

"… so atmospheric … excellent tracks that also have the merit of not repeating the same formula over and over again … highly recommended."
(The Murder Inn)

"Only with this album I discover this band and I can only regret this delay, because it is worth its weight in peanuts, I tell you in advance if you are a prog fan … like a fiery comet hitting your solar plexus."
(Metal Alliance)

"Holy Moly! What a deep voice! What a combination between the 1980’s Gothic Rock with Metal and some slight dashes of Extreme Metal and a bit of the 1970s … hypnotizes the fan from the beginning … here we have one more nominee for best album of 2021."
(Metal Addicts)

"Imaginative guitar playing ... varied sounds ... no monotony whatsoever ... perfectly suited for daydreaming ... very expressive vocals, with everything from high and hymnal to fervent growling, depending on how it fits best into the music ... the harder and softer parts always flow smoothly into each other, so that the listening experience is not marred by anything ... a lot of virtuoso guitar playing ... a real recommendation!"
(Metalmamas Neuigkeiten)

"… nothing short as magnificent: Coldun is one of the most technically accomplished vocalists that I've had the pleasure to discover for a long while … an album that will stand the test of time, without a doubt."
(Headshot Music)

ALBUM OF THE WEEK: "Embracing the avant-garde and the peculiar with a warm wholehearted embrace, COLDUN takes the wickedly weird to a whole new level mixing atmospheric Doom, Psychedelic Rock, traditional Metal and fuses it all with random passages of ethnic instruments to produce something truly phantasmagoric that will appeal to just about anybody and is entirely self-released for that independent as fuck attitude and swagger! Check it out and take the the most ridiculous and bombastic trip of your life!"
(ViaOmega)

"… like an early 90s Queensrÿche, when they would incorporate Pink Floyd motifs into an outer layer of progressive-ish Metal … Coldun generally employs a gothy baritone style, much like late-career Woods Of Ypres material, but then often lifting up to a soaring tenor … like some of Primordial‘s more majestic works … seven strikingly memorable tunes that any fan of Epic Metal owes it to themselves to check out."
(Valley Of Steel)


On December 26ᵗʰ, the band released the new music video along with the accompanying lyrics for the album song "The Forest And The Soul":

Frontman Coldun says, "It's about a transcendental journey in the transition between life and death, which is interwoven with the symbolism of the forest as a place of connection with creation. The song describes the beautiful feeling of walking this transition - like flying through a forest perfectly."

Initiated as a solo project by singer Coldun himself in 2006, COLDUN has meanwhile grown into a veritable formation.

The group is made up of top-class musicians and long-time companions, all of whom have gained experience and competence through various band activities and projects in the last 20 years. 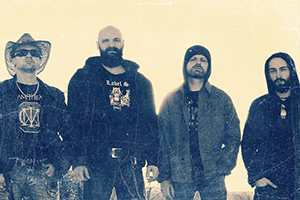 Now the musicians climb the logical next step together with their enthroned throat emperor:
The new and third album with the inspiring title "Grand Sun Ritual" was mixed and mastered in the Priory Recording Studios Birmingham by Greg Chandler (Esoteric) in outstanding quality.

The ATMOSPHERIC PROGRESSIVE METAL of the soulful top experts from the Ore Mountains is once again vocalized in a highly uplifting manner with the absolute grand championship, for which the unmistakably evocative exceptional voice of frontman Coldun stands so uniquely.

With the professional artwork, the authors represent their profound complete works in finest cover and inlay quality: 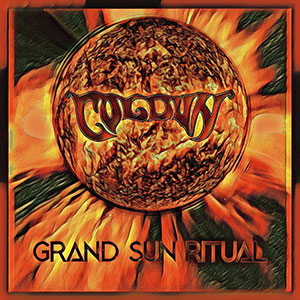 "Grand Sun Ritual", a real soul slurper, shows influences from Doom to Post Metal and connects both worlds, which the tasteful creators love so much.
Thus, COLDUN let atmospheric and deeply rich ambient sounds come together with wild Rock/Metal guitar riffs and drums in an amazingly fluid way, deliciously refined with the classic aroma of 70s guitar and Hammond feeling.
The necessary edge in the often majestic sound image is provided by hard, sometimes even post-black stagings, which can ultimately bring a modern, but always fully genuine and down-to-earth high-class sound to brilliant radiance. 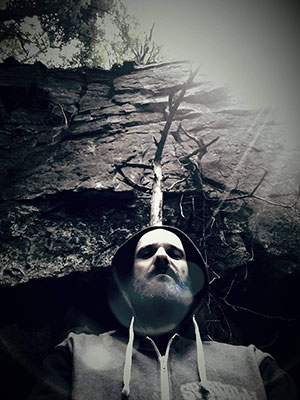 In terms of content, the new long-player revolves around the eternally topical questions of humanity about the respective meaning of life and death.
The thought-provoking lyrics of the songs show a radically positive basic tenor, which stands for Coldun's personal conviction that in death nothing is absolute - and certainly not an end.
In recent years he has developed and cultivated relevant impulses for this insight as a distinctly spiritual character by means of various journeys to areas of the world that are correspondingly revealing for him. (Markus Eck) 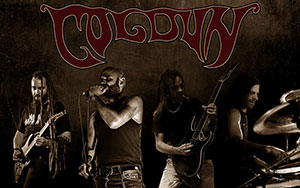 
Official music video to the title song of "Collapsing Polarities":

COLDUN is available for interviews via phone, Skype & email