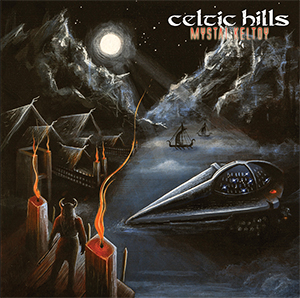 4 / 5
"This Italian power trio gives it all in glorious Power Metal fervor ... a great listening pleasure ... very catchy riffs and beats ... CELTIC HILLS have a sound here that should catapult them to the Metal masses."
(Metal Rules)

86 / 100
"... powerful ... between power, symphonic and classic Heavy Metal ... will not disappoint any listener who was at different times respectively a 'Defender Of The Faith', a fan of the Pumpkins, the German Pirates or disciples of the best Primal Fear."
(Loud And Proud IT)

8,5 / 10
"… a unique album ... singer and guitarist Jonathan Vanderbilt, who can charm with his voice and create the right mood ... is not lacking elements of Iron Maiden, Iced Earth or Metal Church ... extremely attractive ... exceptionally original ... imaginative riffs, addictive riffs and hit melodies are the strengths …"
(Power Metal Warrior)

8 / 10
"… a great, powerful album, which on the one hand never lacks the necessary harshness, but on the other hand, thanks to symphonic undertones, also puts a lot of emphasis on atmosphere and a mystical aura ... catchy tunes galore, where especially singer Jonathan shows his skills …"
(Powermetal DE)

8 / 10
"Powerful and massive ... powerful solos ... dense rhythm ... interesting album ... tells the legends of the Celts living in Friuli and shows a band passionate about certain topics and pays homage to their homeland through music."
(Giornale Metal IT)

8 / 10
"… difficult to assign to one genre ... very varied ... on the one hand there are tracks between Power- and Death Metal as well as numbers that could rather be assigned to Symphonic Metal or even Hard Rock ... technically very well recorded ... songwriting and musicality are creative and diverse, the sound impressively crisp …"
(Rocknews CH)

8 / 10
"… good surprise and great sound ... Power Thrash of the most sympathetic kind ... will make solo lovers happy ... recommended for all heavy fans who like to listen to new bands to get some freshness."
(Soil Chronicles)

8 / 10
"I especially like vocalist and guitarist Jonathan, who has an expressive and powerful voice with good vibrato, giving the songs originality ... also the use of keyboards is different from typical modern Power Metal ... in the songwriting there is a certain light touch of classical and folk ... people who prefer to listen to stuff from the 80s and 90s, but still need new music from time to time should definitely risk an ear."
(Der Hörspiegel)

8 / 10
"Already the first listen pleases ... full of natural energy, full of power, full of melodies ... the heart is formed by melodic Power Metal ... many times lightning finger riffs ... some sounds like a mixture of old Helloween and Iron Maiden ... a more than decent work …"
(Bleeding4Metal)

75 / 100
"What impresses the most while listening is the conviction, the confession as well as the faith that Vanderbilt and his band put into each and every note ... a precious album …"
(TrueMetal IT)

75 / 100
"For fans of eccentric Folk/Power/Speed, there's a lot to like here ... powerful, practical and has an interesting Celtic touch ... amazing what this band does."
(Zware Metalen)

7,5 / 10
"… Jonathan Vanderbilt's voice has developed. In some places he reminds of a young Ralf Scheepers ... thus large parts of the album also sound like old Gamma Ray ... a strong and quite independent album ... hard and with depth …"
(Streetclip)

7,5 / 10
"… melodic, powerful and symphonic, with great melodies, a lot of double-bass, a singer in high pitches and with pompous choirs ... influences of Judas Priest, Primal Fear or Vicious Rumors ... Friends of Italian Metal, but also of Power Metal in general, will surely discover a little cracker for themselves here."
(Crossfire Metal)

7 / 10
"… Power Metal of the harder variety, where I would use Primal Fear and Judas Priest as a comparison ... a plus point is the variable vocals of Vanderbilt, who can sing clean but also sometimes grunt properly ... a good record with an interesting story."
(FFM-Rock)

7 / 10
"… makes your jaw drop first ... by the powerful, strongly played Metal, which sounds like a more epic version of Running Wild, not only because of the voice of Jonathan Vanderbilt, who is also a guitarist …"
(Rock Castle Franken)

3,5 / 5
"'Mystai Keltoy' will blow your mind, so heavy and detailed it sounds, leaving you eager for more once it's over, keeping the fires of Italian Metal burning bright thanks to the great work done by the unstoppable CELTIC HILLS."
(The Headbanging Moose)

"The songs of CELTIC HILLS bring us back to the world of the Celts, whose cult and mystery embellish a truly beautiful album …"
(SOund36)

"… interesting band ... 11 heavy tracks enriched by epic and even symphonic facets, where the powerful and menacing voice of Jonathan Vanderbilt stands out from the setlist soundtracks ... powerful and massive ... the soundtrack of a journey into history …"
(DrumClub Magazine)

"The various influences can be heard very clearly and CELTIC HILLS manage to combine them skillfully. The result is a powerful, varied and intensely penetrating Power Metal album á la Majesty, Hammerfall or Iced Earth with a touch of Machine Head."
(BlattTurbo)

"… very powerful ... like the more extreme sounds of Manowar ... epic moments, power moments, Thrash moments, and this diversity does the album good ... considerable potential, also on a commercial level ... with their sound, reminiscent of a certain Teutonic Metal of the 80s, they could certainly have success beyond the Alps …"
(Italia Di Metallo) 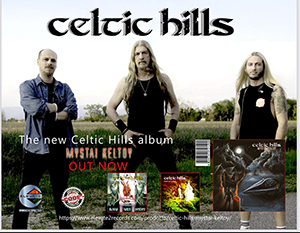 Band comments:
"'After The Earthquake' is a song that tells of the strength and aggregation of the people after the terrible earthquake of May 6, 1976 in Friuli. A text that tells the tenacity, the solidarity for what has gone down in history as the Great Reconstruction of Friuli. A hymn to remain united and help each other during the tragedies that afflict the peoples of the whole earth." 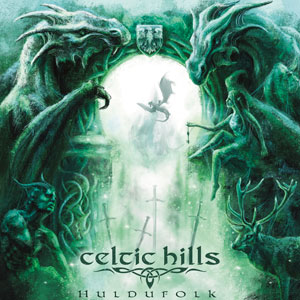 BACKFLASH:
On April 16, 2021 Elevate Records released the official music video for the album song "The Tomorrow Of Our Sons":


CELTIC HILLS are a trio consisting of Jonathan Vanderbilt on guitars and vocals, Jacopo Novello on bass and Simone Cescutti on drums.

The stylistically unwavering formation was brought to life in 2010 - but it was to take a few more years before the world would get wider notice of their rock-solid and independent POWER METAL. Between 2010 and 2020 they circulated their demo "Horns Helmet Fighters" in the underground. 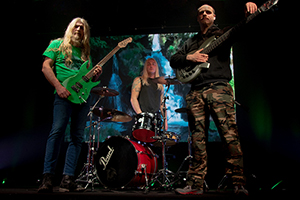 In 2020, the band finally signed a record deal with Elevate Records, which released the debut album "Blood Over Intents" and the EP "Weird Music" in the same year. Both releases received excellent reviews from all over the world, while the music videos for these two works even exceeded the best expectations.

So, with great enthusiasm, CELTIC HILLS decided to go back to the studio to record the second album "Mystai Keltoy", produced and recorded by Michele Guaitoli, vocalist of Temperance, Vision Of Atlantis and Era.

The lyrics of the second long player are still inspired by the history of the peoples who inhabited the territory of today's Carnia and Friuli, but seen with a different perspective, giving voice to the legends (or reality?) that speak of colonization by ancient alien peoples.

Power, speed and good melodic lines characterize CELTIC HILLS. The played style of the fervent Udinians is difficult to classify into a single Metal vein, as there are many influences ranging from Death to Power, with sound elements that can also remind of a certain kind of 90s Thrash. The vocals are also quite varied for a Metal band and may even seem quite unusual to some listeners.