9,5 / 10
"… takes you to the place where this story of pirates takes place, perceiving different sensations through the 16 songs that make up this album … fans of Alestorm, Korpiklaani, Amon Amarth, Arkona and Swashbuckle will love this album."
(Metal Gods TV)

9 / 10
"What really impressed me was that as brutal as their sound is from start to finish … there’s enough melody peppered throughout the album that encourages the listener to sing along when it calls for it … this was fun to consume … shows that there’s a way to expand the genre of Pirate Metal without becoming too generic ..."
(Metal Temple)

12 / 15
"... the combination of violin, hard guitars, driving songs and Death Metal vocals fits like the proverbial fist in the eye ... not only fun is in the foreground, but also serious and profound playing on the instruments ... you can't take out any song explicitly; they all stand for the big picture ... CALAROOK have been up to their necks in trouble for six years - until 2019 they were called Calico - you can definitely tell by their joy of playing ... an audible feast for the ears ..."
(Legacy)

85 / 100
"… pushes with all its forces thanks to the granitic rhythms … a great surprise that deserves to be listened … a continuous assault to the ear that in an hour and nine minutes of recording finds no peace: a total of sixteen songs (perhaps excessive for a debut, but still enjoyable all the same way) that flow pleasantly like alcohol after a successful pirate offensive."
(Heavy Metal Heaven IT)

84 / 100
"Bringing a perfect blend of Alestorm’s folksy fun and Swashbuckle’s Death Metal philosophy is Switzerland’s newest act to toss their tricorns into the Pirate Metal ring, CALAROOK … mighty enjoyable to all the fans out there of this niche subgenre."
(Hated One Metal Reviews & Interviews)

83 / 100
"... a debut album that immediately gives us such a good feeling that we dare to think that pirates with scurvy or plague could have used it for their own good back then... uncork this bottle of rum!"
(Musika BE)

8 / 10
"… a very great sounding Folk Metal band … if you are a fan of this musical genre, you should check out this album …"
(A Different Shade Of Black Metal)

8 / 10
"... a seaworthy first plate ... the caper barge tilts completely in the direction of pirate fun ... often capsizes into the absurd, which does not let the mood drown ... definitive recommendation to buy ..."
(Dark Art)

8 / 10
"CALAROOK sound independent, fresh and unconsumed ... no band is really emulated, but fortunately you don't fall into senseless kitsch either ... between old In Flames, old Dark Tranquillity, Amon Amarth, Skyclad and Korpiklaani ... despite the almost seventy minutes there is no boredom here ... the production is fat and banging ... the phenomenal artwork completes the album perfectly."
(Crossfire Metal)

8 / 10
"The songs are hilarious, you just can´t go wrong with 'Quest For Booze' or 'Invisible Pineapples', especially 'Paul The Parrot' … a fine debut record … I would love to see and hear this band live somewhere, I am sure they make one hell of a party."
(Kraykulla)

7,5 / 10
"'Kicking Flamingos' has that stubborn Scandinavian Death pattern, and even 'Loyal To None but Rum', despite the theme and irony, reaches dark depths of 'serious' Metal … certainly original."
(Metalhead IT)

7,5 / 10
"A thoroughly successful debut of the pirates who have been making the Swiss oceans unsafe since 2014 …"
(Rockmagazine NET)

3,5 / 5
"In a world where people have the attention span of a goldfish, we must admit releasing a 69-minute album is a beyond bold move by CALAROOK … they are not just musicians, but Metal pirates, and as the great privateers they are they know exactly what they are doing by releasing such an imposing and epic album."
(The Headbanging Moose)

3 / 5
"… rocky riffs … excellent choruses … noteworthy … violin punctually enriches the tracks, and even if some pass almost unnoticed, the echo of its melodies is quickly memorized …"
(All Around Metal)

10 / 15
"CALAROOK chose Melodic Death Metal as the musical background for their sailor's yarn. This is enriched with an (omnipresent) violin for the folky touch. Stylistic comparisons with the compatriots of Eluveitie (whose guitarist Rafael Salzmann directed the recordings) and the no longer existing Abinchova are therefore quite justified."
(Folkmetal AT)

6,5 / 10
"… it's easy to appreciate the positive sides that are here … riffs remembering the best moments of Running Wild, weight and, of course, the … violin."
(World Of Metal)

"This one is harder, but without neglecting the fun factor ... the growls are simply worse than with some other combo ... a well-rounded thing ... Pirate Metal with a lot of growling can be nodded along well overall ..."
(Amboss)

"… growling, singing about alcohol and performing in a good pirate fashion … this album is fun to hear … 'Surrender Or Die' is cool."
(Tempelores)

"... a rather changeable playing between extremely hard tones and cheerful violin sounds, which emphasize the primal character of the songs ... mostly the catchy playing styles dominate, to which one can enthusiastically go along ... a successful thing for all those who like to be carried away by nautical sounding things."
(Metalmamas Neuigkeiten)


Since August 28, the Helvetic corsars have been presenting their music video for the title song of the debut album "Surrender Or Die":

It just doesn’t matter whether the five bright privateers from CALAROOK enter stages or auditory canals, because no rum barrel remains full. 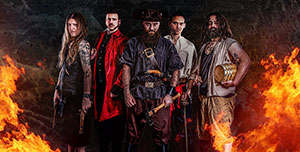 Since August 14, these pineapple fetishists have been presenting their entertaining music video for the album song "Invisible Pineapples":

After the foundation in 2014, their own songs were eagerly written by those involved. In 2017, the no less humorous bullies board the genre with the lively EP "Calico".

The wind and direction were still good for the sworn team and this gave the long-thirsty breakwaters the opportunity to prove their extensive skills at the established Ragnarök Festival in Lichtenfels. 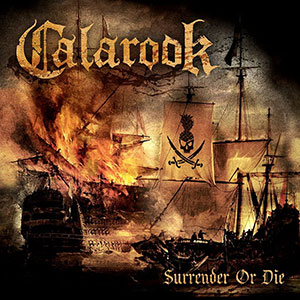 So it goes full steam ahead for CALAROOK – the enormously nourishing debut album "Surrender Or Die" will be launched on September 11ᵗʰ, 2020!

CALAROOK is available for interviews via phone, Skype & email