8,5 / 10
"Those who automatically think of Symphonic Black Metal as bombastic kitsch will be amazed when listening to this CD, because there are lots of blast beats and beat changes to be heard here ... more brute and brutal than ever before ... there is a lot going on here! Despite many ideas and technical finesses, the album always remains straight and comprehensible and comes as if from a single mould ... fans of bands like Dimmu Borgir, Graveworm, Cradle Of Filth or Moonsorrow will certainly enjoy ATRIUM NOCTIS ..."
(Crossfire Metal)

8 / 10
"… great sounding melodic and symphonic mixture of Black and Dark Metal and if you are a fan of those musical genres, you should check out this band."
(A Different Shade Of Black Metal) 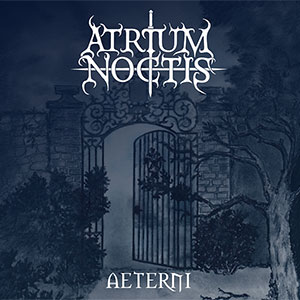 
90 / 100
"'Aeterni' is presented with a simple but impressive artwork, and with a very nice booklet ... and the contained music is of equal thickness. The album, composed of seven tracks, of medium-long duration, opens with 'Datura Noir', and immediately you can see a great taste for the symphony and the decadent melodies."
(Insane Voices Labirynth)

90 / 100
"… a very well thoughtful disc … made to sound differently to others … talent and originality are indisputable … if you like Black Metal with a touch of rarity then this release of ATRIUM NOCTIS is going to interest."
(X Reviews)

9 / 10
"Comparisons to Graveworm, Stormlord or even Dimmu Borgir are certainly not to be dismissed out of hand, but the Cologne have long since created their own style, so nothing should get in the way of a big leap forward."
(FFM-Rock)

9 / 10
"Officiating in a melodic and epic Pagan Dark / Black Metal, ATRIUM NOCTIS offers us with 'Aeterni' a brilliant anthology of their creative talents and many different influences, including among others the Gothic Doom, Melodic Death, Pagan Folk and Classical Music … the richness of the compositions … as well as the diversity of the arrangements are reminiscent of the best periods of Dimmu Borgir …"
(Requiem)

8,5 / 10
"… selection of epic sounds that alternate each other to bring the atmosphere of gripping, dark, pain … harmonization is packed well … quite majestic … feels beautiful even though more dark sound …"
(IRS Media)

77 / 100
"… symphonic Black Metal in which the atmosphere of the nineties is prominently present … the album sometimes has a pompous sound, with some theatrical elements … ATRIUM NOCTIS sticks to the values ​​of the nineties and that certainly gives them a certain charm."
(Lords Of Metal)

7 / 10
"There are discs that more than others are born to recall the past, 'Aeterni' is one of these … manages to show what is right and what should always be done when one firmly believes in something."
(Disfactory)

7 / 10
"… a lot of heart and soul was invested here and created a world of its own."
(Rockcastle Franken)

7 / 10
"After a few minutes your mind will go out to Dimmu Borgir, but I guess that they sound a bit extremer … ATRIUM NOCTIS does focus more on the dark atmosphere."
(Metal Maidens)

"If there are any real new discoveries in Dark Metal, ATRIUM NOCTIS undoubtedly count to that ... should attract some attention with this album in the autumn. No flat Metal attitude, but carefully composed pieces which are both textually and musically demanding, are presented on 'Aeterni'."
(Mindbreed)

"Among my several auditions to 'Aeterni' I’ve also listened to the previous 'Home' and that made me have a notion of the band’s evolution regarding composition. It’s perceivable the presence of classical music in their musical roots that they can easily combine with other sonorities without them losing their essences. The band took 7 years to release a new album but has used well that long period to refine the final result; glad they’ve returned and with such quality."
(Metal Em Portugal)

"'Aeterni' is a Metal album with basic keyboard parts that creates bombastic atmosphere at some points but mostly, it is element that surrounds music with deep, dark aura and sort of melancholy."
(Monarch Magazine)

"'Aeterni' captivates with beautiful melodies from the first minute ... there is no boredom due to the many rhythmic changes and themes in the songs. In the opener 'Datura Noir', for example, ATRIUM NOCTIS create something that many of their genre representatives do not succeed on an album: a wonderfully dark and gripping atmosphere with a driving rhythm ... Pagan Black Metal fans who do not want always hear the usual flute should definitely risk an ear here, it's worth it!"
(BlattTurbo)

"… ATRIUM NOCTIS are broadly based on the popular in the 90s, symphonic Black Metal, which seems almost extinct these days."
(Musikatlas)

"A group that moves into the so-called black symphony, is made up of musicians who have clearly been exposed to classical music education in their country, which from the beginning removes them from style faults and structural errors. They sing in their mother tongue, become interesting in their imposing and lively moments."
(Flight Of Pegasus)

"… the devilish beauty of 'Aeterni' is upsetting … we are not used to that … beauty belongs to angels, not to demons, as common sense tells. ATRIUM NOCTIS prove them wrong."
(Metal Addicts)

"A band that aims to escape from the normality … ATRIUM NOCTIS have two great trumps on 'Aeterni': the vocals pass on an enormous amount of desperation and agony to the neat instrumentalists … and mainly also the keyboards that go from the piano until the technopop sonority of Human League."
(Whiplash)

"ATRIUM NOCTIS is a Symphonic Black Metal band who clearly disdain limitations … for the black and occult vision of the band has conjured complex and substantial musical content … 'Aeterni' is worthy of any serious Black Metal fan's collection … and I entreat to enter their mysterious world … they are absolutely dedicated to their music and their art."
(Vile Views)

"... has something mysterious about it and forms with the melodic instrumentality a set fantasy world ... more varied with numerous arrangements and increasing sound depth ... partly a bit inclined towards the Pagan, so that it becomes more accessible to less blackened ears ... but the driving force behind the whole thing remains very clear and unrestricted Black Metal ... sometimes amplified by elf-like vocals and the almost omnipresent, spherical melodies."
(Metalogy)


Celebrating 20 years as a band, ATRIUM NOCTIS will release their 5th studio album on 2-22-22.

There, the songs in question were completely re-recorded, mixed and mastered for the 60-minute long player.

All the material has been rearranged on three guitars, which gives the overall picture on the one hand more melodic possibilities but at the same time more pressure on the part of the guitars. 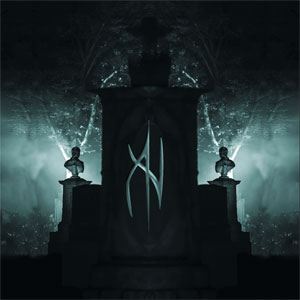 Massive darkness paired with a thick shot of hardness characterizes the new album. Melancholic, sometimes hymnal and soulful passages are also part of it. Epic and colorful nuances enrich the whole additionally fitting. 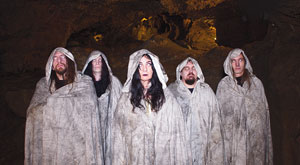 ATRIUM NOCTIS love big soundscapes and have largely broken away from the genre boundaries of Black Metal.

From the old, already convincing songs ATRIUM NOCTIS have understood to create a new dimension, which skillfully balances between hardness and subtlety:
Hard and delicate mix to a unique symbiosis!

The band members have different musical backgrounds:
They include people who have played Metal all their lives, but bring a lot of joy to other musical genres, as well as a deep black soul from Black Metal, as well as a singer with classical training and two studied musicians who are musically open to everything.

So let yourself be seduced and convinced equally by the new sound experience of the Cologne! 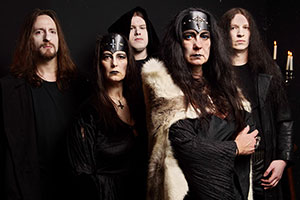 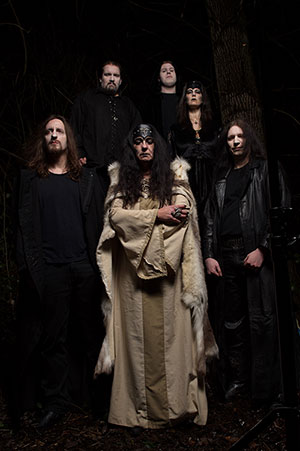