94 / 100
"… beautiful and disarming when it should be, able to react and show muscle when it is needed, melancholy and dark melodic lines … 'The Forgotten Song' is one of the biggest albums of the year and clearly its greatest revelation …"
(Via Nocturna)

90 / 100
"… violins and Kaval, a typical Bulgarian flute … the combination of these classical instruments, the moving female vocals with the sometimes raw male vocals (sometimes even a bit grunted) and Metal provide a wonderful sound … resembles fantasy movies 'Lord Of The Rings' or 'Narnia' … really a CD for a larger audience with some nice music … and as often with top albums: there are no weak songs on it … to dream away with."
(Musika.be)

9 / 10
"Immediately it is clear that this is about authentic music ... AEGONIA have absolutely nothing to do with any Folk Metal trends ... soft and melancholic tunes ... influences from melodic Doom, Gothic Metal from the 90s and Folk ... you hardly believe it that it is a self-published ... not only the songwriting, also the sound is very successful and mature ... music for fine spirits ... absolutely worth supporting!"
(Der Hörspiegel)

9 / 10
"… working on their sound, working on the style and expanding further, it has paid off … AEGONIA leads us away to a magical world, where mystical beings from our imagination are brought up … within a framework that causes peace of mind to descend on us, within a very strange and dark environment … this band can be called a unique gem within Doom respectively Folk centers … worth discovering."
(Musiczine)

4 / 5
"… without a doubt, a really well-made debut album, both in terms of production and stylistic accuracy of lyrics and music … from the vocalists, to the imposing choirs, passing through the pounding guitars, to the more traditional instruments, you can perceive a magical atmosphere."
(All Around Metal)

88 / 100
"… a very atmospheric album, environmental, melancholic, dark, strong and continuous … strongest points of the band are in their Folk / Atmospheric / Doom elements …"
(Darkzen)

8,5 / 10
"The group’s mastery of composition can be found by simply looking at the classical influences on this album alone, which manage to steer the entire album in a neoclassical Folk direction while keeping enough Metal influences in the mix to keep their credibility … a satisfying listen for those who can appreciate the complexity it brings."
(Folk Metal.nl)

8,3 / 10
"… the entire album is very good. So much that they seem veterans in terms of professionalism and musicality … AEGONIA has enough talent to go even further than what they made up for 'The Forgotten Song', but for now, it's a great choice, really."
(Heavy Metal Thunder)

8 / 10
"… well-crafted Atmospheric Metal … seamlessly combines a range of influences in a coherent 70 minutes of melancholy music … a strong debut album that promises greater things to come for this band."
(Lyrical Spell)

7,5 / 10
"… major influence is the rich Balkan folklore … the most remarkable aspect is the clean vocals and violin of Elitsa Stoyanova, adorned in parts by acoustic guitars, flute, riffs and some growls … interesting and original …"
(Sounds From Apocalypse)

7,5 / 10
"… of perfect beauty ... production sparkling clean and crystal clear ... for fans of dreamy and folky sounds, this album is a real insider tip, as AEGONIA will probably remain completely unknown over long distances, even if there is a lot of potential there."
(Crossfire Metal)

7,5 / 10
"'The Forgotten Song', despite being a debut, is a mature and profound work, capable of giving strong emotions to the listener."
(Mister Folk)

7 / 10
"… a beautifully composed and intricate release … complex, carefully woven and at times delightfully performed … a quite magical piece of work."
(Musipedia Of Metal)

7 / 10
"… a great album … fantasy journey, which breathes the atmosphere of Bulgaria, mixed with the Metal of today … we will definitely hear a lot more from AEGONIA in the very near future."
(Metal Maidens)

"If you can start with atmospheric melancholic Folk Metal, you should take some time for 'The Forgotten Song'."
(Amboss)

"This whole spectacle here definitely reminds of Nightwish, but with a very own and slightly folky note ... 'The Forgotten Song' convinces on the entire length through varied, atmospheric and very soulful Metal ... a perfect theatrical musical work …"
(Waldhalla)

"… singer Elitsa, who enchants the listener with her gentle voice ... very dreamy ... balm for the soul ... melancholic ... mystical ... sometimes exudes a homely campfire-feeling ... if you like it atmospheric and gentle, you are well served with this wonderful album, but everyone else should at least risk an ear."
(Bad Black Unicorn)

"… an epic journey … with that melodic punch that makes some metalheads burst into tears … so difficult not to fly away … 'The Forgotten Song' is an album that makes you forget for some minutes all the pain and misery of this sad and lonely world … it’s full of beauty, but not the plastic beauty that the mainstream media want us to believe in."
(Metal Addicts)

"Epic, folky and close to nature, these are terms that come to mind when listening ... two very contrasting voices ... with the clear vocals of Elitsa Stoyanova always bringing a great deal of gentleness, while the sometimes almost threatening croaking sounds of Nikolay Nikolov create opposite feelings ... very mystical ... you can literally sink into these sound worlds."
(Metalmamas Neuigkeiten)

"'The Forgotten Song' is a conceptual album that brings Amorphis' dreaming, the sadness of Katatonia and the fascination of Bulgarian folklore … one of the albums of the year, especially as regards the Bulgarian scene."
(Metal World)

"… interesting change and nice fresh air … a musical journey as they deliver a nice mix of styles ranging from Atmospheric to Gothic Metal … highlight is also the nice harmony of male and female vocals; Elitsa’s soft vocals add a bit of melancholy to the atmosphere whereas the male vocals add the darkness, creating a nice contrast."
(Tempelores)


The great fascination for folklore and its authentic implementation determines the musical and lyric fortunes of these Bulgarian nature lovers since the band was founded in 2011.

In the Rhodopes, the magnificently wooded, majestically towering mountains in South Bulgaria, the stylishly traditional AEGONIA feel most comfortable. 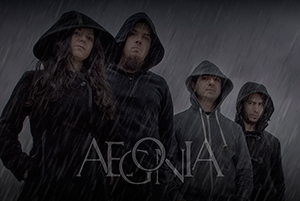 The seductively melodic and enormously atmospheric sound of these expressive aesthetes is based on exquisite ingredients from Doom, Gothic and Fantasy Metal. Most aptly, the quartet's music is described as ATMOSPHERIC FOLKLORE METAL.

With "The Forgotten Song" AEGONIA release their deeply touching debut album, which goes extraordinary quickly into the ear. A noble concept-work that is based on the eponymous fantasy novel by Nea Stand, the first book in the series "Tales From The Lands Of Aegonia". 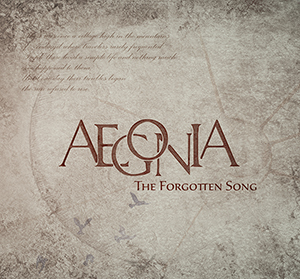 The song "Samodiva" features a sequel to the story told in "The Maid And The Mountain". The accompanying music video was shot at the scenic Krushuna Falls in the summer of 2018. AEGONIA have released this further video on May 27th, 2019. (Markus Eck)

AEGONIA are available for interviews via phone, Skype & e-mail