8,5 / 10
➤ "… an album that you should give your attention to … immersive, varied, imaginative and without fault in terms of production … PHOEBUS THE KNIGHT doesn't claim to be an avant-gardist and fully embraces its influences, but absorbs them to allow itself to sound like no one else … well done … are you tired of listening to Rhapsody Of Fire do Dragonforce? Try PHOEBUS out …!"
(Heavylaw)

8 / 10
➤ "… more Symphonic than Power, with predominance of orchestrations. There are several bands that played with orchestras, PHOEBUS THE KNIGHT doesn't need that, orchestra is implied and an important part of the music …"
(Sounds From Apocalypse)

8 / 10
➤ "… combining Power Metal, symphonic music, Melodic Death Metal and gothic atmosphere … the concept and the musical diversity make the band unique … PHOEBUS THE KNIGHT succeeds with its first album: a brilliant future seems promised to this band. In any case, it deserves it!"
(Power Metal France)

7 / 10
➤ "... majestic ... fat riffs that bang really well ... for the theatrical background there are many choirs ... with focus is the deep, melodic and theatrical lead vocals of Axel 'Phoebus' De Montalembert, which reminds me very much of Powerwolf ... the band is bubbling with ingenuity and goes very varied and detailed ..."
(Crossfire)

3,5 / 5
➤ "… fluent and convincing … characterized … by the baritone voice … excellent instrumental parts … a good Symphonic Power album, suitable both for fans of the likes of Nightwish, but also for those who appreciate Rhapsody … an enjoyable listen …"
(All Around Metal)

➤ "The Phantom Of The Opera! … pleasantly eerie flair that you can not escape ... imaginative guitar playing ... extremely opulent ... what fascinated me personally from the first notes was the voice of Phoebus - clear and deep and also a bit eerie ... also suitable for non-Power Metal fans who are friends of deep, expressive vocals …"
(Metalmamas Neuigkeiten)

➤ "… out of the ordinary … no female singer here, no, it's a man … a voice that we could hear in an opera … even if most of the vocals remain clear, the frontman Axel doesn't hesitate to open up to the growl to surprise the audience and to give more consistency to his interpretation … the production has nothing to envy to the greatest prod that this style can know, quite the contrary …"
(Metal In Veins)

➤ "… imposing bass voice … relied on opera traits to be built up … written to be performed as opera pieces … all the symphonic and orchestral movements make sense … a theatric sense of music that leads the band … mixed altogether with a Power Metal sonic mass … love or hate. There’s no between. I love albums like that."
(Metal Addicts)

This EP consists of a prologue of the story of the fight between Phoebus and his companions against the terrible Beast. It tells the beginning of the French revolution, how the Beast attacked the dwarf city of Baraz Dûm in Island to detonate a volcano that will have a terrible effect on the agriculture in France and trigger the revolution, how the Beast manipulates the people to lead them to violence during la Prise de la Bastille, how Phoebus and his friends will participate in the signature of the Declaration of human rights and finally, how the Beast will kidnap one of the most important ally of the light, the Iron Queen, the last guardian. All of these events will lead to what will happen in their upcoming album, "Ferrum Fero Ferro Feror". 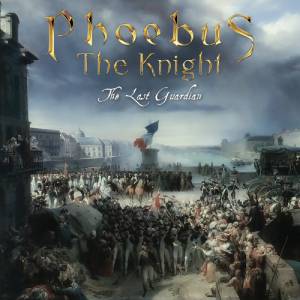 
8 / 10
➤ "A favourite! PHOEBUS THE KNIGHT skilfully manages to use a historical storyline, the French Revolution, and to associate it with an imaginary and fantastic story, putting in duality a troop of knights against a Beast symbolising the evil. It is clever to use the growl and the guttural voice to represent the destruction. The use of a female singer brings an indisputable plus to this band. Adrien's compositional work is effective and captivating. The 5 members have hit hard, undeniably."
(Power Metal France)

➤ "Four well-filled tracks, armed with choral forces with stentorian voices full of chest, orchestral flights worthy of the greatest epics, seizing melodies, supported by sharp rhythms; this is what we get by frank shovelfuls in 'The Last Guardian'!"
(Blastpheme)

➤ "… grand and epic … delivers all the emotions both genres, Metal and opera, can deliver the fan …"
(Metal Addicts)


PHOEBUS THE KNIGHT comments on "The Scarlet Dance":
"The 'Scarlet Dance' is the first epic battle of the album. Phoebus found Selene in the Darkest woods and they're going to fight the Beast with a strategy they came with. For this song, we went with the typical Power Metal riffs and verses, made a long orchestral bridge with some folk surprises after it and a chorus inspired by operatic melodies to make it a long, rich and truly epic song!"


Successfully funded with a Ulule Crowdfunding, "Ferrum Fero Ferro Feror" was made with the 11.400 Euros collected there, thanks to the fans! It is then signed and will be released on Renaissance Records US. 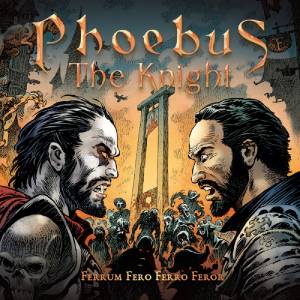 Each track of this truly fantastic debut album is a chapter of Phoebus’ story, the knight alchemist:
from the forgotten dimension of the "Darkest Woods", going through the gates of Hell, to the crucible of Terror in Paris, you will follow Phoebus and his friends the Knights of Heliopolis, in an epic quest to defeat The Beast and his desire for eternal war.

To put all the events in a dramaturgic vision, this collection of songs is a blend of several musical moods, combining heavy ballads, Metal tracks with majestic orchestrations and instrumental parts.
Lyrics are for the most part in English and a bit of French, all performed with the beguiling lyrical bass voice of Axel, in clean and screamed vocals.

And what a solemn stroke of luck master Axel is for the music of the band:
All too seldom has such a noble sublime voice been carved out of such an inconceivably gigantic vocal talent with such immeasurable dedication and downright unearthly diligence!

So you can enjoy classical Symphonic Metal, Melodic Death Metal, musical, medieval pieces and even passages in the style of great masters like Bach, Mozart or even Rachmaninov!

Witness the legendary fight of Phoebus and his friends against the Beast and the vampire knights! To guide you in this quest, the master drawer Mohamed Aouamri (Sylve, Mortepierre) illustrated each chapters and gave life to this world of Fantasy and History. 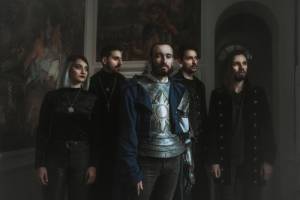 
"Ferrum Fero Ferro Feror", Phoebus' first adventure with his companions, the Knights of Heliopolis, is waiting for you!
Go on an epic and original musical adventure, mixing Symphonic Metal, Heroic-Fantasy and History, written by Axel de Montalembert, composed by Adrien Djouadou and performed by the one and only PHOEBUS THE KNIGHT!

FLASHBACK:
PHOEBUS THE KNIGHT was born in the mind of Axel de Montalembert. Passionate of music, heroic-fantasy, esoterism and history, he created the story of Phoebus and his companions, the Knights Of Heliopolis, melting together heroic-fantasy and history.

To translate his great tale into music, he needed a composer that could write for a Metal band and a full orchestra to give to the story the epic breath it needed. That's how he met Adrien Djouadou, a classically trained opera singer active on established stages and together, they created the whole concept of PHOEBUS THE KNIGHT.

Axel would write the lyrics and naturally, sing them and Adrien would compose the whole music, play the guitar and do the backing vocals. But PHOEBUS THE KNIGHT needed musicians, so they found a great team to play with them on this journey:
Noémie Allet on the bass and vocals, Adrien Guingal on the guitar and Guillaume Remih on the drums. Each member of the band would represent a character in the story of Phoebus and his companions.

Naturally, PHOEBUS THE KNIGHT became a Symphonic Metal band with a whole conceptual and visual universe. They value quality in music, production and work invested by involved parties. PHOEBUS THE KNIGHT finds its roots in bands like Nightwish, Epica, Within Temptation, Powerwolf, Rhapsody Of Fire, Cradle Of Filth ...

PHOEBUS THE KNIGHT are available for interviews via phone, Skype, Zoom & email !